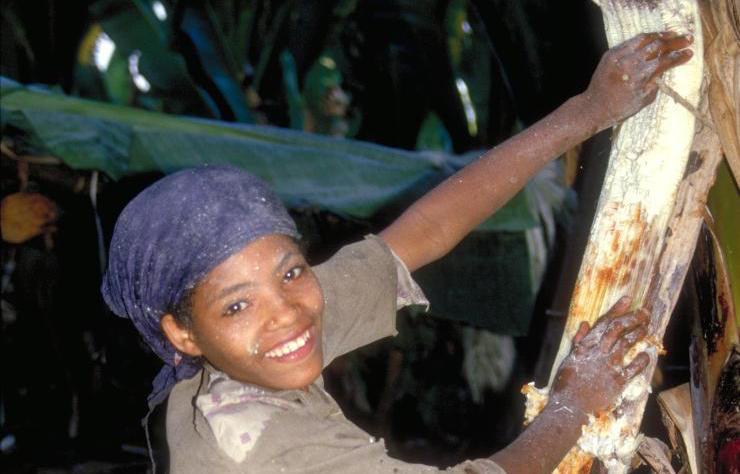 In southern Ethiopia, among the Sidamo and other ethnic groups, wasa is the staple food-crop. It is a dark flour, obtained from a bulb plant called ‘wese’, or in the national language ‘ensete muse’, popularly known as ‘false banana’.

The ‘ensete muse’ requires a portion of a rhizome to reproduce. The most common way to propagate this plant is with pieces of rhizomes called suckers. To propagate a false banana plant from a sucker, one must remove and replant the sucker.

In three years, the plant forms a false trunk, which can be two metres high, with leaves that can be 3 metres long and 70/80 centimetres large. From afar they can be mistaken for real banana plants, though the false banana has much larger leaves that grow lower compared to the real banana tree where leaves grow on top of the trunk.

Only women are in charge of the wasa production. Obtaining this dark flour from false banana plants is not an easy task and men don’t have the necessary expertise. If his wife dies, the husband charges the daughter with the task of making wasa and if she is not able, a relative will do it and will get a reward for her work. If the relative is not available, the third option for the husband is re-marrying, the fourth, starving.

The ensete leaves can be used for different purposes. Women use cow shoulder blades for scraping the leaves. They put the pulp extracted in a sort of bucket, made with intertwined leaves of the plant. Then, they bury the wrapped pulp of the false banana in an underground pit for about two or three weeks. After this time the pulp has turned into dry fibre strands.

The wasa is ready now. It is very dry and greenish; it is often mixed with beans and cooked vegetables, or hard-boiled eggs, and on special occasions it is combined with pieces of boiled meat. Salt and butter are also added to the mixture. The broth that comes from the boiled meat is generally drunk separately, but it can be also poured on wasa to make it softer and more flavourful. The dish is eaten with the hands.

The ensete leaves are multi-purpose. They are used for making wrapped leaves food-containers for wasa. Or also for making mats for sitting. They are used as umbrellas and sometimes as cradles for babies. The petiole-base fibre is used for making resistant ropes. Pieces of leaves can be used as spoons for eating wasa. Banana-leaf filaments after being processed are soft like cotton wool, they can be used as hand grips providing thermal insulation for handling hot pots.

Ensete is high water content, which is beneficial when used as fodder during dry periods. A few years ago, the Ethiopian government decided to destroy entire forests, cutting down the trees in some provinces of the country, and replacing them with maize fields.

Maize has in fact a higher nutritional value and requires less labour than the ensete. But after a few years when the country was affected by drought, farmers experienced maize crop failure that led to famine, since the crop cannot grow without water.

The Sidamo province, instead, where ensete plants were not replaced by other crops, was spared from starvation, since ensete is highly drought resistant. Every day, now, trucks loaded with wasa, reach Addis Ababa’s market from Awasa, located 270 km south of the Ethiopian capital.

As a matter of fact, foods deriving from ensete are not particularly high in nutrients. They are not rich either in vitamins or in proteins. Ensete, alone, is mainly a source of carbohydrates and therefore a poor nutrition source, but, if it is combined with other ingredients it becomes a complete food. Wasa is essential to the life of the inhabitants of the densely populated south and southwestern parts of Ethiopia.

One can tell this even from local proverbs. ‘Wasa and sand do not mix’, for example, which means that good things and bad things never match. Or, ‘Not to spoil the wasa, a woman spared the rat that was eating on the big terracotta tray: she drove it out of the tray just by beating it instead of killing it’. The moral of this saying is that one must accept compromises to save something worthy.

PreviousNigeria: Avocado, the black pear
NextUganda: The art of dance