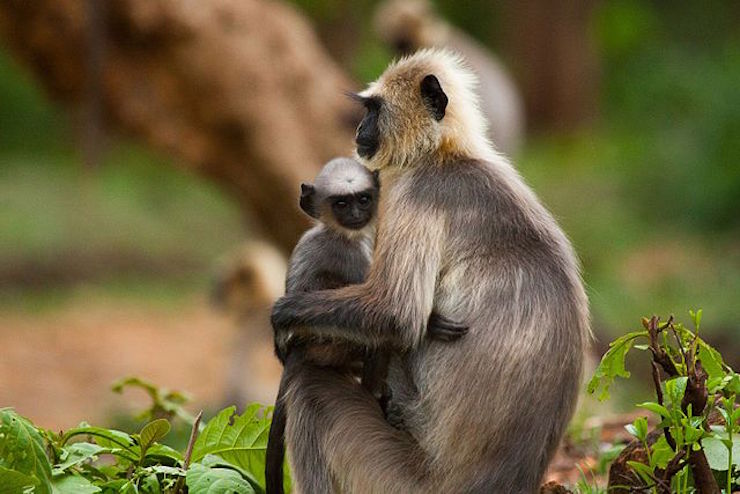 There was once an animal called Ejimm, which had two sons, named Obegud and Igwe. They lived in the forest, near the home of a poor man and wife who had twelve children.

One day these parents left their children at home and went to their farm. While they were away, and the children were singing and playing together the wicked beast Ejimm heard their voices. She sent her son Obegud to their home to say that he had something to sell. The beast did so, and the children asked him to show his wares.

As soon as he had succeeded so far in attracting their attention, he went back singing a song to let Ejimm know that all was well. Ejimm then rushed to the home and stood outside of the gate—a fearful sight! Then she thrust out her long sharp claws, seized a child, and carried it off to her den in the woods.

On their return home from work on the farm, the parents heard from the others that a monster with a very long mouth had killed their child and carried him off.

Long they wept for their lost child, and when the time came to go to the farm the next day, the father told his wife to go alone while he waited at home to catch Ejimm. At first, the woman would not go, but after a while, her husband persuaded her, so she left him and went on.

At noon the beast sent out her other son Igwe, telling him to say what his brother Obegud had said the day before. He did so, and again the children asked him to bring out his wares. He then ran homeward, singing another song to signal to Ejimm that all was well.

When Ejimm heard this, she again came out to take one of the children. She came to the gate as before. The man was well armed, but at the horrible sight of the beast, he lost his courage. He ran for his life through the forest. He left his children helpless before the greedy monster.

Ejimm, then, seized another child and carried it off to make a great feast.

When the mother returned and learned that a second child had been taken, she was heartbroken. With her eyes filled with tears, she turned fiercely on her husband and asked why he had not saved his child.

To cover up his cowardice, he told her that he had become suddenly sick, and had had to leave the infants for a while, and during his short absence, the monster had come and had taken another. The children, however, all cried out, “No, Mother, Father fled in terror at the sight of the animal and left us to face the danger alone.”

The mother was angry at him for his cowardly act and drove him away. He did not need to be told a second time. He went out and hid in the woods nearby.

The mother said she would risk her life to save her children. She got a very sharp sword and waited for the beast, which came again as before, and thrust her head through the gate to seize a child. Then the woman took courage, faced the danger, and killed the beast. The children gave loud shouts of joy.

The father, who had heard all of this came from his hiding place in the hope that all danger was then over. Obegud and Igwe, the two sons of Ejimm, however, had heard the noise of the struggle, and now rushed out to the aid of their mother. When the man saw these other two monsters he ran back to his hiding place, but the woman held her position and was not afraid. She saved her children and killed the beasts.

When the mother had finished the fight with the beasts, out came the worthless husband from his hiding place, and asked for a knife, that he might divide the flesh of the beasts between himself and his wife. The best of the flesh he kept for his share and gave the heads only to the woman who had saved the children and had slain the beasts.

To this, the mother of the children refused to agree. She called upon Master Obassi to decide between her husband and herself. To whom did the flesh of the beasts belong?

Obassi heard her cry and sent a messenger to bring them before him. When they arrived, the wife stood forth, bowed, and said: “After promising to fight Ejimm and protect our children, my husband ran away, and left them for the monster to kill. I am the one who stood forth fighting, and slew, not only the beast but also her two young. Yet my husband desires to give me only the heads of all these animals. I come, then, to claim my right before our Master.”

Obassi then asked the husband what he had to say in defence of taking such a large share, but he could not dispute what his wife had said.

It was clear to Obassi that the wife had the brave heart to defend her children when their father had fled in fear. Obassi scolded the husband for deserting his children. He, then, gave order that from thenceforward no man should claim any property which his wife had risked her life to get.

Obassi also said, that, should the wife choose to take the other ten children away from her husband, she should be permitted to do so; for she had suffered much for their sakes.

A woman is sure to risk her life for her children, though there are but few men who will do so.

It is because of this decision that when a woman leaves her husband and returns to her parents, she may be forced to give up all gifts received from him, but not her children, nor any other thing for which she may have risked her life.