Oral literature: Peace among the animals 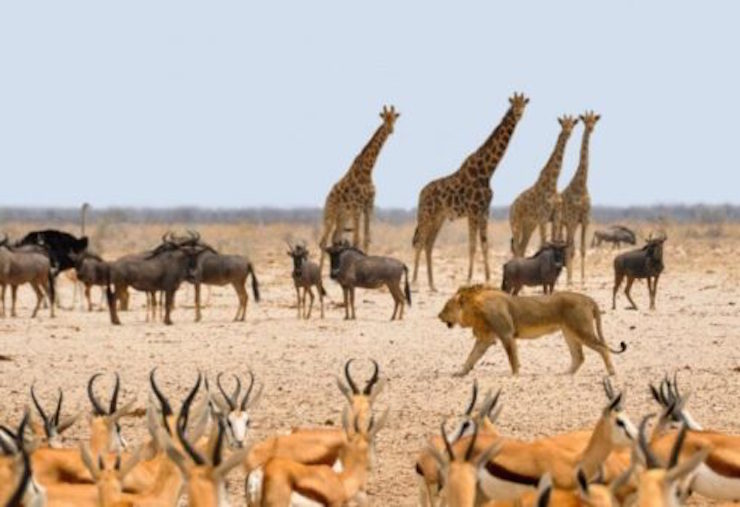 The sun rose in a clear sky and shed its morning light on the peaks of the mountains highlighting their rocky ridges. As the sun rose higher, its brightness crept lower until it illumined fields of wheat that flourished at the base of the hills that form the mountainous kingdom of Lesotho.

It was the end of the harvest season and Hen, one of the first awake that morning, surveyed the scene from her position on top of one of the wheat sheaves. Suddenly she heard a yapping sound in the distance near the foothill that captured her attention and interest. When she saw the sunlight dance on the black-and-white back of the figure that lumbered towards her, Hen recognised him as Black-backed Jackal and she was immediately on her guard.

As Jackal approached her throne of wheat, he threw her a greeting, “Good morning”, Hen. “The same to you, Jackal,” she replied.

Jackal had been out scavenging and it had been a lean night. But Hen was out of his grasp in her elevated position and cunning, sly Jackal began to devise a way of getting her back onto the ground where the playing fields were level.

Looking up at her with his short, sharp tan snout and pointy ears like those of a fox, Jackal said persuasively, “Hen, do you know that peace has been declared in the animal kingdom. Imagine that!”

“There is peace among the animals?” said Hen surprised. Keeping her eyes fixed on both Jackal below and the surrounding areas, she questioned his statement. “You say that no animal may kill another animal?” “Yes,” said Jackal, suddenly side-tracked by the sight of a rat that scuttled under a nearby sheaf.

“The chiefs met and made this declaration.” “I see,” said Hen. But she knew of Jackal’s cunning ways and so she doubted him and his word. Strutting up and down the pile of wheat, Hen repeated to herself, “Peace has been declared in the animal kingdom,” as if repetition of the words would convince her of the fact.

Growing impatient and increasingly more famished, Jackal said to Hen, “Why don’t you come down from the top and we can discuss the matter of peace further. I am straining my neck.”

Hen looked down at Jackal with disbelieving eyes. “Perhaps we can even enjoy a little snuff together,” he suggested, trying to entice Hen down.

But Hen was full of doubt and was very suspicious of Jackal’s conniving ways. She strutted anxiously on top of the wheat, pondering what Jackal had told her. Every now and then she scanned the horizon, watching for impending danger.

“Hen, you seem distracted – observed Jackal – What is of such interest to you up there? Why don’t you come down?”

“Why should you be worried, Jackal? There is a peace pact now among all the animals, so no lives are in danger anymore.” “That is true,” said Jackal, feigning interest in a passing beetle.

“Well, I’m sure it isn’t of any interest to you to know that I see a group of dogs approaching,” said Hen nonchalantly. “Dogs?” Jackal was almost immobilized by fear. But then the thought of dogs chasing him, caused him to start moving in the opposite direction.

“I must take my leave of you, Hen” – he said. “But why are you departing?” asked Hen surprised. “What about the peace pact among all the animals?”

As Hen cackled to herself, Jackal replied in haste, “Oh! I think the dogs must have missed the meeting.” Sly Jackal’s plan had backfired on him. When Hen next looked, Black-backed Jackal was far down the dusty track. For once she had not been deceived by cunning Jackal. She had ensnared him with her own tall story.