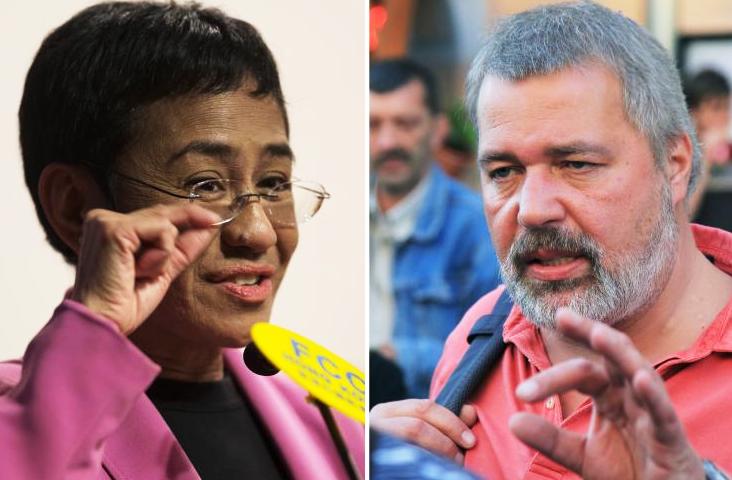 The Norwegian Nobel Committee has decided to award the 2021 Nobel Peace Prize to Maria Ressa of the Philippines and Dmitry Muratov of Russia for their efforts to safeguard freedom of expression, a precondition for democracy and lasting peace.

In its press announcement, the Committee stated that “ Ms. Ressa and Mr. Muratov are receiving the Peace Prize for their courageous fight for freedom of expression in the Philippines and Russia. At the same time, they are representatives of all journalists who stand up for this ideal in a world in which democracy and freedom of the press face increasingly adverse conditions.”

The statement continues: “Free, independent and fact-based journalism serves to protect against abuse of power, lies and war propaganda. The Norwegian Nobel Committee is convinced that freedom of expression and freedom of information help to ensure an informed public. These rights are crucial prerequisites for democracy and protection against war and conflict. The award of the Nobel Peace Prize to Maria Ressa and Dmitry Muratov is intended to underscore the importance of protecting and defending these fundamental rights.”

The pair being called “representatives of all journalists who stand up for this ideal”, have worked tirelessly to defend and uphold freedom of information with a firm conviction that citizens have a fundamental right to get the facts, right. A right that is so crucial in this day and age when lies, disinformation and fake news abound.

Dmitry Muratov dedicated his award to six contributors to his Novaya Gazeta newspaper who had been murdered for their work exposing human rights violations and corruption. “Igor Domnikov, Yuri Shchekochikhin, Anna Politkovskaya, Stas Markelov, Anastasia Baburova, Natasha Estemirova – these are the people who have today won the Nobel Prize,” Muratov said, reciting the names of slain reporters and activists whose portraits hang in the newspaper’s Moscow headquarters.

Maria Ressa , who has faced years of legal cases in the Philippines over the work of her Rappler website, said the prize would help her organisation’s mission. “We’re going through a dark time, a difficult time, but I think that we hold the line. We realise that what we do today is going to determine what our tomorrow is going to be,” she said.

The prize is the first Nobel Peace Prize for journalists since the German Carl von Ossietzky won it in 1935 for revealing his country’s secret post-war rearmament programme.

Muratov, 59, is the first Russian to win the peace prize since Soviet leader Mikhail Gorbachev in 1990. Gorbachev himself has long been associated with Novaya Gazeta, having contributed some of his Nobel prize money to help set up the paper in the early post-Soviet days when Russians anticipated new freedoms.

Ressa, 58, is the first winner of a Nobel prize in any field from the Philippines. Rappler, which she co-founded in 2012, has grown prominent through investigative reporting, including large scale killings during a police campaign against drugs.

In August, a Philippine court dismissed a libel case against Ressa, one of several lawsuits filed against the journalist who says she has been targeted because of her news site’s critical reports on President Rodrigo Duterte.

“This is the first Nobel Prize ever awarded to a Filipino citizen. The fact that it is awarded to a woman and a brilliant journalist, Maria Ressa, distinguished for her professionalism in the current political situation in the Philippines, can only help Filipinos who love democracy proud and full of hope”, said Msgr. Pablo Virgilio David, Bishop of Caloocan, President-elect of the Bishops’ Conference of the Philippines.

“This award could not have been more timely than now as the country is preparing for the upcoming elections in May 2022”, pointed out Bishop David.

“Many people see in this event the only hope of saving our institutions from being destroyed by populist demagogues or authoritarian leaders. In the context of the seemingly endless pandemic crisis – continues the bishop – the political battlefield for the elections has been practically transferred into the virtual arena of modern social media platforms”.

This is where Ressa’s efforts come in: “She has done extensive research into how public opinion is virtually under the control of well-funded political cybercriminals. She has documented well how these people have hired armies of well-paid trolls who maintain countless fake accounts and constantly flood social media with fake news, bombard those who speak the truth with swear words and the crudest forms of vulgarity, veiled threats and cyber-harassment of all kinds”.

Bishop David said: “The fact that this petite woman with a great soul, who dared to give a voice above all to the voiceless widows and orphans of the so-called ‘war on drugs’ is now in the spotlight of world attention, can only make us hope for the best”.

The Nobel Peace Prize will be presented on Dec. 10, the anniversary of the death of Swedish industrialist Alfred Nobel, who founded the awards in his 1895 will.