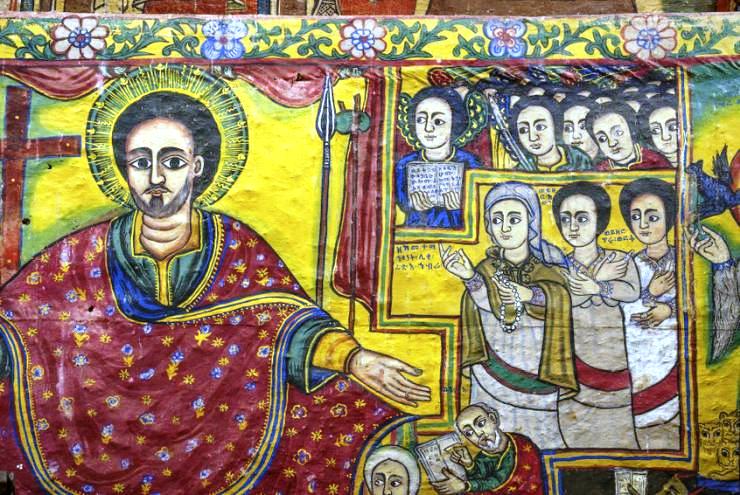 The spirit of Ethiopian Christianity is expressed not only in works of great architectural merit and originality, but in a wide range of artistic creations: in wall paintings – together with architecture, they represent the most relevant aspect of the artistic richness of Ethiopia -, illuminated manuscripts, processional crosses, books of benedictions, and in liturgical furnishings.

A good example of extraordinary wall painting is found in Gondar. This painting is quite recent, most probably from the end of the eighteenth or beginning of the nineteenth century, and it has become a symbol of Ethiopian Christianity. In fact, it is one of the images that are more frequently associated with Ethiopian monasteries. It is the firmament of winged cherubs’ heads, lined up to nine in sixteen rows, that covers the ceiling of the church of Debra Berhan Selassie. Gondar, the former capital of Ethiopia, is famous for its castles and the ruins of the Royal Enclosure, but old churches rival civil buildings for beauty and architectural features.

The walls of the church of Debra Berhan Selassie are covered with paintings. This is perhaps the most venerated church in Gondar. The place where the faithful come more often to pray and to admire the paintings that so vividly speak of their faith: the Nativity of Christ, the Trinity, Christ on the cross, life and passion of Jesus, King David playing the harp, St. George slaying the dragon, Muhammad on a camel drawn by a devil, and a lively representation of hell.

More famous of Gondar, for its churches and monasteries, is Lalibela. However, there are many other areas with a high concentration of religious buildings. One is the region of Tigray, between the towns of Adigrat and Macallé, the other that of Lake Tana. The historic churches of Tigray are usually rocky churches. Most of them are totally or largely excavated in rock or built with the adaptation of caves and crevices.

One researcher, Teweldemedhin Yosief, has counted one hundred and twenty such churches in Tigray. Yet, given the size and characteristics of the area, and the fact that the churches are scattered throughout the territory, the Ethiopian scholar does not rule out that there are still other uncharted churches, perhaps some that are no longer in use and of which people lost the memory. In fact, even those churches that are well known are well guarded by a land rich in cumbersome cliffs and incredible rock pinnacles that rise from the plateau. It is difficult to reach some of the monasteries and the very area seems made for hermits.

A good example is the church of Debra Maryam on Korkor Mountain. The church dates from the thirteenth century and to reach it one has to climb a narrow cleft that rises from the base of an imposing cliff. Once the top of the cliff has been conquered, the visitor has to follow an uneasy path. After climbing for about an hour, the church suddenly appears like leaning at an angle on the rock.

Debra Maryam seems protruding from the face of the mountain with its two white outer walls, crossed by two rows of green-yellow-red stripes. Inside, mostly hewn in the rock, one sees three aisles, two rows of columns that join in an arc, paintings on the walls and even two “domes”, a feature often present in the rock churches of Tigray.

Once the visitor moves s few steps beyond the church, he will realize that this place of worship in the back of beyond is also part of a microcosm with its own micro-economy. There is an elderly monk in charge of the church who lives in a poor cave dwelling; there are others who live as hermits in caves connected by passages to Debra Maryam.

One can be excused if he is surprised to see children or even a kid with a plough pulled by two oxen working a piece of land. The surprises are not finished. Following a path that runs around the mountain top where Debra Maryam is dug, there is a sort of narrow balcony that overlooks a breath-taking view of the surrounding mountains: natural skyscrapers that emerge from the plateau. Below, a sheer drop of several hundred meters.

The structures of the rock churches of Tigray do not follow strict architectural patterns. This only adds to their charm, for each – the most suggestive are Medhane Alem Kesho and Debra Tsion – has a unique story, one episode of the extraordinary effort of the local people to conquer nature and use it to elevate their souls to the divine. The mingling of environment, landscape and human intervention to create the churches of Tigray results in a priceless treasure. Unfortunately, many of the churches are in urgent need of restoration, as the failure of some parts of the rock inside Debra Maryam and the poor state of preservation of many paintings tell us. There is a huge heritage to save and not much time to intervene.