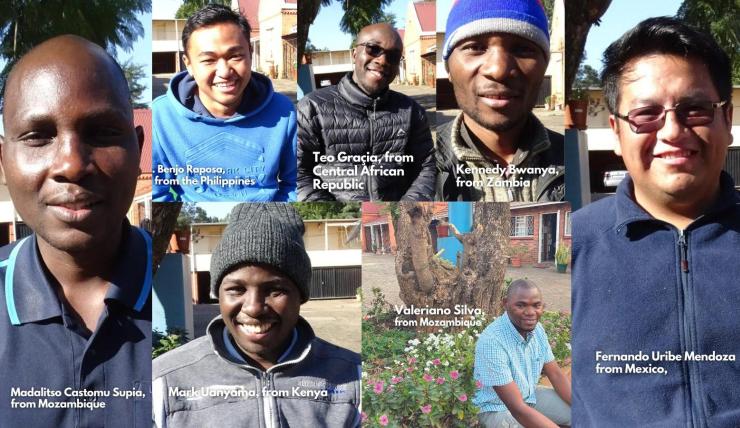 Theology students hailing from various countries are preparing themselves to become priests with the Comboni’s. They share their vocation story.

Benjo Raposa is from the Philippines, 33 years old. He said: “Since childhood, I dreamt of becoming a missionary, especially during high school. I read missionary stories and magazines that motivated me. I continued my education till university graduation, but the desire was still present. The path of the Mission was a way to return to the Lord, other blessings received in my life.”

He continues: “I am grateful, even if this life is not easy. There are difficulties, like everywhere, joys and pains, but you learn from everything, and that matures you. When I started the formation, it was a different life for me; being away from family, friends and cultures you´ve grown up with; you are assigned to a different place, with new people and their life stories.”

From Mexico, Fernando Uribe Mendoza, 27 years old said: “My uncle is a Comboni Missionary. Since childhood, I was interested in what he was doing and there started my desire to follow in his footsteps. He was explaining to us his mission reality during his holidays. I used to go with him to activities and meetings. I realized that my family was not only the natural one, but the Comboni brothers are also a family. About the difficult moments, I consider myself a relaxed person, so I haven´t found a lot of difficulties; I like new things that motivate me.”

Mark Uanyama, from Kenya, 27 years old, said what has inspired him to be a priest.  “I was born into a Catholic family. When I was very young, I was led to the practice of the faith. That inspired me to become a priest. I didn´t know about the missionaries until high school when a missionary came to celebrate Mass and brought us a calendar. One of its titles was: ‘Why not become a missionary?’ Priesthood, as a vocation, is something very respected in my village; people see you as successful in life, and they create distance; there is so much respect that you cannot be free; they see you as a great person, a holy one, and they don´t allow you to do anything at home. It is a gap, created in the name of respect.”

For Teo Graçia, from the Central African Republic, becoming a priest at 31 years, has not been easy. “I was born into a Christian family and most of my fathers´ friends were priests. I had the desire to become a priest, but I didn´t know anything about missionaries. The most difficult thing was to inform my family. It was not easy for them to accept it because we are not so many and my father’s plan for me was to support the family. It was a shock for him and I had to cut the relationship with my family for a while, but afterwards, he accepted it and we reconciled.”

Kennedy Bwanya, from Zambia, 28 years old. He confirms: “I desired to serve the people as a missionary since I was very young. I decided to follow religious life, seeing the injustices in society. I didn´t have to make too much effort with it, but the culture is different from one country to another.”

From Mozambique, Madalitso Castomu Supia, 29 years old expresses the desire to share the faith. “The desire to become a Comboni Missionary didn’t occur to me in a specific moment. I come from an evangelical family. When I entered the Catholic Church, I wanted to be someone that could preach and have the opportunity to share my faith. Then, I heard about a vocational group. It was difficult to choose the congregation, but I just wanted to become a missionary. Most people think that a missionary has a lot of money, cars, and is always helping people, and that is difficult to deal with. The other issue is celibacy. In Africa, it is difficult to understand our way of life; people see it as a lack of blessing. Some family members will ask you: are you really fine? How can a man decide not to marry? When you are at home it is a real challenge as you find all your friends and brothers are married.”

Valeriano Silva, from Mozambique, 28 years old (VS), he shares: “ I came from a Christian family, though most of my family are Muslims, but till now I didn´t have any conflict. We try to understand each other. In my parish, from 1959 till 2017, the only congregation was the Comboni Missionaries. From their experience, I thought that maybe I could be one of them. It was not easy for my parents to accept it. In my culture, the one who takes the decisions is not the father, but the uncle from the maternal side. I explained it to him and he gave his consent. Another difficulty was that in secondary school I had a beautiful girlfriend and the relationship was very strong. It was not easy for her to understand my decision.”

PreviousMission Diary: “I consider myself a “gardener of the Word”
NextOral Literature: The monkey and the crocodile