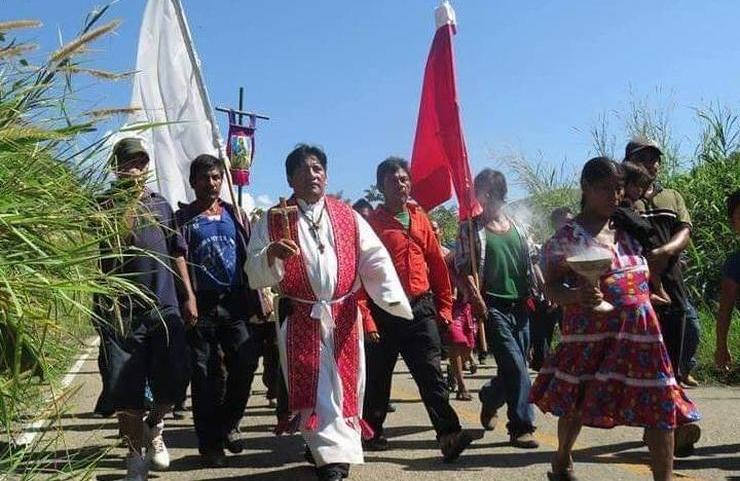 The daily life of a Mexican priest, threatened with death and target of an organized smear campaign launched in response to his fight for justice and truth. Father Marcelo Pérez has refused police escort.

It’s two o’clock in the morning when Father Marcelo Pérez receives a threatening phone call from an unknown individual, identifying themselves as ‘Colonel’, threatening him and his team.

Death threats are not new to him, but in recent weeks they have become more frequent. The day before he received that phone call, a vehicle had followed him for about 30 minutes, then some individuals got out of the car and stared at him when he stopped to talk to some people. The priest noted that the occupants of another vehicle had joined the first group and were constantly staring at him. Father Marcelo remembered that, a week earlier, a van had followed him from Huitepec to the town hall of San Juan Cancuc.

Father Marcelo is not afraid. During his first post as a priest, in Chenalhó, the survivors of the Acteal massacre, which was carried out, in 1997, by paramilitary forces who killed 45 Totzil indigenous people, taught him ‘to talk, build peace and walk with the people’ regardless of the consequences.  “I am aware that they can kill me at any time. I have faith in God. Peace is more important than my life”, says the priest.

Father Marcelo is an indigenous priest and human rights defender based in Simojovel. He currently coordinates the Social Pastoral of the Province of Chiapas, which integrates the Dioceses of the municipalities of San Cristóbal de Las Casas, Tapachula, and Tuxtla Gutiérrez. He actively supports and collaborates with organizations and groups of the religious indigenous movement such as the Pueblo Creyente por la Defensa de la Madre Tierra which promotes the collective rights of indigenous peoples and denounces projects that threaten their beliefs and their autonomous living.

In his 10 years of service in Simojovel, the priest received several threats.  At first, a price of 150,000 Mexican pesos, about 6,000 euros; then one of 400,000 (17,000 euros) and, finally, another price of one million (over 40,000 euros) were put on his head. “I denounced generalized and structural violence, and I was not scared to say that the country was ruled by narco-politicians”. Father Marcelo also leads pilgrimages and activities related to issues such as access to healthcare, poverty, and violence.

The priest has also collaborated with the Tsotsil, Tseltal, Zoque and Mestizo peoples, supporting the fight for the defence of the lands and the rights of these populations, mediating conflicts, and assisting displaced communities. This courageous priest also offers his help to migrants and to all those who have been criminalized for their commitment to the defence of human rights.

In July, the Fray Bartolomé de Las Casas Human Rights Center (Frayba) and the Swedish Movement for Reconciliation (SweFOR Mexico), expressed concern about the acts of criminalization towards the priest, Marcelo Pérez, for his work in the defence and promotion of human rights. They indicated that the defender has been the victim of ‘delegitimization, defamation and constant discredit’, and since the beginning of this year the attacks have intensified. The last extremely serious criminal act, an assassination attempt, was perpetrated in August.

In recent weeks, national and international institutions, joined by the Swedish cardinal Anders Arborelius, have denounced the criminal acts against Father Marcelo. The state government offered the priest a bodyguard, but he refused for several reasons: first of all, because having a bodyguard goes against the Gospel and his pacifist principles since ‘a bodyguard is authorized to kill’, and then, Father Marcelo is not fighting for his safety but for that of the other people. He says “I could never accept to be protected and safe while others are not”. And besides, he doesn’t trust the police either.

There is a campaign to stigmatise Father Marcelo on social networks, as well as illegal monitoring of his activities in addition to public stigmatization by the mayor of the municipality of Pantelhó, in the state of Chiapas.

Father Marcelo thinks defamatory statements have to be related to the reaction of the political parties, which he has often accused of corruption, and to armed groups operating in the state of Chiapas. Messages posted on social networks also include death threats against the priest.

The Bishop of the diocese of San Cristóbal, Rodrigo Aguilar Martínez has taken a clear position on this matter and has declared that any act against Father Marcelo is an act against the Church. The bishop has also added that: “Father Marcelo is a faithful servant of God, he is in communion with the spirit of our diocese and he is committed to sharing the Gospel with the community”.