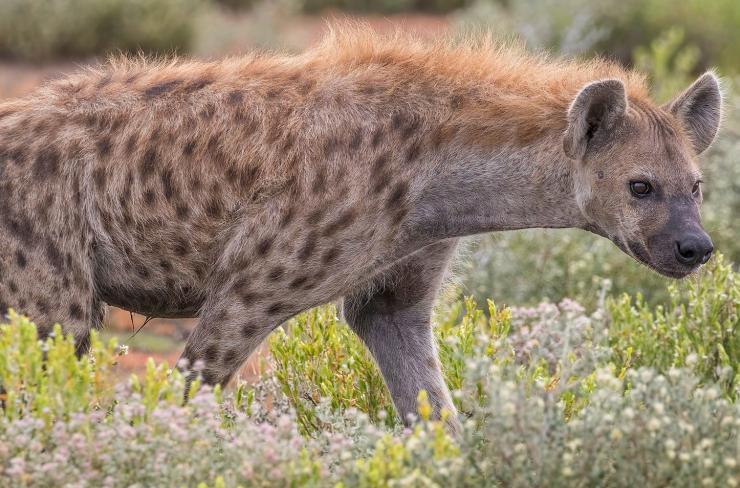 Once upon a time, there lived a spider, whose neighbour was a hyena. One day the spider and the hyena decided to go together to the river. When they reached the banks of the wide river, they met the king of the river.

“Long may you live,” said the spider and the hyena to the king of the river, saluting him.

“Greetings to you,” said the king of the river, and as a present, he gave them many fish.

After the king of the river had left them, the spider and the hyena made a fire. The spider sat beside the fire cooking the fish and as each fish was cooked, he threw it over his back so that it should lie on the bank and grow cool. But each time the spider threw a cooked fish over his back the hyena caught it and ate it. When the spider had finished cooking the fish, he turned around to begin eating them. He saw that there were no fish left and he knew that his neighbour had eaten all of them. Tears of anger came into the eyes of the spider.

“Why do you weep? –  the hyena asked – Is it because I have eaten all the fish?”

No, – replied the spider – you know that when one sits near the fire one’s eyes become tired and there are tears.”At that moment a parrot flew past the spider and the hyena, a bird with feathers of many beautiful and bright colours. The spider thought to himself: “ Now I shall have revenge upon the hyena.” He said to the hyena: “Did you see that parrot with the feathers of many beautiful and bright colours?”

The hyena said he had seen the parrot and had admired its plumage. “It is I, – said the spider – who gave the bird her colours.” “Please, spider, – the hyena begged – will you colour my fur in the same way?”

The spider agreed to colour the fur of the hyena. “What shall I pay you? –  asked the simple hyena. “Pay me nothing. – the cunning spider replied – Only do whatever I tell you to do.”

The spider listened to the words of the grateful hyena, and then told him to go and get a very long rope of strong leather. When the hyena returned, he brought with him a very long rope of strong leather. The spider told him to lie down beside a tree and tied him tightly to it. The spider then took a piece of wire and put it in the fire on which the fish had been cooked. When the wire was red-hot, he took it to the hyena and burnt him with it.

As the spider burnt the hyena, the spider said: “Now you have your reward for eating all the fish.” When the spider had finished burning the fur of the hyena, he went away, leaving the hyena tied to the tree.

When they did this, the hyena quickly put the white ants into his mouth and swallowed them. They gave him enough strength to return, very slowly, to his house. For a long time, the hyena lay sick in his house. While he lay there a jackal came to him and helped him.

Finally, the hyena gained his strength, and getting up from his mat went to the door of his house. “You are now strong and in good health again,” the jackal said to the hyena.

“That is true – the hyena replied – but my fur is still marked in stripes where the cunning spider burnt me with a hot wire.” That is the reason why hyenas were given stripes, and from that day on all hyenas have had stripes on their fur.