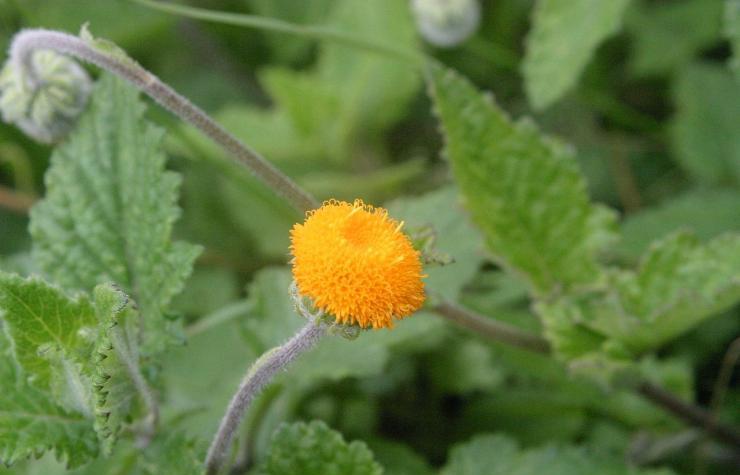 It is a flowering herbaceous plant that is widely distributed in the sub-Saharan Africa including Burundi, Cameroon, Kenya, Rwanda, Uganda, Tanzania, Zambia, and DR Congo.

Crassocephalum vitellinum (Benth.) S.Moore (Family Asteraceae) is one of the many medicinal plants used for the treatment of a number of diseases throughout its distribution range. It is an important plant used in the treatment of peptic ulcer disease. In this, the aerial parts of the plant are boiled with water and the decoction is administered regularly for management of the peptic ulcers. In some communities,

In some communities, the leaves of Crassocephalum  vitellinum are used for the treatment of female sterility, dysmenorrhea, childhood diseases, and as well can be administered to facilitate the delivery of placenta. The leaves are also vital in the treatment of herpes zoster, fever, oral candidiasis, syphilis, tumours, uterine pains, headache, and can also be used as an energy booster across many communities.

The filtrate made from the crushed leaves and flowers of Crassocephalum vitellinum is combined with extracts from other herbs such as Plantago palmata Hoof.f. and Physalis peruviana L. and administered for treatment of whooping cough.

The leaves can also be used for the management of anorexia and for antenatal care. In some communities, traditional healers pound the fresh leaves of Crassocephalum vitellinum and soak them in cold water and the resulting liquid is used for constipation, abortion, and as well as treatment of sexually transmitted diseases, especially gonorrhoea.

The sap obtained from the crushed leaves is used for the treatment of eye infection, boils, anaemia, poisoning, diarrhoea, and fresh wounds. The leaves are burnt with those of the cultivated yam and the ash is applied to scarification for the treatment of swollen legs.

Apart from its use as human medicine, the leaves of Crassocephalum vitellinum are also used in veterinary medicine for treatment of mastitis, fever, and to facilitate lactation. In some communities, Crassocephalum  vitellinum plant is cultivated as a source of nutritional vegetables.