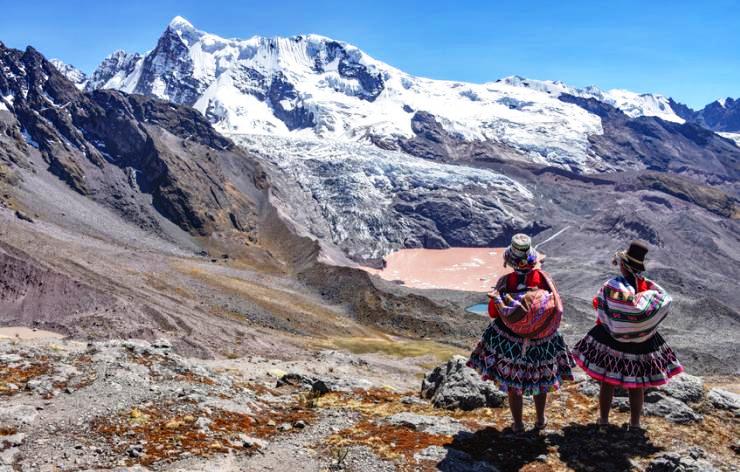 Andean Chakana is the symbol of the principle of relations with people and nature. It is the cosmic bridge between three communities: human, natural and supernatural.

The Quechua term Chakana is composed of two words; Chaka means bridge and na is literally a syllable or a consonant but, in the Andean world, evokes a sense of reciprocity. It is expressed between two persons, communities or cultures in the actions of daily life.

In the Andean view of the world, Chakana refers to the Southern Cross, present in space which is represented by the Tawa Ch`askas (four stars) and is the symbol of the communication of the Andean peoples with other spaces. With reference to this territorial space, it marks the four cardinal points, North, South, East and West. This is closely connected to Andean cosmography. In geometric terms, we may say that the Andean Chakana is a cross with three angles on each of its sides, both above and below, making a total of twelve. It is also related to time in which the twelve angles symbolise the twelve months of the Andean calendar and the four extremities represent the four seasons of the Andean world.

In a spatial sense, the vertical part unites the three existential spaces of the Andean cosmic view: the Janaq pacha (sidereal space), the Kay pacha (space in this place or this world) and the Ukhu pacha (space of depth).

The horizontal part with its four cardinal points is represented by the Tawantinsuyo (the four parts) of the political organisation of the Inca Empire which are: chichasuyo, contisuyo, antisuyo and collasuyo. In a sexual sense, the Chakana represents both male and female: the vertical part represents the male and the horizontal the female. Anthropologically, one would say, qhari-warmi (man-woman). In this way, the principle of parity or duality is present since it can never be ch`ulla (disparate).

Among the Andean peoples, the Chakana was and still is represented in various ways and in different areas of the Andean man. This plurality of representations of the Chakana has been discovered by archaeologists in sacred places such as in Puerta del Sol near Lake Titicaca of the Tihuanacotas, at Cusco of the Incas, at Chavin and other places. To this day, it is kept in the decorations of typical clothes, in handmade objects and in sacred symbols.

The Andean Chakana is celebrated on 3 May, even though, with the coming of Christianity, the celebrations of the Exaltation of the Cross was imposed, both feasts have been intertwined. Even today, they are celebrated in different places and a visible example of this may be seen at the feast of Santa Veracruz in the city of Cochabamba, in Bolivia. According to ethno-psychologist Esther Balboa, before it was a colony, Santa Vera Cruz was the celebration of the Southern Cross, known as Chakana (bridge), and the spot was an astronomical site where the wise ones decided what the meteorological weather would be like. People would come from different places to hear the interpretations of the signs of the times to communicate them to their ayllus.

At present, the Tatala feast of Santa Vera Cruz Tatala celebrates the regeneration of the fertility of life, human, animal, food and other elements that sustain life. The feast expresses the joy of having had a good harvest and a good multiplication of the animals. This is the reason why the best fruits of the harvest are ritually presented to the God of life who is represented by Christ crucified. On 2 May, the festival begins and on that day the pilgrims arrive from the different communities. During the night, each family prepares its place for the lamparaku (lighting of the candles for the saint) where animal dung is burned, artisan animals are bought for the ch`allar (sprinkling with chicha) and the ackullt`ar (coca chewing), and their ashes are taken to the fields and scattered in the enclosures as a sign of strengthening and protection.

It is intended, by means of these ritual celebrations, to reinforce the fertility of the fields and of the animals so that they may multiply. The small farmers of the valleys and the Andes bring potatoes, corn cobs and other products on thanksgiving. The city people, instead, make their t`ipaku (giving silver to the saint or the one being celebrated). Everybody comes to give thanks for what they have received and to ask that the means of sustaining life may never be wanting.

It is also the time and space for restoring equilibrium, harmony between the three existential spaces. In a personal sense, people renew their commitment to live in harmony. This is why the Andean Chakana is the main principle of relating to everyone. For that matter, the Chakana is the cosmic bridge between the three communities: human society, nature and supernatural beings.

The Chakana enables people to relate to every one according to the principle of ayni (reciprocity), and so the Andean Chakana constitutes the principal element of territorial, social, economic and cosmopolitan order, so as the reach the sumaq kawsay (to live well) in the Andean world.