Oral Literature: The Tortoise, the Leopard and the Hyena 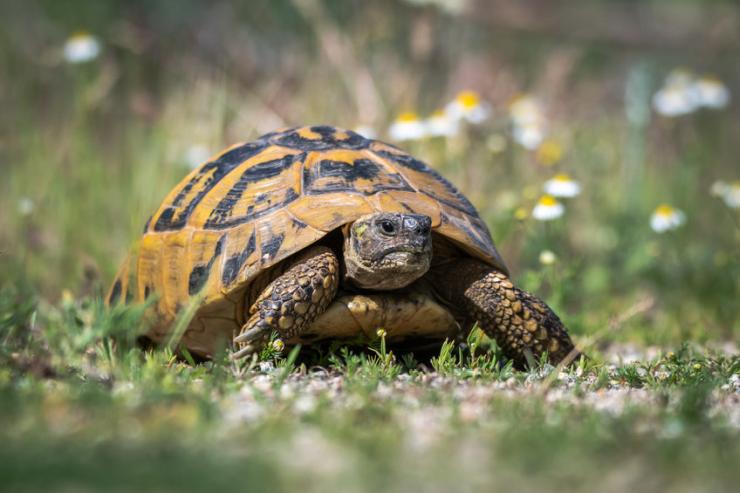 One morning, once upon a time, the tortoise had a very pleasant surprise when he came out of his hiding place under a rock. He found himself in the midst of a lot of delicious mushrooms. They had come out of the ground overnight. He started to eat them enjoyably.

It was not long before the hyena passed by. He saw the tortoise feasting on the mushrooms and enjoying himself thoroughly.

He became envious. He had gone for three days without anything to eat. He was very hungry. He could not stand the sight of the tortoise having so much to eat while he himself had nothing to eat and was so hungry.

“What are you doing, tortoise?” he asked angrily. “I am eating these mushrooms. They came up overnight. I am so blessed today. Come and have some,” the tortoise replied joyfully.

“How can you insult me by suggesting that I should eat mushrooms? Have you ever seen me eat that rubbish? Now there will be two of us starving!” the hyena said angrily. He picked up the tortoise in his hand from the ground. He looked at him menacingly. He had half a mind to dash him against a rock. The tortoise was very scared.

He knew that the hyena was up to no good. He appealed for mercy frantically. The hyena changed his mind. Instead, he climbed up a nearby tree with the tortoise in his hand. He perched up the tortoise precariously on a branch of the tree and left him there. The hyena then climbed down. He left the place and went away to look for his own food.

The tortoise was stranded up in a tree. He could not climb down the tree to the ground. He did not know how to climb up trees or down trees. He could easily tumble down on the rock and break his shell. He was afraid of injuring himself. After some time, the tortoise decided to call for help. He shouted for help. The leopard heard his calls for help and hurried over. He was very surprised when he saw the tortoise perched up dangerously so high in a tree. He could not help but fall into laughter.

“When did you start climbing up trees tortoise and what are you doing up there?” he asked. “I did not climb up here. It is the hyena who put me up here. He saw me eating the mushrooms on the ground and said he could not stand seeing me with so much to eat while he had nothing to eat. He said I should starve too,” the tortoise replied very sadly.

The leopard decided to help the tortoise immediately. He climbed up the tree quickly. He took the tortoise in his hand and climbed down gently with him.

“There you are! Enjoy yourself!” the leopard said as he started off. “Wait a minute, Mr. Leopard! You have been very kind to me,” the tortoise said as he hurried away into his hiding place.

He came out of the small cave with a big gourd and a whisk. He asked the leopard to look away as he dipped the whisk into the gourd. He then pulled out the whisk and splashed some liquid over the leopard.

“Thank you very much for your kind deed, Mr. Leopard. You can go away now. I will not tell you what I have done to you. It is for others to tell you,” the tortoise said.

The hyena was furious when he heard what the leopard said. He hurried away, back to where the tortoise was. He found the tortoise busy eating the mushrooms. He picked up the tortoise again in his hand.

“I was here before the leopard came. Yet you did not give me the beautiful spots you have given him. I am going to smash you against the rock now and kill you instantly, unless you give me beautiful spots too,” the hyena threatened the tortoise angrily.

“Alright! Alright!” the frightened tortoise said, “just put me down and I will do it for you too,” The tortoise was very scared of the cruelty of the hyena. The hyena smiled with immense satisfaction. His intimidation had worked.

“You had better hurry up about it. I want mine to be even better than those of the leopard,” he ordered the tortoise. “Yes, Sir!” the tortoise said as he hurried away into his hiding place under the rock.

Pretty soon he brought out the gourd and the whisk. He told the hyena to look away before he splashed him with a different liquid. “What I have done to you is not for me to say. Others will tell you,” the tortoise said as he hurried away into his hiding place under the rock.

The hyena hurried away to where the other animals were. He was expecting to be admired more than the leopard had been admired. Instead, they all laughed at him derisively. He had ugly spots.

The hyena ran away in shame. He headed back to where the tortoise was. He was very angry with the tortoise. This time he intended to smash the tortoise against the rock right away, if the tortoise did not reverse the ugly spots.

He arrived at the spot but the tortoise was nowhere to be seen. The tortoise had gone into his hiding place. “Tortoise! Tortoise! Come out, this instant! –  he commanded -, I told you to give me better spots than those of the leopard. Instead, you have made me ugly for everyone to laugh at me! You undo what you have done instantly before I smash you against the rock.”

From the security of his hiding place under the rock, where the hand of the hyena could not reach him, the tortoise laughed out loudly.

“Go away in shame you cruel animal! I have given you ugly spots to reflect your ugly heart and dark deeds,” he replied. That is how the leopard got his beautiful spots and that is how the hyena got his ugly spots.

PreviousMission Diary: Learning from the enthusiasm of the youth
NextThe Youth Corner: To live the gift of holiness