Oral Literature: The Hare, The Hyena, the Leopard and the Black Mamba 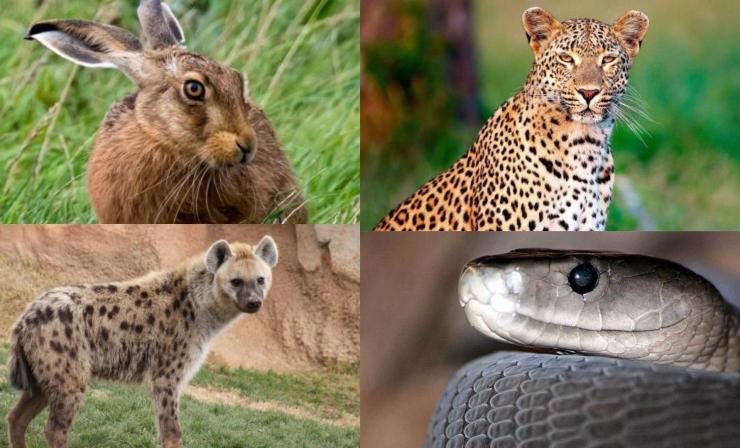 Once upon a time, the hare became a travelling businessman. He used to carry merchandise from his home-area for sale in faraway villages. There was great demand for his goods in those faraway villages.

He was doing very well. He was making much money. Many others wanted to learn from him and make much money as well. As usual, the hare set off one day. The hyena saw him pass by. The hyena begged the hare if he could join him. The hare allowed the hyena to join him.

As they walked on in the hot sun farther and farther away from home, they felt tired. They decided to rest under the shade of a large tree on the bank of a big river.

The leopard felt thirsty. He ordered the hyena to go and fetch some water quickly from the river, for all of them to drink. The hyena took great exception to that order. He refused. He said he was not a domestic servant of the leopard to be ordered about by him.

The leopard got angry. He did not take kindly to disobedience. He jumped on the hyena immediately. He broke the neck of the hyena and killed him instantly. Swollen with triumph, the leopard arrogantly claimed for himself ownership of the goods of the dead hyena.

The lion made a wry smile. He too felt thirsty. He ordered the leopard to go and fetch the water quickly from the river, for all of them to drink. The leopard took great exception to that order. He refused. He said he was not a domestic servant of the lion to be ordered about by him.

The lion got angry. He did not take kindly to disobedience. He jumped on the leopard immediately. He broke the neck of the leopard and killed him instantly. Swollen with triumph, the lion arrogantly claimed for himself ownership of the goods of the dead leopard and of the dead hyena.

The lion then made another wry smile. He turned around and looked at the black mamba. He ordered the black mamba to go and fetch the water quickly from the river, for all of them to drink.

The black mamba ducked away from the mortal blow just in time. The black mamba then swung back his reared head. With his sharp fangs, he gave the lion two quick jabs on the same leg that had nearly crashed him to death.

The lion felt paralyzed immediately. He started to gasp for air. He collapsed dead within minutes. Swollen with triumph, the black mamba arrogantly claimed for himself ownership of the goods of the dead lion, of the dead leopard and of the dead hyena. He made the claims as he gloated over the three, large, dead beasts whose bodies were getting bloated in the hot sun.

The hare was shaking with fear like a leaf in the wind. He was gripped with great fear for his own life. He knew there were now just the two of them left. He knew he was not a match for the black mamba. But he tried hard to put on a brave face on things.

He was still praising the black mamba when he picked up a large, empty, metal bucket which had a lid on it. “What is that for? Are you on your way to draw the water for me then?” curious, the black mamba asked the hare.

“No, Sir! We must do first things, first! This is for you, Sir. We must secure your life first. While I am away to draw the water the men who operate the canoes may see you and come to kill you. Get in here Sir, for your own safety! I do not want them to see you.

“Once they see you, there is no way they are going to feel comfortable. Most likely, they will pick up sticks to smash your head to death. Or they will throw stones at you from a safe distance. You know, the traditional enmity between men and snakes! You coil up yourself in here Sir and hide. I will put the lid on top. I will claim all these goods as mine while you are concealed in this bucket. They will not guess you are in here,” the hare said, very convincingly.

The hare gave out a sigh of great relief as he sat down in the shade under the tree. He had a big smile on his face. He was the perfect picture of contentment. He could now rest. But most importantly, he was no longer in fear of his life. The danger to his life was getting eliminated.

The black mamba realized very late about what the hare was up to. He was frustrated and helpless. He was angry and bitter with the hare. But there was nothing he could do to the hare, other than release a volley of swear-words at him.

The black mamba kept on swearing at the hare. He tried very hard to push the lid off the bucket. He failed. The rock on the lid was too heavy for him.

PreviousAfrica: Markets in the City
NextThe Youth Corner: A “Yes” full of “yeses”