Oral Literature: The Crocodile in the River 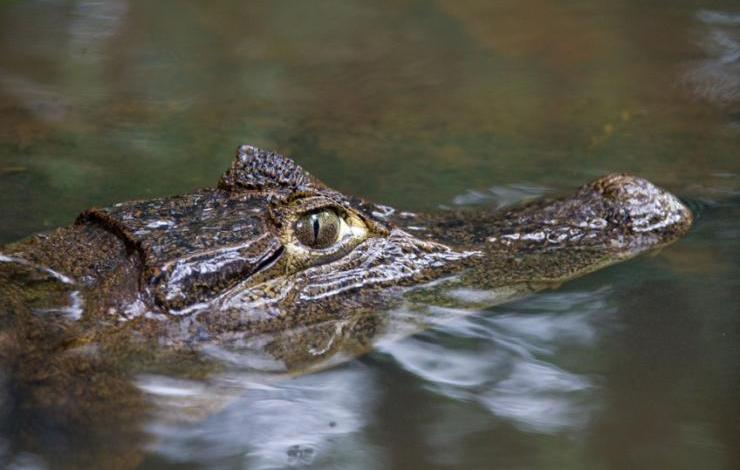 At a place on the western coast of Africa, some distance south of the bulge, Crocodile lay basking on a bank in the winter sun, close to a river that was the same colour as his skin. Suddenly, the peace was disturbed by a raucous yell from Jackal, who was out to trick Hyena.

“Duiker, Kudu, Steenbuck!” said Jackal as he called out the names of animals that lived near the water. When Hyena heard Jackal’s call, he became curious and trotted towards Jackal.

“I see that you are only calling the animals that have hooves! Why are you not calling those of us with pads on our feet?” Cunning Jackal said, “It did cross my mind, Hyena. But I’ve been told that you are angry with me. I believe that you are out to get me.”

Hyena kept his distance as a slight wind ruffled his tan-and-black spotted coat and the mane that moved slightly down from his shoulders. Then Jackal said, “Hyena. I have found a skin that is very dry and I need to get it to the river to soak, only then will I be able to eat it.”

Hyena replied, “Does that mean that you want me to take it to the river for you? I will soak it for you.” “I would be so glad if you did that for me, Hyena. Then when you have brought it back, we can eat it.”
Strong Spotted Hyena then lifted the Crocodile, straining as he hoisted it off the ground. As he was lifting the heavy weight, Crocodile sneaked a glance at Hyena. Hyena took fright and said, “Jackal, is that an eye or just fat?” Black-backed Jackal reassured Hyena. “No, it’s just fat. Don’t worry.”

When Hyena reached the banks of the sludge-coloured river, dragging his heavy weight, he said, “Jackal, is this alright?” “No, Hyena. You need to go in deeper.”

Hyena went a little deeper into the cool brown water and again asked Jackal, “Is this deep enough?” “Yes,” replied Jackal, his soft, browny-red coat catching the breeze that swirled above the river.

Hyena lowered Crocodile into the water and as he did so, Crocodile grabbed his front leg, threatening to drag him beneath the surface of the water. Hyena shouted at both Jackal and Crocodile, calling them names.

Then using all his strength, Hyena managed to escape the clutches of Crocodile and climb out of the water. When he reached the land, he immediately went in search of Jackal who was already far away. To this day, Hyena is still searching for Jackal as he desires an explanation for his treacherous behaviour.