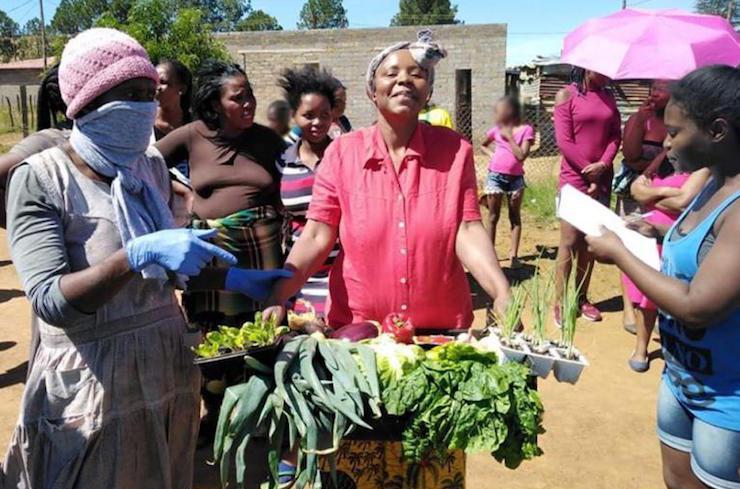 The food crisis, exacerbated by the COVID-19 pandemic has opened up new ways toward sustainability and self-reliance through vegetable gardens in the less-privileged communities of Johannesburg.

In February 2020, Seed Community’s Green Business College (GBC) in partnership with Tim Nectare Farms launched the Ubuntu Project (www.ubuntuproject. africa) aimed at providing fresh food boxes and setting up food gardens amongst the most vulnerable in the Gauteng communities in South Africa.

Ubuntu means ‘I am because you are’. It can also mean ‘We are because the earth is.’ It speaks of our shared humanity and our place on this earth.

Food security is a growing challenge in South Africa and in many parts of Africa and food gardens are a real solution, which contributes to mitigating the effects of climate change that will continue to pose a threat during the post-COVID-19 era. They provide a way for communities to produce their own fresh vegetables and generate some extra income. As households collect and replant their seeds, the extra seedlings and excess produce can be sold.

This initiative came as a result of the unprecedented global crisis of the pandemic which saw a lot of families starving, while small-scale producers were stuck with their produce, unable to sell it in the markets.

Working together with local agroecology farmers in the greater Johannesburg, the initiative provided boxes of fresh vegetables and managed to establish food gardens among the more disadvantaged in the communities. It did not only provide the communities with organic produce, feeding needy families but offered them tools to grow their own vegetables.

The initiative started with organic farmers in the Orange Farm area. Ubuntu Project supported these farmers as they supplied needy families with food parcels of organic vegetables, seeds, seedlings, compost and, more importantly, training and support – a special component usually lacking in a lot of small gardening projects where beneficiaries are given seeds and then abandoned to continue on their own.

The veggie boxes displayed the true spirit of Ubuntu, which is about empathy, community, and recognising that none can survive without the most vulnerable. This became such an attractive initiative on social media that it received a lot of attention from people in affluent areas of Johannesburg. They started purchasing the veggie boxes for their own consumption.

In June 2020, the Ubuntu Veggie Box delivery service was launched. People had the opportunity to order boxes, which were delivered to them. Every box purchased enabled the customer to donate a vegetable garden starter kit – comprised of 30 seedlings and 10 kg of compost – to resource-constraints communities who were keen to grow their own veggies. Customers were also connected to the beneficiary families.

Through the Ubuntu Project, Betty Nkoana and the members of the Thoughtful Path (TP) Non-Profit Community organization, received various forms of support. These included seedlings and seeds for their community allotment gardens in the old township of Munsieville, West Rand, Johannesburg.

Betty is a real champion in the community, as together with the TP members, provides a range of services, which include aftercare for orphans and underprivileged children, and health care services for teenagers and women.

Betty, through training that she and her colleagues received from the GBC in 2018, developed a passion and love for farming. In 2019, she and other members of TP were offered a piece of land next to an informal settlement in Johannesburg’s oldest township.

They were able to set up farming allotments for various families and community groups. The Ubuntu Project donated the seedlings and seeds for the allotments and Tim Abba, who was a trainer at the GBC, spent two days providing Betty and her team with technical support to set up the gardens.

In August 2020, Betty, 20 members of TP and some of the young people and women from Munsieville Township attended the Ubuntu Project Agri-business course facilitated by the Ubuntu Project. They learned about product pricing, marketing and value-addition and how to turn their small farming project into a profitable business.

They started to farm with determination in September 2020 on their small plot and they implemented what they had learned from both the organic farming training and the business course to set up their agri-business. They also received a second instalment of the donated Ubuntu Project seedlings to augment the production capacity of the plot.

The TP team have been harvesting pumpkins, mealies, spinach, chillies, tomatoes, onions, rosemary, mint and lettuce and has been supplying Ubuntu Veggie Boxes. This team started processing some of their produce to make their unique Chilli-Sauce which they are selling in their community. All of their produce was sold and they were able to buy another set of seedlings and seeds to replant. This has been a truly transformational story of how to create resilient communities which secure their livelihoods.

This project contributed to assisting communities of urban Johannesburg South through emergency food parcels relief. The contents of the parcels of fresh and locally processed products were made to be flexible, based on the needs and resources of each area and linked to small-scale farmers.

Local small-scale farmers in Johannesburg South collaborated and formed partnerships to supply the needed volumes and a variety of fresh nutritious vegetables, which offered flexibility in the procurement of the goods. The small-scale farmer partnership has the potential for expansion, to supply other food relief efforts and services to local markets.

During the COVID-19 food relief effort, the Ubuntu Project managed to inspire small and local distribution networks including small logistics enterprises in and around Orange Farm. These can flexibly procure from their network of small-scale farmers, fresh produce, dry goods assembled into agreed packages, and deliver food relief parcels should they be needed.

Setting up 150 households and 11 communal food gardens in the communities with supplies of compost and seedlings has been very important to enable households to plant their small food gardens and for small-scale farmers to continue producing. This has been an essential contribution to the community and to the household’s resilience in these trying times. Some of these are small homesteads, and backyard gardens, others are farmers producing in bigger areas. Over five months – May to September 2020 – the Ubuntu Project assessed the input needs and delivered tailored input packages as required. These have the potential to scale up depending on further needs assessments.

This emergency food relief response has shown its potential to catalyse a more enduring production and distribution network, coordinated with the demand, to produce more localised food economies.  Food sovereignty means much more than putting food on the table. It touches the core of human dignity and enables people to become producers within their own communities.