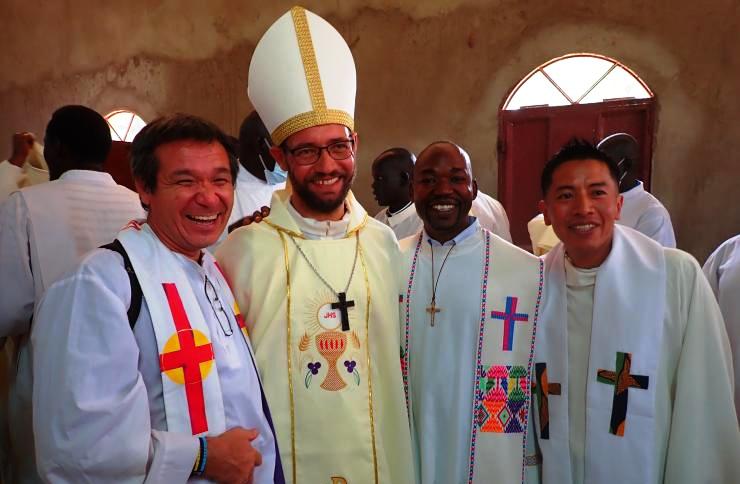 Almost a year after the dramatic attack in which he suffered serious injuries, Bishop Christian Carlassare returns to Rumbek, South Sudan, where he was ordained bishop on March 25.

In a beautiful and moving ceremony that lasted more than four hours, Father Christian was ordained bishop in Rumbek by the Cardinal Emeritus of Khartoum, Gabriel Zubeir Wako. The rite began with the invocation of the Holy Spirit. A precious book of the Gospels was placed on Fr. Carlassare’s head. After being anointed with oil, he received a bishop’s insignia: the mitre, ring and crozier. It was a joyful feast with more than 10,000 people from the communities and guests participating in the events.

Addressing Mons. Carlassare, Cardinal Zubeir Wako underscored the need for servant leadership saying, “You are going to be nothing but the servant of everybody. You are called to serve, to help, to guide the people, to be behind them … “

At the end of the celebration, Bishop Carlassare appealed for reconciliation and peace. He asked people to repeat five times “We are all one in Christ”, the motto and purpose of his episcopate: to unite all in Christ, as St. Paul says, “all of you are one in Christ Jesus” (Gal 3:28). He concluded by saying they should not look for him so much in the cathedral as in their communities, including the “cattle camps”, where he will visit them.

For the occasion, the General Administration of the Comboni Missionaries, to which Bishop Carlassare belongs, sent a message: “We have always been close to you, and we assure you that we will continue walking with you in this new service the Lord has entrusted to you…The Church in South Sudan has been built by the remarkable example of so many lay people, catechists, religious, priests and bishops who tirelessly proclaimed the Gospel of life with their commitment and self-donation. The Holy Spirit, the protagonist of the mission, has been active through the lives of Saint Josefine Bakhita, Fr. Daniel Sorur, Sr. Fortunata Quascé, Bro. Giosué Dei Cas, Saint Daniel Comboni among many others. In times of trial and difficulty, they excelled in the practice of faith, hope and love for the sake of the Gospel.”

Bishop Carlassare had been serving in South Sudan’s Malakal Diocese since his arrival in the country in 2005, the year of the Comprehensive Peace Agreement (CPA) between the southern regions and the government in Khartoum which paved the way for independence in 2011.

For 10 years, he lived among the Nuer in Holy Trinity Parish, Fangak County, Malakal Diocese. He worked as a parish priest and as a formator in the Comboni province. In 2020, he was appointed Vicar General of the Diocese of Malakal. He was appointed Bishop on 8 March 2021.

Bishop Carlassare travelled to Rumbek Diocese on 15 April. In the early hours of 26 April 2021, he was attacked and shot in both legs. He was airlifted to Nairobi for specialized treatment.  After receiving treatment in Kenya and his native country of Italy, he returned to South Sudan on March 18 and arrived in Rumbek on March 23 ahead of his Episcopal Ordination on March 25.

The 44-year-old Bishop who had a private meeting with Pope Francis on March 14 has “Omnes Unum in Christo (You are all one in Christ Jesus)” as his Episcopal Motto.

The Diocese of Rumbek (DOR) is one of the seven Catholic dioceses existing in South Sudan. Located in the heart of South Sudan, it covers the entire Lake Region and the southern part of the Warrap Region – an area of approximately 65,000 square kilometres with approximately 5 million inhabitants. The diocese includes 11 main missions: Rumbek, Marial Lou, Warrap, Tonj, Agangrial, Wulu, Mapuordit, Yirol, Bunagok-Aliap, Cueibet and Barghel.

Established as an apostolic vicariate in 1955, it was elevated to the status of a diocese in 1974. Comboni Bishop Cesare Mazzolari led the diocese from 1999 until 2011. Fr. Fernando Colombo, also a Comboni missionary, was administrator of the diocese until December 2013, when the Prefect of the Congregation for the Evangelization of Peoples appointed Fr. John Mathiang as Diocesan Coordinator. Bishop Carlassare is the only foreign bishop and currently the second Comboni bishop in South Sudan, together with Bishop Matthew Remijo in Wau Diocese.