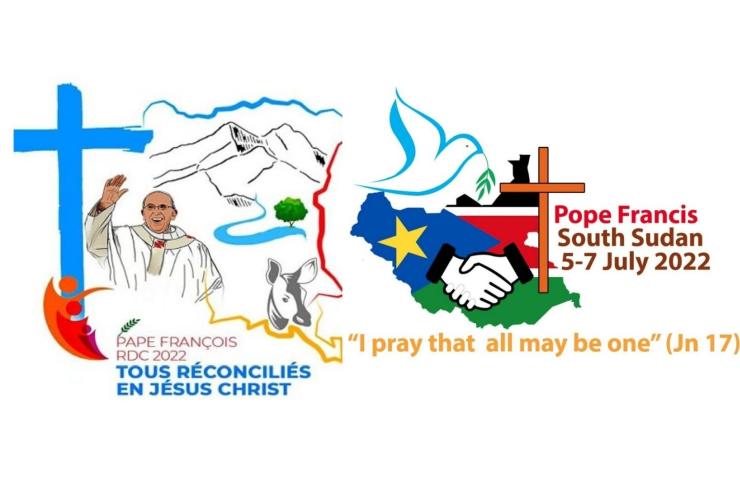 He is expected to travel between July 2 and 5 to the Democratic Republic of Congo where he will visit Kinshasa and Goma and from 5 to 7 July to South Sudan in the capital of Juba.

The motto for Pope Francis’ Apostolic Journey to the Democratic Republic of Congo (DRC) is “All Reconciled in Jesus Christ.” An icon of the logo showing the colour yellow on the flag depicts a DRC rich in terrestrial and subterranean flora and fauna while a band of red along the eastern border of the map depicts the blood shed by martyrs predominantly from that region.

The blue borderline on the north side symbolizes the fervent desire for peace in that region while a blue cross on the left side of the icon stands for, “The devotion of the Congolese people to the Virgin Mary, the Madonna of Congo, who carries and supports the prayers of the whole nation to Christ the Redeemer.”

Inside the logo is a range of biodiversity including mountains, present in most regions of the country, particularly the eastern region where recently, Mt Nyiragongo – an active volcano – erupted subsequently affecting people in Goma.

The flowing water symbolizes the hydrographic wealth of the country including the River Congo as well as all other lakes, water features and bodies.

A tree at the centre of the logo mirrors, “All of the flora of the Congo and represents the uniqueness of this land, Africa, and the planet. Also depicted are the okapi, half zebra, and half giraffe, an animal symbolizing the DRC, the only country where it is found, living in the wild and representing the richness of the Congolese fauna,” the local organizing committee revealed.

A palm branch shows the martyrdom rooted in the country’s history “Victory, rebirth, and immortality, and the message of hope that the Pope’s visit offers.”

The three persons at the foot of the cross are symbolic of fraternity amongst men, women and children; the desire for unity amongst all and a gift from God. The logo also consists of an image of Pope Francis offering blessings presumably for the country, to the joy of much of its population.

The choice of bright colours was, according to the local organizing committee, “to give testimony to the feeling and dynamism that characterizes the Congolese people, ready to welcome in joy and unity the Vicar of Christ and Successor of Peter.”

“The Holy Father will have an open Gospel before his eyes. We survived Covid and the war with its corollaries. From Ituri to Beni, Goma, Bukavu and Uvira, the population aspires to peace, to true social cohesion. Our diversity is a possibility for growth, and those who manipulate us to better divide us and plunder our natural resources are cowards and must learn from this pilgrim, a friend of the existential peripheries, with his simplicity and his smile that welcomes and reconciles”, said Fr. Justin Nkunzi, Director of the Diocesan Commission “Justice and Peace” of Bukavu.

Pope Francis will go to South Sudan, where he will visit the city of Juba from 5 to 7 July. The motto of the Apostolic Journey to South Sudan is “I pray that all may be one”. The motto is taken from a chapter generally known as the Farewell Prayer or the High Priestly Prayer of Jesus in the Gospel of John chapter 17.

The logo contains a dove, the outline of the map of South Sudan with the colours of the flag, the cross, and two clasping hands in a firm handshake.

The dove is placed above the map’s contours, carrying an olive branch to represent the desire for peace.

In the centre of the map are two clasped hands representing the reconciliation of the various ethnic tribes that make up one nation. On the right is the cross representing the country’s Christian heritage and its history of suffering. Next to the cross is the inscription “Pope Francis in South Sudan” and the date of the Apostolic Journey.

Bishop Yunnan Tombe Trille of the Catholic Diocese of El Obeid in Sudan and president of the Sudan-South Sudan Catholic Bishops’ Conference explains that the dove over the map of South Sudan indicates the desire of the Pope for peace to prevail in Africa’s youngest country. He says the symbol of the handshake below the map represents the reconciliation of the people of South Sudan.

Archbishop Stephen Ameyu Martin Mulla, Ordinary of the Archdiocese of Juba said: “As a nation and Church, we feel honoured and exultant by the visit of His Holiness Pope Francis to South Sudan. It will be a great moment for all South Sudanese to rally around peace and reconciliation, and we hope the Holy Father will encourage all of us to move along the path of dialogue, peace and justice for the consolidation of peace in the country”.

“We are waiting for the visit of Pope Francis to South Sudan. This is a positive moment for the country and the Pope’s visit is definitely linked to peace,” says Sr. Elena Balatti, a Comboni Missionary Sister in the province of South Sudan. “Unfortunately, however, the war in Ukraine is keeping the whole world in suspense, and although in South Sudan there is much joy and many positive expectations for this visit, the spectre of war in another part of the world that can potentially have negative effects on other continents, including Africa, takes away some of our joy”.

The Apostolic Nuncio to the country Archbishop Bert van Megen has described the Holy Father’s gesture as a means by which he proposes to bridge the reconciliation gap that has existed in the country for years. “Pope Francis is very serious about reconciliation for justice to prevail, and I think he intends to be that bridge between the opposing parties in South Sudan to bring people together,” He points out that since the beginning of his Pontificate in 2013, the Pope has always desired to visit South Sudan.

Recounting that in 2019 Pope Francis organized a retreat in Rome for the South Sudan leaders and eventually kissed their (Leaders) feet as a humble gesture pleading with them not to return to civil war, the Apostolic Nuncio noted that “the very symbolic gesture has had very little effect till now.” In a sense”, he said, “The Papal visit is a follow-up to that same event of 2019 to show the people on the ground the need for reconciliation.” South Sudan can be termed a country on the periphery and Pope Francis wants to be one with them and understand the reality of the people: “To get the real sense of things and to better understand them, one needs to be physically present to look the people in the eye, and to hear their stories,” the Nuncio said.

Besides Pope Francis, the Archbishop of Canterbury Justin Welby and the Moderator of the Scotland Presbyterian Church will also be present during the visit to South Sudan.

PreviousSouth Sudan: A Comboni Missionary, a new Bishop
NextBolivia: May Easter cause peace to Flower