Oral Literature: The Hare, the Rat and the Lion 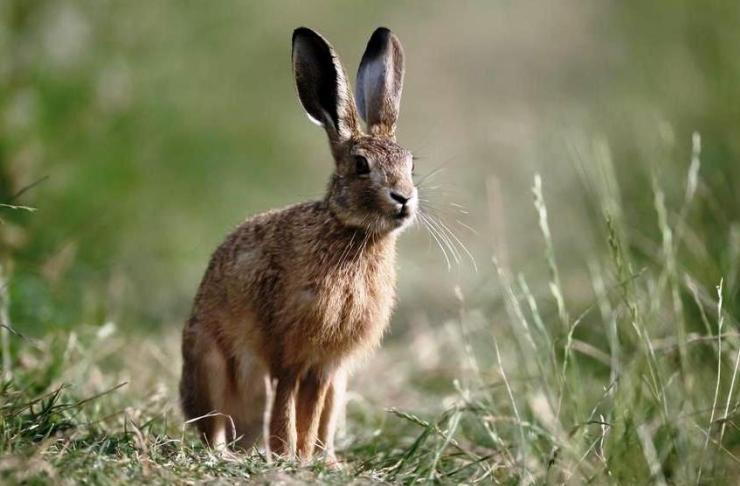 One day, the hare, roaming through the forest in search of food, glanced up through the boughs of a very large calabash tree, and saw that a great hole in the upper part of the trunk was inhabited by bees; thereupon he returned to town in search of someone to go with him and help to get the honey.

As he was passing the house of the big rat, that worthy gentleman invited him in. So, he went in, sat down, and remarked: “My father has died, and has left me a hive of honey. I would like you to come and help me to eat it.”

Of course, the big rat jumped at the offer, and he and the hare started off immediately. When they arrived at the great calabash tree, the hare pointed out the bees’ nest and said, “Go on; climb up.” So, taking some straw with them, they climbed up to the nest, lit the straw, smoked out the bees, put out the fire, and set to work eating the honey.

In the midst of the feast, who should appear at the foot of the tree but, the lion? Looking up, and seeing them eating, he asked, “Who are you?” Then the hare whispered to the big rat, “Hold your tongue; that old fellow is crazy.” But in a very little while the lion roared out angrily: “Who are you, I say? Speak, I tell you!” This made the big rat so scared that he blurted out, “It’s only us!”

Upon this, the hare said to him: “You just wrap me up in this straw, call to the lion to keep out of the way, and then throw me down. Then you’ll see what will happen.”

After waiting a minute or two, the lion roared out, “Well, come down, I say!” and, there being no help for it, the big rat came down. As soon as he was within reach, the lion caught hold of him, and asked, “Who was up there with you?”

“Why the hare. – Said the big rat -, Didn’t you see him when I threw him down?” “Of course, I didn’t see him,” replied the lion, in an incredulous tone, and, without wasting further time, he ate the big rat, and then searched around for the hare, but could not find him.

Three days later, the hare called on his acquaintance, the tortoise, and said to him, “Let us go and eat some honey.” “Whose honey?” inquired the tortoise, cautiously. “My father’s,” the hare replied. “Oh, all right; I’m with you,” said the tortoise, eagerly; and away they went.

When they arrived at the great calabash tree they climbed up with their straw, smoked out the bees, sat down, and began to eat. Just then the lion, who owned the honey, came out again, and, looking up, inquired, “Who are you, up there?”

The hare whispered to the tortoise, “Keep quiet;” but when the lion repeated his question angrily, the tortoise became suspicious, and said: “I will speak. You told me this honey was yours; am I right in suspecting that it belongs to the lion?”

So, when the lion asked again, “Who are you?” he answered, “It’s only us.” The lion said, “Come down, then;” and the tortoise answered, “We’re coming.” Now, the lion had been keeping an eye open for the hare since the day he caught, the big rat, and, suspecting that he was up there with the tortoise, he said to himself, “I’ve got him this time, sure.”

Seeing that they were caught again, the hare said to the tortoise: “Wrap me up in the straw, tell the lion to stand out of the way, and then throw me down. I’ll wait for you below. He can’t hurt you; you know.”

“All right,” said the tortoise; but while he was wrapping the hare up, he said to himself: “This fellow wants to run away, and leave me to bear the lion’s anger. He shall get caught first.” Therefore, when he had bundled him up, he called out, “The hare is coming!” and threw him down.

So, the lion caught the hare, and, holding him with his paw, said, “Now, what shall I do with you?” The hare replied, “It’s of no use for you to try to eat me; I’m awfully tough.” “What would be the best thing to do with you, then?” asked Simba.

“I think – said the hare -, you should take me by the tail, whirl me around, and knock me against the ground. Then you may be able to eat me.”

So, the lion, being deceived, took him by the tail and whirled him around, but just as he was going to knock him to the ground he slipped out of his grasp and ran away, and the lion had the mortification of losing him again.

Angry and disappointed, he turned to the tree and called to the tortoise, “You come down, too.” When the tortoise reached the ground, the lion said, “You’re pretty hard; what can I do to make you eatable?”

“Oh, that’s easy,” laughed the tortoise; “just put me in the mud and rub my back with your paw until my shell comes off.”

Immediately on hearing this, the lion carried the tortoise to the water, placed him in the mud, and began, as he supposed, to rub his back; but the tortoise had slipped away, and the lion continued rubbing on a piece of rock until his paws were raw. When he glanced down at them, he saw they were bleeding, and, realizing that he had again been outwitted, he said, “Well, the hare has done me today, but I’ll go hunting now until I find him.”

So, the lion, set out immediately in search of the hare, and as he went along he inquired of everyone he met, “Where is the house of the hare?” But each person he asked answered, “I do not know.” For the hare had said to his wife, “Let us remove from this house.” Therefore, the folks in that neighbourhood had no knowledge of his whereabouts. The lion, however, went along, continuing his inquiries, until presently one answered, “That is his house on the top of the mountain.”

Without loss of time, the lion climbed the mountain and soon arrived at the place indicated, only to find that there was no one at home. This, however, did not trouble him; on the contrary, saying to himself, “I’ll hide myself inside, and when the hare and his wife come home, I’ll eat them both,” he entered the house and lay down, awaiting their arrival.

Pretty soon along came the hare with his wife, not thinking of any danger; but he very soon discovered the marks of the lion’s paws on the steep path. Stopping at once, he said to his wife: “You go back, my dear. The lion has passed this way, and I think he must be looking for me.”

But she replied, “I will not go back; I will follow you, my husband.” Although greatly pleased at this proof of his wife’s affection, the hare said firmly: “No, no; you have friends to go to. Go back.”

So, he persuaded her, and she went back; but he kept on, following the footmarks, and saw – as he had suspected – that they went into his house.

“Ah!” said he to himself, “The Lion is inside, is he?” Then, cautiously going back a little way, he called out: “How d’ye do, house? How d’ye do?” Waiting a moment, he remarked loudly: “Well, this is very strange! Every day, as I pass this place, I say, ‘How d’ye do, house?’ and the house always answers, ‘How d’ye do?’ There must be someone inside today.”

When the lion heard this, he called out, “How d’ye do?” Then the hare burst out laughing, and shouted: “Oho, Lion! You’re inside, and I’ll bet you want to eat me, but first tell me where you ever heard of a house talking!”

Upon this the lion, seeing how he had been fooled, replied angrily, “You wait until I get hold of you; that’s all.” “Oh, I think you’ll have to do the waiting,” cried the hare; and then he ran away, the lion following.

But it was of no use. The hare completely tired out the old lion, who, saying, “That rascal has beaten me; I don’t want to have anything more to do with him,” returned to his home under the great calabash tree.

PreviousSahara: A Journey to Tadmekka – Sons of the clouds
NextThe Youth Corner: We Are a Mission