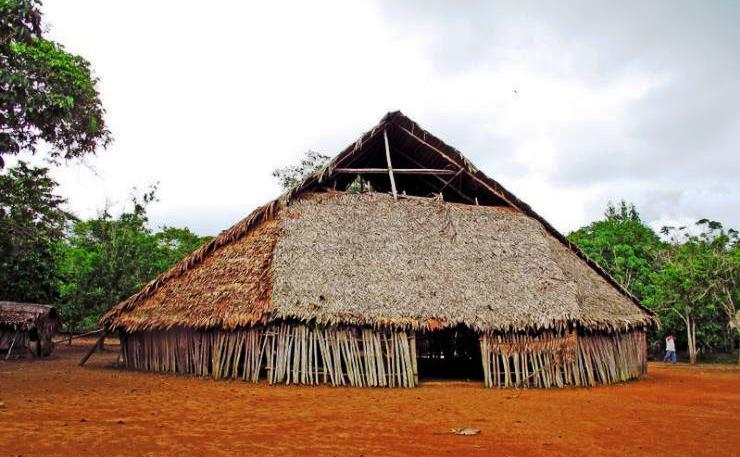 Maloca means communal house, it represents the unity of the Asheninka community, an indigenous people living in the central forest of the Ucayali department in the Atalaya province of eastern Peru.

The maloca is a large communal house inhabited by the indigenous of the Amazon. It is a traditional social unit which has cosmogonic and symbolic meaning. The maloca, in fact, represents the synthesis of the universe, it is a divine archetype, the womb of the mother earth, the house of the sun and moon and the receptacle of the celestial ray. That is why the person who manages the construction of a maloca must have knowledge of the symbolic meaning of this structure.

The structure and design of the maloca varies depending on the community, except for the four central beams which are the fundamental element of this large house. The methods of construction of the maloca have an origin in the legends and myths narrated within the communities, because according to the indigenous populations of the Amazon region, it was the gods who transmitted this knowledge to the first inhabitants of the Amazon.

The maloca is built in a place with fertile land and water where it is possible to cultivate cassava, rice, banana trees, corn, beans, and other products necessary for the livelihood of the community.

Once the place for the structure is found, the ground is cleared of climbing plants and weeds and the men in charge of the construction gather all the necessary materials for the construction of the maloca: pitchforks, slats, beams, ropes, palm leaves and other elements. In the highest part of the maloca is a space formed by four central beams, an area that represents the world of knowledge.

This is the central area, representing the centre of the universe and a space reserved for male reflection. The second space joins the two smaller beams or pillars and is considered the world of music. The space between the smaller beams and the outer edge represents the world of the vultures. There is also an area reserved for rituals and dances and, although it is also intended for everyday activities of men and women, it is a male space. Between the lower beams and the outer edge, there is a space reserved for the male-female transition represented in alliances, that is, in the marriage of men with women of other malocas, of other ethnic groups.

Malocas are also a tool for measuring time; there is a profound relationship between time, space, everyday activities, and the cosmos according to the Asheninka. On the ‘dome’ of the maloca are located two triangular openings: one facing the east and the other facing the west. Its function is a solar clock.

Each morning, the sun illuminates half of the upper part of the maloca and as it dawns, the sun’s rays descend and illuminate the bank of the owner, as well as the four main beams. When the sun reaches its highest, at midday, between the worlds of music and knowledge, the maloca darkens. But as soon as the afternoon begins to fall the light reappears illuminating the eastern side.

On the outside, around the maloca, are located the chagras (fields for cultivation) managed mainly by women, and then extends the jungle, which remains under the protection of the various spiritual guardians. These constructions also work as a solar calendar, guiding communities on the ideal times of each year to perform certain activities such as cultivation or rituals.

Thus, and due to the movements of our planet, the sun changes its angle with reference to the equator 23.5 degrees to the north in the month of June, and 23.5 degrees to the south in December. In March and September, the sun sets over the equator and this is the equinox time and the sun moves from the owner’s seat in the west and crosses the centre of the maloca to the entrance on the eastern side.

The interior of the structure is divided into two distinct areas, a masculine half and a feminine half, each area has its own exit; by going out through the door of the feminine and domestic part, one can reach the cultivated fields and the source of water.

In the feminine part of the maloca there is a place for kitchen utensils, baskets, sieves, pots, firewood and the stove where women cook cassava, the casabe, a crispy flatbread made from cassava (yuca) flour and other foods. The door of the masculine area of the maloca faces the road from which visitors arrive and which takes to the river. The elements that cannot lack in the area for men, are a pestle for tobacco, a ceremonial drum, and work tools. The central part of a maloca, also called the ‘chest of the tiger’, is considered a sacred place. It is there where the sheripiari (healer) sits during rituals and communicates with the spirits of the ancestors. The masculine part of a maloca is therefore also the place for ritual dances during which men wear masks to recall historical events.

It takes between two to three months to build a maloca, depending on the size. When the work is finished the community celebrates by participating in sporting competitions, dancing, drinking masato (fermented yucca drink) and eating meat or river fish. The maloca, or the Asheninka communal house, is thus inaugurated.