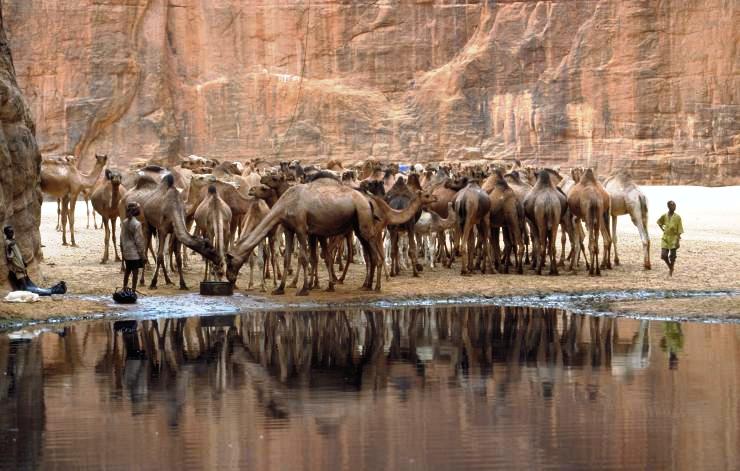 The next morning, Ali set out on foot and walked until he found someone who would employ him for a short time. From that job he went to find another and then another, and so on until he had visited many strange lands. Of the money that he earned, he spent one-third on food and saved the other two-thirds. At last, his thrift was rewarded and he was able to buy three camels with his savings.

They told each other where they came from and then the traveller said, “If you give me a present, I shall tell you something of value.” Ali gave the traveller one of the three camels.

“Do not go across any river which you do not know -, said the traveller -. Wait until someone else goes first.”

The man thanked the traveller, saying he was grateful for the advice. After going a short way, Ali met another traveller. They also greeted each other, and then the second traveller said, “If you give me a present, I shall tell you something of value.” Ali gave the traveller one of the two remaining camels.

“Do not rest – the traveller warned – under a tree which has a big hole in it.” Ali thanked him, saying he was grateful for the advice. When Ali continued his journey, he met a young boy. After they had greeted each other, the young boy said, “If you give me a present, I shall tell you something of value.” So, Ali gave the young boy his last camel.

“Be patient – said the boy -. Do not show your first feelings of anger.” Ali thanked him, saying he was grateful for the advice. They parted and Ali, with no more camels, went on his way. He had not gone far before he met two camel drivers with thirty camels.

“Please help us with our camels – the camel drivers asked Ali – so that each of us will have ten camels to lead.” Ali agreed and the three of them set off together with the camels. They came to a river which had flooded the fields on each side of its banks.

The first camel driver took off his clothes and entered the water to look for the crossing. He fell into a deep part of the river and was riot seen again. So, the second camel driver and Ali did not cross there, but went on and found a safe crossing.

On the other side of the river, they came to a forest. By that time the sun was setting and the men were tired. They looked for suitable trees to shelter them for the night. The camel driver took his sleeping mat and put it under a tree with a big hole in it.

But Ali remembered the advice he had received and he moved away from that tree. In the middle of the night, a large snake came out of the hole in the tree and killed the sleeping camel driver.

So, Ali collected the thirty camels and went back to his own part of the country, to his home and to his wife. She was overjoyed to see him. “You have not only seen much of the world – said his wife – but you have returned safely.” “Yes – Ali replied – and my good fortune in camels will bring us riches for the rest of our lives.”

PreviousPeru: The Asheninka. Mijado, the Time for Sharing
NextThe Youth Corner: Vocation Is Not Indifferent To Reality