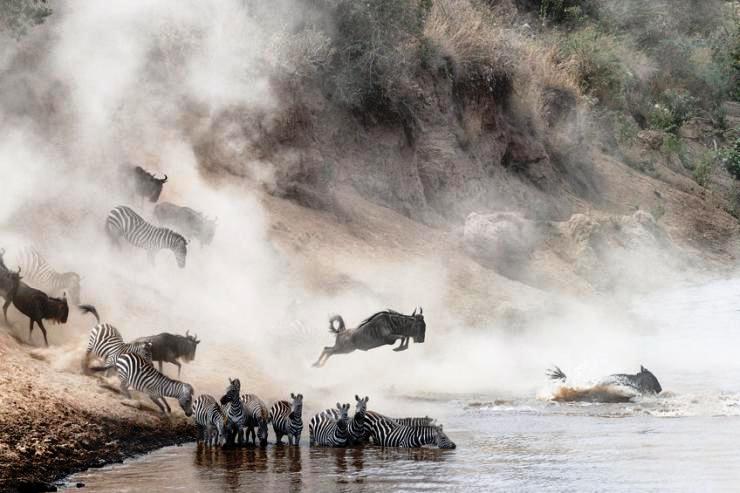 It was dawn and the first birds signalled the transition from night to day. Their calls were carried by a brisk wind that whipped the leaves of the acacias, and skimmed the surfaces of the pools that had formed after the heavy rain.

Zebra and his herd emerged from the shadows and trotted towards the watering hole. Soon Zebra, Wildebeest, a couple of giraffes and a herd of impala drank beneath pink-tinged clouds that dominated the eastern horizon.

Zebra hesitated before lowering his snout into the water. Something he had seen distracted him. “We need to dispose of Crocodile – said Zebra -. He is taking too many of our kind.”

Giraffe seemed not to hear Zebra’s urgent plea as she drank the cool muddy water with her long forelegs splayed in front of her. To her side stood another giraffe on guard, his long, patterned neck reaching upwards towards the cloudy sky.

“If we drink all the water from this large pool until there is little left, Crocodile will emerge and we’ll be able to catch him. Then we’ll put an end to his devastating activities,” said Wildebeest. “That’s a good idea,” said Zebra, drinking copious quantities of the water in large gulps.

The weak sun travelled its course in a windswept sky while Wildebeest and Zebra began lowering the level of the pool. Eventually when the pool was almost empty. Crocodile became uneasy. He quickly climbed out of the murky shallows and headed for a nearby river.

Wildebeest and Zebra trailed him. When they caught up with him, they began to attack him. In those days his skin was soft all over and was vulnerable to their kicks and bites. Soon large lumps of thick skin began to emerge on the dorsal side of his body where he had been attacked, but it was to his advantage as they turned into thick plates as a means of defence.

At last, Crocodile managed to forge a muddy path into the river and he escaped, relieved to be out of the clutches of Zebra and Wildebeest with their kicking hooves and bites.

From that day on, so long ago, a kinship was formed between Wildebeest and Zebra who are often found grazing in the same vicinity, not far from one another. But they are still wary of Crocodile when they drink at a pool because he is always looking for revenge.