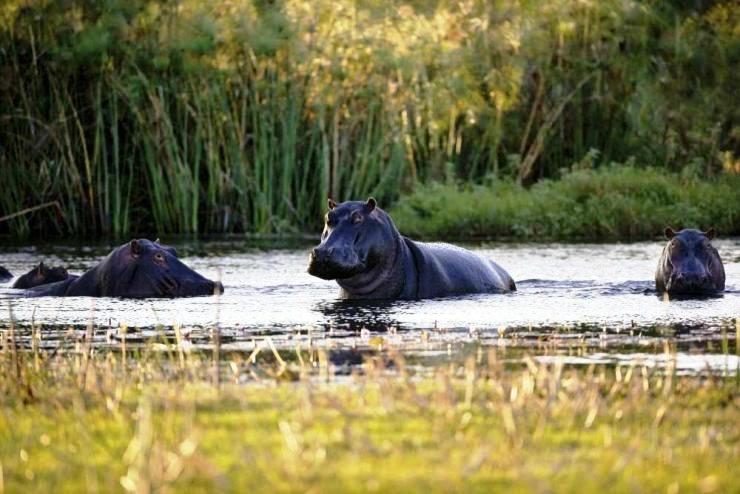 In days of old when animals roamed more freely across the African continent, Elephant, Hippopotamus and Hare chose to live on an island.

Elephant was an old bull who lived alone in the woodland area on the west side of the island, where grass, bushes and trees were plentiful. Hippopotamus preferred to live on the east side of the island in the wetlands where he could spend most of his time in the water to ward off the heat of the African sun.

Hare chose to live somewhere in between but because it was a small island, he was constantly meeting both Elephant and Hippo on his travels. Hare did not think kindly of either of them as they constantly asked him to do favours and because they were much larger than he was, he had to agree to their requests.

One overcast day, when Hare was out grazing, he thought of a way to get even with Elephant and Hippopotamus. He journeyed to the western part of the island where there were many trees. The lush growth there had encouraged creepers to climb and wind themselves tightly around the sturdy trunks and limbs of trees.

Hare began to pull off some of these creepers, unravelling them to make a long piece of twine. Then he wove together many strands so that the twine was very strong and he carried it away with him.

On his way home, Hare encountered Elephant and cheekily challenged him in this, “Elephant, who do you think has more strength? You or l?” Elephant looked scornfully at Hare. “What a question, – he said -. If I chose to stamp on you, you would be dead in a second.”

“I don’t think so, Elephant. Let us have a contest to test our strength,” said Hare, undoing his creeper twine.  Offering Elephant one end, he asked Elephant to tie it around his leg.

“We will have a tug of war – said Hare -. I will go to the trees in the centre of the island and when I pull on the creeper twine three times, you will start pulling with all might.”

Elephant was reluctant, but he wound the creeper around his wrinkled grey leg while Hare sprinted away. Unbeknown to him, Hare ran to the other side of the island where he found Hippopotamus, submerged in the muddy water.  “Hippo, who would you say is the stronger of us two?”

“Don’t waste my time, stupid Hare. You know the answer already.” “Let’s prove that you are stronger than me,” suggested Hare, watching Hippo stomping along the bottom of the river, unsettling the mud.

Although he was reluctant to take part in Hare’s contest, Hippo eventually agreed and as he limbed out of the water his reddish body glistened. “Here, tie this end of the creeper around your belly, Hippo – said Hare-. And when I pull on the creeper twine three times, you can start pulling.”

Hare sprinted back to the place of the trees in the centre of the island and pulled three times on the creeper twine. On the west side of the island, Elephant pulled with all his might, taking strain. On the east side of the island, Hippo tugged as hard as he could, moving between the water and higher up the bank, depending on how strongly he was being pulled.

From a vantage point amongst the trees, Hare observed the struggle taking place and it brought him great pleasure. When he sensed that he had got the better of both Hippo and Elephant, he suddenly cut the twine in the middle.

Hippo fell backwards into the murky water and bold Elephant fell forward, making him very angry. And so it was that Hare took his revenge on Hippo and Elephant, but from then on, it was very difficult to avoid Elephant and Hippopotamus on that small island and poor Hare lived in fear.