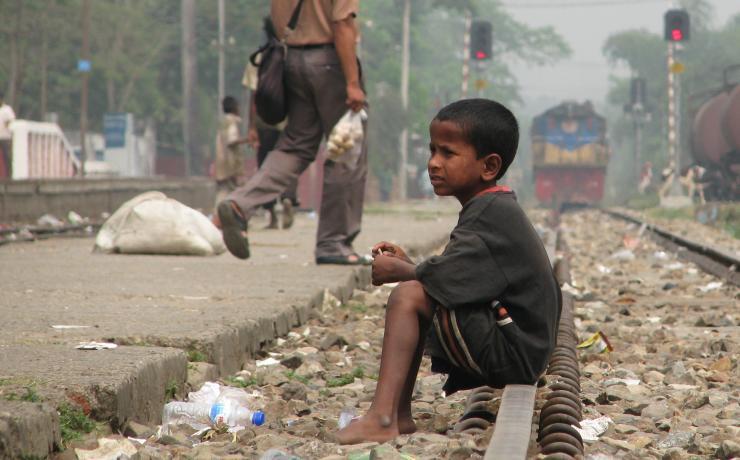 The streets are always crowded. Boys and girls run and play. There is a continuous zig-zag of bicycles, cars, and wheelbarrows. But there are also the harrowing faces of the marginalised, fearful and suspicious street children. If the police arrest them, they are beaten; but mostly people just avoid them.

They live in a world that will have nothing to do with them. 200,000 of these boys and girls live on the streets of Dhaka, the capital of Bangladesh – a city of more than 16 million people. Most of them are between the ages of 6 and 14. Not really orphans, but abandoned children. Father Riccardo Tobanelli, an Italian Xaverian Missionary, knows them well. He has lived in Bangladesh since 1982. He describes them as “having had to look after themselves since they were young children, in degrading conditions of absolute poverty”. He continues: “They have to survive in an emotional desert after being abandoned by their families. They are often victims of abuse. Many are bonded to recycling shops that act as loan sharks, and the children are practically slaves until the loans are repaid – which could be never. Glue sniffing is widespread, and the street children gather at night outside the railway stations or under the highway flyover. Others spend the night under the verandas of shops and offices.”

Tokai is the Bengali word for ‘gathering’, and the Tokai (street children) spend their day gathering plastic, paper, rusty nails, metal, old shoes – anything that can be recycled and therefore has some value. The children sell what they have gathered to shops that specialise in recycling. They do this so they can buy enough food to survive.

Faced with this hellish tragedy, played out every day and involving thousands of street children who were basically enslaved, Father Riccardo decided he couldn’t just look away and pretend this tragedy did not exist. In 1994, he decided to offer them a place where they could sleep in safety and have a meal. Tokai House, as he called it, belonged to the street children. It was their safe haven. He started in the town of Khulna, 200 km from the capital, and opened a separate home for the girls.

In 2005 the street children of Dhaka convinced him to set up Tokai Songho (“the community of street children”) to give the children a place to spend the night without being harassed or robbed by adults, and sometimes even the police. In this shelter, they can get medical attention and a healthy meal. The aim is to help pay off the debts and loans, and allow them to become normal healthy children who go to school and can dream of a bright future.

In the neighbourhood of Kawran Bazaar, a small school was opened specifically for the children who live along the railway track. At night the school becomes a dormitory where the children are given a bed and a meal. At Khulua, Father Riccardo has opened a house for girls who used to be street children or domestic slaves. The Tokai Songho is freeing young girls who were domestic slaves, as rich families used young girls between 5 and 14 as slaves in their homes for domestic work, and to look after their children. The rich families tried to justify this by explaining to the girls’ families that the girls would receive the opportunity of living in a comfortable home and seeing how rich people lived. This would prepare them for domestic work and incite in them the urge to help their families later on in life. But in the meantime, they were working for nothing and had no rights. Father Riccardo is adamant: it is our duty to free these children; to allow them to have an education and let them choose the life they want. We must not make the mistake of abandoning these former street children to slavery a second time.