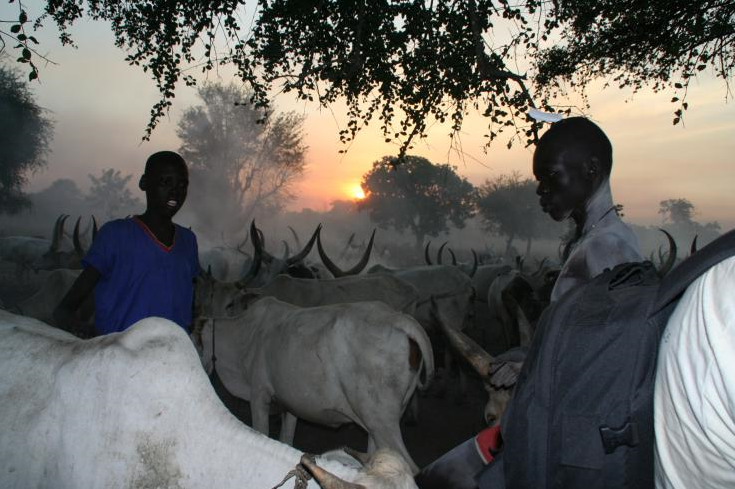 Guricdit Marialjual lives at the Gel river bank on a small plot of land devoted to raising livestock, where there are a dozen tukules (traditional circular huts) made from mud with thatched roofs and high trees. He is probably the oldest person in the village, hence the suffix “dit” (which means “elder” in the Dinka language) attached to his name, Guric. However, like most of the inhabitants of the area, he does not know his age.

Guric moves around on foot holding a long stick. He sometimes carries a spear, which he uses for animal sacrifices to Nhialic (God). These sacrifices are performed to heal illnesses, social disharmony and the difficulties of the people. As a spear master and spiritual guide, he has the ability to mediate between God, totems and men.

Guric cannot read or write: he never attended school, but when, eight years ago, a missionary suggested building a school in the village of Bahrgel, he did not hesitate for a moment, and offered the land of his ancestors, with plenty of mango and tamarind trees and monkeys, and moved to Marialjual.

Guric likes resting in the shade of the trees during the hottest hours of the South Sudanese dry season, but he also collaborates with the construction of several structures to improve the conditions of the camp where he lives.

Some afternoons, he puts his striped hat on, gets his walking stick and crosses the small area of savannah that separates Marialjual from Bahrgel. There he visits the school which, to date, educates sixty students and employs twenty people. Every time he arrives at the school, they offer him some tea or coffee without asking him what he prefers (as a spear master in the Dinka society never asks anything) and simply accepts what people offer him.

Every time he visits the school, he wants to make sure that pupils continue to be committed to their studies, and that the community and chiefs of Bahgel continue to support the activities and the good management of the centre. After his usual walk around the school, Guric reaches a group of women who have been attending some courses at the school for six months to learn new agricultural techniques. The one hundred and twenty women participating in the project have chosen Martha, Guric’s daughter, as leader.

Martha, who works as a cook at the school, has inherited some of her father’s revolutionary spirit. When her husband died she refused to marry his brother (what’s known as a “levirate marriage”), and last year she enrolled her daughter Kana in high school despite her relatives wanting her to get married instead. Guric has always respected Martha’s choices, even when they were contrary to the Dinka tradition, of which he is the principal guarantor.

It is sunset now and one can hear the singing of cicadas as dozens  of women and girls from Bahrgel  cross the savannah eights carrying  large yellow cans. They are headed to the well of the school to get some water. They carry cans which contain twenty litres of water on their head and can still walk nimbly.

Guric is going in the opposite direction, heading home. He walks slowly holding his walking stick, and little by little, he disappears into the high dry grasses.