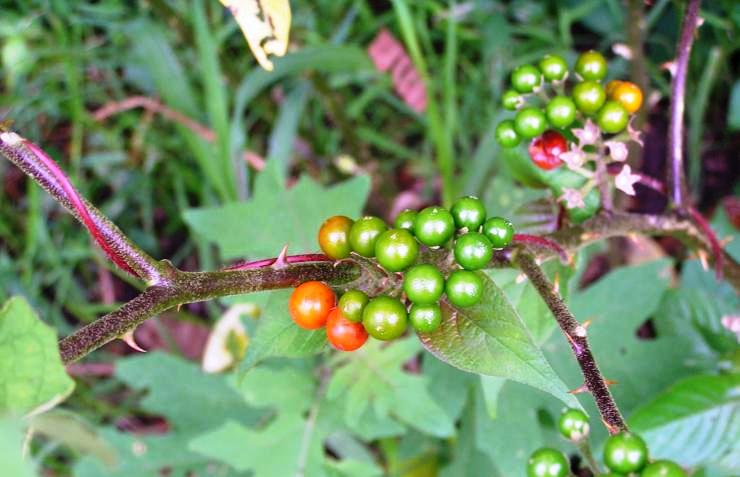 It is a rare ethanomedicinal herb belonging to the family Solanaceae. It is a plant indigenous to non-arid parts of Africa and is commonly known as bitter berry. The plant is used as a therapeutic agent for various diseases and its medicinal value is making it gain lots of recognition in the communities where they are grown.

Solanum anguivi is a shrub and grows up to 3m in height with spreading branches, often prickly, bearing small, sessile stellate hairs. Its leaves are usually alternate, simple and sometimes opposite. The inflorescence is a raceme-like cyme, comprising about 5-15 flowers per inflorescence. The fruit is a sub-globose berry 7-18mm in diameter, smooth, green or white when young and red when ripe, usually in clusters.

They are usually grown by small households and are consumed as leafy and or/fruits or vegetables. Bitter berries are very rich in essential minerals and vitamins. They can be prepared for food in a variety of ways: it can be wrapped in banana leaf and steamed, it can be mashed and mixed with hot boiled water, or it can be cooked together with other foods such as groundnuts and fish amongst others.

The plant is used as a therapeutic agent for various diseases and its medicinal value is making it gain lots of recognition in the communities where they are grown. The presence of important antioxidants such as Vitamin C, polyphenols and carotenoids make bitter berries such an invaluable plant.  For instance, in many countries, the fruits of Solanum anguivi is eaten as vegetable and it is believed to cure hypertension and diabetes. This may be so because the polyphenols contained in the bitter berries aid the muscle layer of blood vessels so that they relax and automatically regulate symptoms of low blood pressure.

The bitter fruit is also used as an appetizer and as ingredient in dishes. In fact, bitter fruits also form dietary staple food and as such are highly recommended as food supplements for nursing mothers, the young, the aged and anaemic patients. Its regular consumption is known to boost the immune system for the children and the elderly who are prone to a number of disease conditions.

Solanum anguivi is a renowned plentiful source of vitamin C; an important vitamin for the formation of collagen, repair and maintenance of bodily tissues. The roots of bitter berry are used as carminative and cough expectorant, nasal ulcers, asthma, difficult parturition, toothache, cardiac disorder, worm expeller, nervous disorder and fever. The leaves and fruits can be rubbed or sap applied externally against itching.

Furthermore, the sap obtained from pounded mixture of the leaves and the fruits of bitter berry is used to treat skin conditions like ringworm and skin rashes when applied in their raw form directly onto the affected part of the skin. The fruits are chewed as a remedy for coughs and chest pains.

Solanum anguivi is also popular for mothers who have just given birth; as they are said to boost breast milk production and also increase fertility rate. The regular consumption of bitter berries is also known to play a key role in weight loss.

United Nation Report: Environmental impacts of the export of used vehicles to the developing world

Ghana: Being a priest in the Venice of Africa

Oral Literature: The Hare, The Lion and The Squirrel