Colombia: The Impact of COVID-19 on Spirituality 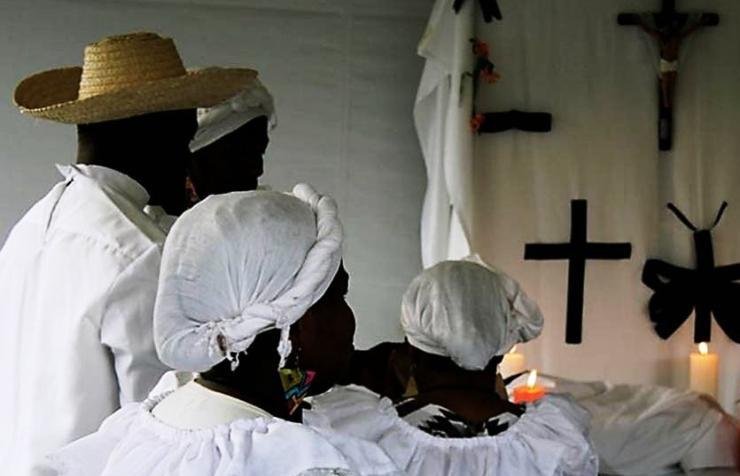 The coronavirus pandemic is changing how people live and relate to others while deeply influencing Afro-Colombian spirituality.

Colombia has one of the largest Afro populations in Latin America. The Afro-Colombians make up 6.68% of the population (49.65 million). The coastal regions of Colombia may have a significant Afro-Colombian population of up to 90% in the case of the Pacific or 60% on the Atlantic coast. The department of Chocó is the most populated Afro-Colombian state, followed by Magdalena, Bolivar and Sucre. Southern Valle, northern Cauca and Uraba have a majority black population. The Afro-Colombians are among the most marginalised communities in the country.

The coronavirus is changing the way people live and in the same way, the pandemic has deeply influenced Afro-Colombian spirituality. Afro-Colombian spirituality is prominently manifested in rituals concerning the dead. They are expressions of solidarity with the dead person and their family. The greatest expression in the funeral rites is the vigil during which people watch over the dead person and accompany their family before the burial. There are usually songs and prayers for the eternal rest of the departed person. Similarly, among the Afro-Colombian communities, love for the dead is shown through the strong manifestation of weeping to express one’s sorrow.

After the burial, the memorial of the deceased is accompanied by a novena both in the house and in church to implore God’s mercy on them. The novena is concluded with a ceremony popularly known as el levantamiento de la tumba (raising the tomb) which is carried out at the house of the dead. During this time of the pandemic, the Afro-Colombians have not been able to follow their spirituality as regards their accompaniment of the dead. Vigils may not be held either in the home or during the funeral. This amounts to a total breakdown of the culture.

This situation is having a terrible psychological effect on people who are prevented from accompanying the departed ones. The aim of the government is to slow the accelerating spread of the virus. Nevertheless, for the Afro-Colombians, this is a serious blow against an ancient custom that has always defined the way of being of the Afro-Colombian people.

In the Afro-Colombian culture, the dead may not be buried with just a few people present. Neither is it common to cremate the dead. The dead are usually buried and the graves are frequently visited. Indeed, the presence of many people is a show of solidarity towards the family. In this time of the pandemic, those who die of COVID-19 must be cremated. For the Afro-Colombian, this is incomprehensible. It goes against their vision of the world. The Afro-Colombian custom is to bury the dead and live peacefully in the days of mourning.

One important element for the Afro-Colombian communities is visiting the cemetery. The cemetery is the permanent home of the dead. It contains the tombs of their dear departed ones. The tombs are visited to maintain contact between the dead and their families and friends. People of African descent, in particular, who live in urban centres, are used to visiting their dear departed one in the cemeteries. It is an ancient custom that is followed every weekend and on the anniversary of the dead. When they visit the tombs, they dedicate the songs they liked, they pray for the dead, clean the tombs, place flowers on them, and if the dead person liked beer, they pour some on the grave. This is a way of showing solidarity with the dead person and keeping their memory alive in the family. Due to the regulations introduced by the government during the pandemic, they are not allowed to visit the cemeteries frequently. Those given permission may not visit in groups but only individually.

The social life of the Afro-Colombian people rotates around the family and friends. In the Afro-Colombian view of the world, one is not limited just to blood ties. The family is not just the house in which one was born but the family is broad and includes the whole community. In this sense, all are brothers and sisters. This familiarity is shown also in places where games such as dominos, cards and other traditional games that express friendship between neighbours and common friends are played.

It is also shown in sharing such drinks as viche, curado, arrechón and in workplaces using uramba and manocambiada, (works carried out for the community). All of this is shattered in this time of the pandemic. COVID-19 has ended social life, people may not gather to chat or to play games since in this period of the pandemic all have to keep their distance from one another to avoid contagion. The coronavirus is therefore bad news in terms of the experience of the sense of the family which has always characterised the Afro-Colombian people.

In the Afro-Colombian view of the world and their way of thinking, the elderly has an essential role in society. In fact, in the extended Afro-Colombian family, the elderly transmits cultural knowledge to the children and the youth. They are like living libraries due to their accumulated wisdom. The family needs the elderly. However, during this time of the pandemic, they are not authorised to leave their houses and they may not meet their relatives in other places for fear of becoming infected. The coronavirus pandemic has caused real damage to Afro-Colombian spirituality.

PreviousThe pandemic response in an unequal world: the way forward with the vaccine
NextComboni Lay Missionaries: Getting Involved

Vocation story: the real sense of being a missionary