Oral Literature: Why the Sun Shines by Day and the Moon by Night 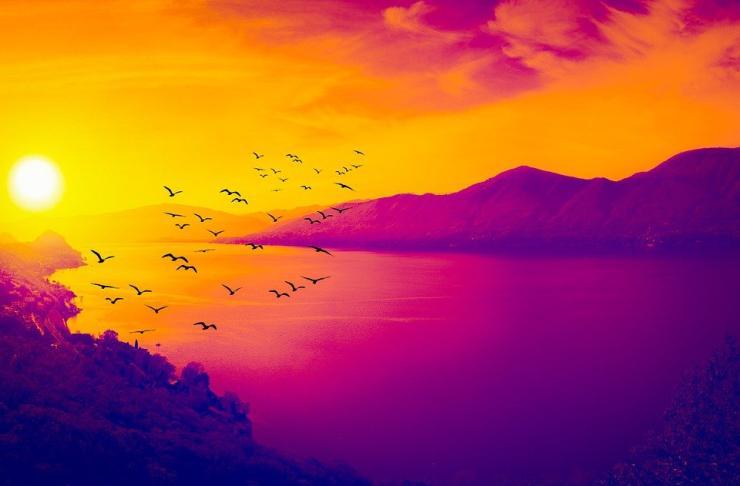 In the beginning of the world the king called the people together to be given their tasks. He sent out messengers for them. He sent the dove to call the moon, and the bat to call the sun. Each messenger was given a certain time to go and return, so that they might all arrive together.

The dove went to call the moon and brought her, and the king said, “I will give you, then, the office the sun should have had, namely, that of shining by night. When you first shine people will beat their drums and blow their trumpets; they will also bring out their fetishes for you to see them, and the fetishes of twins. These are the honours I give you.”

After giving the moon her office and honours the king waited for the bat to bring the sun; but as the bat did not come the king sent the dove to look for her and bring her.

The dove went and returned with the sun. Then the king said, “Because you have stayed so long, I have given to the moon the office I meant to give to you. Now I will give you the office of showing people the way to walk about.”

It was on this account that the sun hated the bat, because he loitered on the way when sent to call him and stayed longer than the time given by the king. Very soon thereafter the sun had a chance to be even with the bat.

The bat later lived at a place with only its aged mother. Shortly after their settling there, the mother suddenly fell sick unto death. The bat called for the antelope, and said to him, “Make some medicine for my mother.” The antelope looked steadily at her to see what her disease was. Then he told the bat, “There is no one who has the medicine that will cure your mother, except the sun.” After saying this, the antelope returned home.

On another day, early in the morning, the bat arose to go to call the sun. He did not start until about seven o’clock. He met the sun on the road around eleven o’clock. And he said to the sun, “My journey was on the way to see you.” The sun replied, “If you have a word to say, speak!”

So the bat requested, “Come! make some medicine for my mother. She is sick.” But the sun replied, “I can’t go to make medicine unless you meet me in my house, not here on the road. Go back; and come to me at my house tomorrow.”

So, the bat went back home. And the day darkened, night came, and all went to sleep. At six o’clock the next day, the bat started out to call the sun. About nine o’clock, he met the sun on the path; and he told the sun what he had come for. But the sun said to him, “Whenever I leave my house, I do not go back, but I keep on to the end of my journey. Go back, for another day.” The bat returned home again.

He made other journeys in order to see the sun at his house, five successive days; but every day he was late and met the sun already on the way of his own journey for his own business.

Finally, on the seventh day, the bat’s mother died. Then the bat, in his grief said, “It is the sun who has killed my mother! Had he made some medicine for her; she would have become well.”

Very many people from afar came together that day at the mourning for the dead. The funeral was held from six o’clock in the morning until eleven o’clock of the next day. At that hour, the bat announced, “Let her be taken to the grave.” He called other beasts to go into the house together with him, in order to carry out the corpse. They took up the body, and carried it on the way to the grave.

On their arrival at the grave, these beasts said to the bat, “We have a rule that, before we bury a person, we must first look upon the face to see who it is.” They then opened the coffin.

When they had looked on the face, they said, “No! we can’t bury this person; for, it is not our relative, it does not belong to us beasts. This person looks like us because he has teeth. And it also has a head like us. But that it has wings, makes it look like a bird. It is a bird. Call for the birds! We shall leave.” So, they departed.

Then the bat called the birds to come. They came, big and little; pelicans, eagles, herons and all the others. When they all had come together, they said to the bat, “Show us the dead body.”

He said to them, “Here it is! Come! look upon it!” They looked at it very carefully. Then they said, “Yes! it resembles us; for, it has wings as we have. But, about the teeth, no! We birds, none of us, have any teeth. This person does not resemble us with those teeth. It does not belong to us.”

And all the birds stepped aside. During the time that the talking had been going on, ants had come and laid hold of the body, and could not be driven away. Then one of the birds said to the bat, “I told you, you ought not to delay the burial, for many things might happen.”

And all the birds and beasts went away. The bat, left alone, said to himself, “The wicked sun alone is to blame for all of my troubles. If he had made some medicine, my mother would not be dead. So, I, the bat, and the sun shall not look on each other again. We shall have no friendship. When he appears, I shall hide myself. I won’t meet him or look at him.”

“And,” he added “I shall mourn for my mother always. I will make no visits. I will walk about only at night, not in the daytime, lest I meet the sun or other people.”