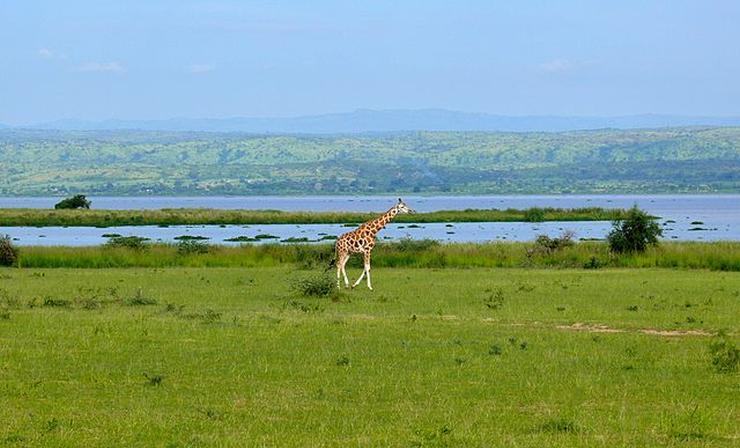 The Ugandan and Tanzanian governments have signed agreements with French oil major Total and China National Offshore Oil Corporation (CNOOC) to build a 1,400-kilometer (900-mile) pipeline from Uganda’s Murchison Falls National Park to the Tanzanian port of Tanga on the Indian Ocean. The pipeline’s critics say 2,000 square kilometres (770 square miles) of protected areas will be impacted and 12,000 families displaced from their land.

If completed, the $3.5 billion pipeline will transport heavy crude from more than 130 wells inside Uganda’s largest national park, which is home to threatened African elephants and lions, a formidable population of Nile crocodiles, and more than 400 bird species. Conservationists say it won’t just threaten wildlife but that it flies in the face of efforts to curb global warming by locking in investment in a dirty fuel.

“We have been working in the oil-rich subregion of Uganda. It’s not a desert, like many oil mining spaces, but rather a high biodiversity area,” said Atuheire Brian at the African Initiative on Food Security & Environment (AIFE). “We can’t afford to have agreements signed in secrecy, and that’s the case for Uganda.”

“Our commitment is to implement these projects in an exemplary and fully transparent manner,” Total CEO Patrick Pouyanné said at the signing ceremony on April 11. Though the event, attended by Ugandan President Yoweri Museveni and Tanzanian President Samia Suluhu Hassan, was televised, the text of the agreements has not been made public.

“Total is also taking into the highest consideration the sensitive environmental context and social stakes of these onshore projects,” Pouyanné added.

But a coalition of NGOs opposing the pipeline says the pipeline planning process has been opaque throughout, disregarding judicial and parliamentary procedures.

The pipeline’s route runs through the Lake Victoria basin, crossing waterways big and small, including the Kagera River. In Uganda, its path will impact almost 2,000 km2 (770 mi2) of protected areas sheltering endangered species including eastern chimpanzees and African savanna elephants.

The prospect of oil spills tarnishing this wilderness and the absence of assurances about mitigation measures have fuelled resistance. The greenlighting of the project in the absence of final environmental and social management plans, drawn up through proper public consultation, has alarmed many.

In March, in response to growing pressure from green groups, the French oil giant announced that its drilling activities in Murchison Falls National Park will be restricted to 1% of the park’s area and that it would bankroll a 50% increase in the number of rangers to bolster conservation efforts.

“Major environmental and human rights risks remain. The top priority should be to deal with the concerns of communities suffering from the project, not start drilling at all cost,” said Antoine Madelin, advocacy director of the International Federation for Human Rights.

More than 12,000 families will be displaced from their ancestral lands to make way for the pipeline. Questions remain about whether they will be adequately compensated. A 2020 report coproduced by Oxfam and other rights-based organizations found that people likely affected by the pipeline in Uganda and Tanzania did not have adequate information about timelines, compensative procedures, and the social and environmental risks involved. The mega project meant to secure the future of populations in the two countries has introduced created greater uncertainty for those whose lives will be most disrupted by it.

To halt the project, green groups are trying to block funding by lobbying investors, banks and insurance companies. In March, an open letter signed by more than 250 civil society organizations called on 25 commercial banks not to finance the project. The campaign led two of Total’s key financiers, Barclays and Credit Suisse, to deny any intention of funding the EACOP.

Annual per capita income in Uganda is less than $800, and the government has pinned its hope on oil riches to pull the country out of poverty. “We believe that this should be a catalyst for economic growth,” Robert Kasande, a top official at Uganda’s ministry of energy, said during the signing ceremony.

Environmentalists point out that the economics of investing in fossil fuels don’t add up. “The whole world is waking up to the fact that we need to stop burning fossil fuels, and as a result, the price of oil will continue to plummet,” the open letter said. “Rather than betting its development on a dying industry, we need to recognize that East Africa’s economic strength comes from the region’s biodiversity, heritage, and natural landscapes.” The agreements signed last April now need to be ratified by the parliaments in Uganda and Tanzania. Construction is expected to begin in July, and the first oil exports are anticipated in 2025.

PreviousHerbs & Plants: Strawberries
NextEight reasons why people are dying in the Mediterranean