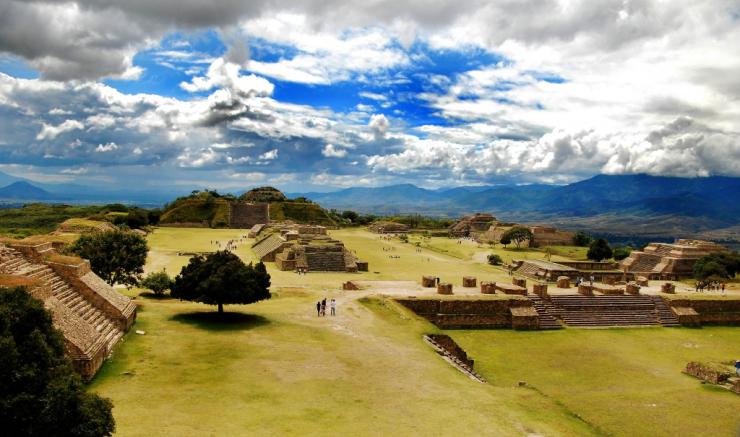 As time pass and cultures evolved, our appreciation to great achievements is enhance with the remaining few that best describes the people or culture that made them. One such achievement is Monte Alban, once the ceremonial capital of Mexico’s Zapotecs who laboured and toiled to create an Olympus in honour of their gods, priests and the nobles.

Located on top of an artificially levelled plateau, Monte Alban was founded approximately 500 B.C. and it rivalled the Maya wonders of Chichen Itza and Palenque then all of a sudden it was deserted nearly 1300 years of existence at the height of its splendour. The site boasted of massive four-tiered pyramids, great palaces and surrounding villages that once filled with activities and today this supersite remains the Mesoamericas’ most puzzling and intriguing mystery.

Called Danibaan or “sacred mountain” before it was renamed Monte Alban from a 17th century Spanish noble Don Montalban. The sprawling 8-acre site is dominated by a great plaza and it rose to its pinnacle of power and influence during the 6th century and after 200 years began to decline rapidly. By 800 A.D. the site was totally abandoned, and it was reduced to ruins that became little more than a glorified cemetery of the Mixtec aristocrats.

The pomp and ceremony of its temples and ritual ball court Nature made its presence felt when encroaching foliage began to smother the neglected temples and pyramids thus burying the towering stone structures. The once vibrant ceremonial centre became a silent ruin, a Mesoamerican ghost town.

A year after Queen Victoria’s death, Mexican archeologist Leopoldo Batres began his pioneering excavations at Monte Alban but his efforts failed to shed much light why the site fell into decay. After 20 years, Alfonso Caso devoted 16 years in an extensive effort to reclaim the neglected city from vines and foliages.

The Zapotecs, inhabitants of Monte Alban, were an ancient people and were generally known by the Aztecs as Nahuatl but they called themselves the Be’ena’a meaning “the people” and are divided into three classes. The peasants and artisans laboured in the fields and worked on civic projects to maintain and restore the temples. Nobles and priests ruled them and their rulers worshipped an array of gods and demigods similar to the ones of ancient Greeks and Romans.

Among these gods, the rain god Coeijo (lightning) was a powerful figure who was worshipped and received sacrifices from the aristocracy atop the pyramids of the Great Plaza. While religion were central components of Zapotec’s life, Monte Alban also served as a governmental and administrative site during its apex of glory. Many leading scholars agree that a new coalition of previously separated political entities in the Oaxaca valley led to the creation of Monte Alban.

It went through five stages of development and the ruling class of priests and novels were remarkably small but dominated the daily lives of the majority of commoners who serve them and maintained the complex of palaces and ceremonial sites. Living conditions of the peasants were poor unlike their rulers who enjoyed luxury and services received from their serfs.

Although Monte Alban sat on a remote mountaintop and built without fortifications, it was never invaded and enjoyed trade and exchange with other great civilizations like the Teotihuacan to the north and the Tikal of the Maya lowlands. They enjoyed centuries of peace and prosperity and the culture grew increasingly sophisticated and complex. It rose to new heights in architecture, sculpture and metallurgy through its processing of gold and silver.

The priests devised two distinct calendars; the 365-day calendar and the 260-day ritual calendars used for divinations and rites. Their system of pictographic writing has never been deciphered because of its complexity. With a logical mind-set, how could this symbol of grandeur and splendour of a great civilization be suddenly abandoned and left to decay?

There are few solid clues and many theories surrounding this mystery. Ernesto Gonzalez Licon and Marcus Winter, both archaeologists, offered possibilities when they wrote at the beginning of the 20th century that Monte Alban’s demise must have been a result of an irrevocable and irresolvable crisis. It was theorised that there existed some discontent and around the 7th century, there seemed to be unrest spreading among the peasants.

From the ruins, it tells that the peasants ceased their sacred duties of maintaining the great buildings of the ceremonial centre.

The once proud Zapotec city became a decaying site due to indifference and wilful neglect and by the year 750 AD, the capital was all but abandoned with only a handful of the population remaining. It would soon be abandoned totally and 500 years later the great plaza and its majestic buildings would be a tombstone of a dead civilization.

Other great civilizations of the region suffered the same fate. Teotihuacan, their main trading partner, was razed around 700 AD when a great fire swept through the vast city. Afterwards, Tikal and other Maya sites to the south were also abandoned in the 9th century. However, economic stagnation was not the sole reason for Monte Alban’s decline since they have other Mesoamerican trading partners and shared many of the social problems of its allies. Problems of overcrowding and population growth could have attributed to its decline.

Over the centuries, its population increased, and this could have been encouraged since a great amount of labour force was needed to carry out its civic projects. As a result, land that was used for cultivation became barren over the passing centuries and the few cultivable lands were not enough to feed its population. This could have led to unrest and discontent by the peasants leaving the site to be abandoned hastily.

The dawn of the 9th century saw the diaspora of Zapotec community settled in Oaxaca’s valleys where they cultivate crops, hunt, and trade with neighbouring tribes. The Zapotec culture did not die with Monte Alban but endured to become a vital and creative community up to this day.

Modern day Zapotecs speak their traditional language and many live in towns and villages at the Oaxaca valley, such as the Teotitlan del Valle – the city of thousand weavers. They continue the creative spirit of their ancestors who built one of the Modern Wonders of the World.

Meanwhile, Monte Alban became a UNESCO Cultural Patrimony of Humanity site in 1987 where its great buildings and ceremonial sites were restored to their former glory.

Monte Alban testifies to the capacity of people in attaining seemingly impossible heights but there is a darker side through Monte Alban’s ruins where even the most cherished and splendid achievements can crumble as fast as it was created.

PreviousMission Diary: the Winds of Arequipa
NextOlympics: Refugee Team to compete in Tokyo