Oral Literature: The Buffalo and the Bees 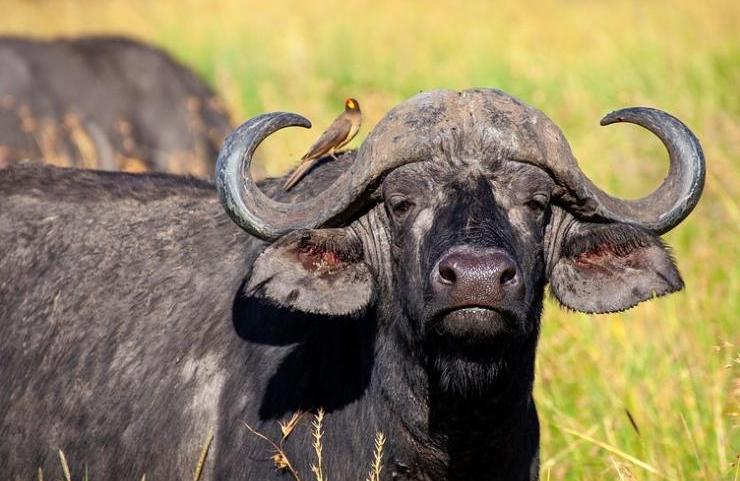 It was while grazing one night under the watchful eye of the king of the night and his tribe of stars, that the leader of a herd of very strong buffaloes decided to move to a place where there was better grazing.

They journeyed for many days and arrived at a place where life was good. Deer had made the forest their resting place, hares found plenty of food in the fields of Man and Tortoise sunned himself on the banks of the river. The only dangers in that area were snakes that lived in the bush and lions whose roars made all the animals tremble.

But when the buffaloes arrived, they brought disaster with them. The powerful dark brown beasts that were the colour of bark, trampled the crops and destroyed them. Small animals were crushed under their heavy feet without the buffaloes even noticing them. And if it were not for their hard protective shells, even Tortoise and his family would have been destroyed. So, the animals called a meeting to discuss what could be done.

Tortoise spoke out first, “I think that we should approach the head of the buffalo herd and complain about all the destruction caused by his family. Then we need to ask them to inflict less damage to the land.” The animals agreed with Tortoise and decided to go in search of the cunning head of the herd, whom they found asleep.

“He will be very angry if we wake him,” said Deer. “Buffaloes are known to be very dangerous, especially when confronted.” “So, what,” said Lion assertively in a loud voice. “We haven’t come all this way for nothing!” But their strong voices disturbed Buffalo and he shouted out angrily, “Why did you wake me?” “Sorry,” said Lion, “but we have travelled far to see you.”

“And what do you want?” asked Buffalo, grabbing a tuft of grass. “We have come to ask you to be more considerate,” pleaded Tortoise, keeping his distance. “You have caused great damage, although I’m sure that was never your intention.”

Buffalo scowled at Tortoise and shook his back in anticipation of the relief he would get from the ticks on the oxpecker bird, which had just arrived. Cautiously, Tortoise continued, “In your stampede you have crushed birds and small creatures. Even members of my family were trampled and only survived because of their tough shells.”

Boldly Tortoise continued to speak while the buffalo leader grazed the lush grass. “You have also destroyed Man’s crops and I warn you that if he starts hunting your flesh, everyone could become victims. Please keep away from the crops and allow my family and the turtles to use a section of the riverbank.” “And, please, be careful where you tread,” pleaded Hare.

By now Buffalo was furious. “We are doing what we have always done. This is how we live and as rulers of the bush we are entitled to do as we please. So, take care of yourselves and we shall take care of ourselves; and if Man intervenes, he’ll regret it.”

Anger grew in Lion and he responded to Buffalo’s arrogance by crying out in a loud voice. “You think that you are king of the bush, but it is widely known that we lions rule the bush. Let us fight to see who is the king.” “Stop!” pleaded Tortoise, retracting his head.

But a fight broke out between Lion and Buffalo and the animals formed a circle around them. Lion, who was past his prime, hadn’t fought for a long time and all the animals feared that he would lose the duel. Buffalo fought fearlessly. Although he had been injured by Lion, the ruler of the buffaloes pinned his opponent to the ground, broke his back and caused Lion to take his last breath.

The animals were distraught and Python seethed with anger. He believed that he was stronger than Lion and that had he fought Buffalo, he would have been successful. “The matter is settled,” said Buffalo, staggering a little “I am ruler of this region. Does anyone dare to disagree with that?”

“I do,” said Python, surging towards the powerful beast to fight him. But when he realized that he was losing the fight due to injuries, he withdrew. “This shows us that we shall have to rely on brains rather than brute force,” observed Tortoise.

“Listen,” said Hare. “I went to Man’s fields this morning and overheard him say that he wanted to get rid of the buffalo herd.” “Then we can enlist Man’s help,” said Tortoise, showing pleasure. “I need a monkey and a queen bee.” Then he sent to find them.

On their arrival Tortoise said “Please. Queen Bee, could you provide us with a hive so that we can eradicate the buffalo ruler who has caused so much damage here?”

The Queen Bee was reluctant; however, it was agreed that Monkey would fetch the hive. Tortoise then asked Hare to summon the wild pigs who were digging in the distance. “Please dig a hole for us under that large spreading tree over there” asked Tortoise, politely. “What is our reward? – asked shrewd Pig. “Getting rid of the buffalo herd!” answered the Tortoise.

“Alright then,” said Pig, digging an enormous hole that was well covered and concealed with branches and leaves by the monkeys. “This is a great trap,” said Monkey, who loved to deceive other animals. Tortoise instructed the monkeys to get the beehive and place it next to the trap. Then Tortoise asked Monkey to go and find Buffalo who was eventually found wallowing in the muddy waters of the river.

Meanwhile Monkey sat on the bank of the river, his charcoal fur lit by the last rays of the sun and cried out loud while smearing mud all over his body. “What is wrong with you, Monkey?” asked Buffalo, puzzled. “You look agitated.” “I stole some honey this morning and knocked over the hive. The bees then turned on me and stung me! Ooh! I’m in such pain. My body aches,” said the Monkey.

Buffalo listened attentively.  “There is such a wonderful supply of honey… but I am too sick to eat it… what a shame…” continued the Monkey. “Where is it?” asked Buffalo.

“Under that large tree,” said the Monkey. Buffalo left Monkey rolling in the mud and went in the direction of the honey. Monkey was not the only one watching him; Tortoise and Hare followed Buffalo with their eyes as he approached the hive. Then suddenly they heard a loud yell as Buffalo fell through the leaves into the deep, dark pit. “We’ve captured him at last,” said Hare.

“But there’s more to do,” said Tortoise. “Hare, you go to the village and activate the dogs.” When they saw Hare run by, the dogs barked excitedly and chased Hare all the way back to the large hole under the tree. And when they heard their dogs yelping, the men of the village ran after them to investigate what had happened.

“It’s that Buffalo who has destroyed all our crops,” said one of the men. “Let’s kill him and have a feast.” And so, all the animals joined in the feast that continued throughout the night and the next day and when the rest of the herd discovered that they had lost their leader, the buffaloes moved on to new grazing. Tortoise, Hare and Monkey were delighted.