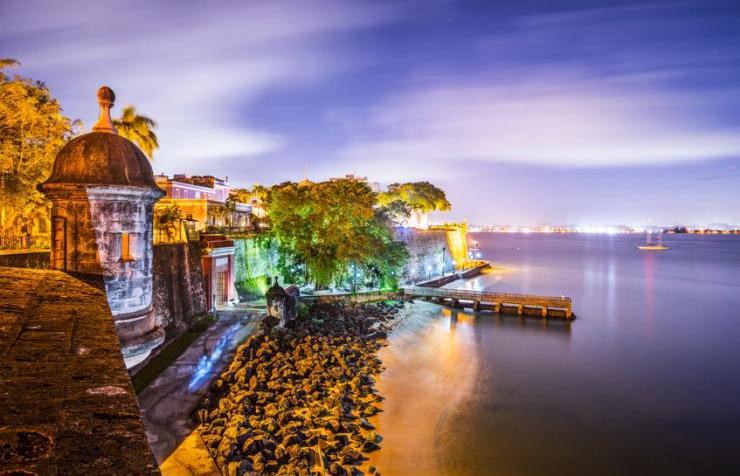 If you take a walk at sunset along the north-eastern beach of Puerto Rico at the end of July, you can hear the sound of drums giving the welcome to nightfall.

Groups of people get together in front of their houses or under coconut trees ready to dance to the rhythm of the drums. The smell of fried fish and cries of joy announce the Saint James feast held in Loiza, a village that combines Spanish culture and African traditions.

Here, people celebrate with enthusiasm and in typical African-Boriquen style (Boriquen is the indigenous Indian name for Puerto Rico) the feast of the town’s patron saint, St. James the Apostle, the Yoruba people’s Shango. It is an annual multi-day event that occurs around July 25, the feast day of Saint James, who is believed to have appeared in a tree trunk, years ago.

An event that has been celebrated, in the inhabitants’ words, “since God walked on earth”, referring to it as a feast, the origins of which are lost in the mists of time. The majority of population in Loiza is black. Along the centuries, the joining of Yoruba and Christian elements has given rise to strong religious syncretism in this community. In fact, in the Yoruba culture, brought by the Nigerian enslaved people, Shango is the deity of war and lightning, and has the power to call down fire from heaven and destroy the infidel. Shango is depicted as a warrior on horseback, just like St. James.

Each of these statues are guarded throughout the year by three people, usually women distinguished for their devotion to the Saint. They are in charge of preparing the statues for the celebration. The statues will be carried in procession through town from the church. The guardians of the statues enjoy widespread prestige in the village. Before celebrating the feast, preparatory novenas are held.  These novena songs are readapted to the typical African rhythm and tone and have particular emotional and spiritual impact on the devotees.

During celebrations, people follow the three statues carried in procession through the streets of the village, singing and dancing in their traditional costumes. The three statues play a specific role in the traditional celebrations: the caballero figure represents the force of good in the fight against evil. The vejigante image is the antithesis of the caballero figure, it represents evil, the devil that S. James must fight.

The vejigante mask has grotesque facial expression with exaggerated nose and teeth and has horns on the front or on the side of the mask. The vejigante has become a popular symbol of St. James’ feast. The “Viejo” (the old man) figure, fallen into disuse by now, represents an old man wearing rags, that wanders about looking for gifts. St. James’ celebration with its processions, dances, music, and mass celebrations is still one of the most popular and traditional “fiestas”.

Bomba dancing is the main attraction during Loíza’s festival of Santiago. The black labourers, who worked on plantations created the bomba in the 18th century as their primary social dance. Distinctive bomba styles have developed in various parts of the island, such as: sikti, coembé , kalindti , yulti , cocobalé , babu , calindti, all words of African origin. Given the long history of slavery, colonialism and the attempts to strip black people of their African culture, it is important to the Puerto Ricans to highlight, by names and symbols, the African legacy.

Bomba dance is to these people a representation of self-affirmation and an attempt to preserve and recuperate their real image and history. Bomba, amongst enslaved peoples living along the coastal areas where they cultivated sugar cane, was a way to reassert their dignity and recovering their past. Basically “Bomba” came to be a language in common among African enslaved people who spoke different languages.  It represented an important moment of unity and cohesion. Bomba dances, songs, the beating of drums during the feast of St. James, usually express the alternative language, and reflect a deep social organization, an understanding of social reality and a way to express feelings of joy and concern.

The participants of the dance create a circle, that includes musicians, among them at least two drummers, and singers. The women’s voices are predominant. Dancers enter the circle and begin to dance. Next, dancers approach the drummers and salutes to express respect. From this point, the dancers improvise accents to challenge or converse with the high-pitched drum.

The more equally matched in skill that the drummer and dancer are, the more intricate and satisfying the bomba will be. It becomes a dialogue between dancers and drummers. Bomba is a body language dance. Various bomba rhythms, verse structures, and intensities guide the dancers in movements and attitudes. Each rhythm calls for a different attitude. It is an important moment of cultural performance to the people of the village. It is also a way to express different realities: the need of a non-linguistic communication for those who are victims of social and economic oppression.

The chance to express through music and dance what would be prohibited in a different context. A moment and a place where individuals through body language and music talk feel socially free in an atmosphere of mutual respect. Still today, Bomba reflects the African heritage brought by slaves: it is a cultural expression that resists the pressures of the modern world. Bomba is a source of identity and dignity for people who were marginalised due to racial and class discriminations. This dance is an instrument of integration and cohesion resisting socio- political and economic pressure.  St. James’ feast and bomb dances have kept Loiza people attached to African traditions. These celebrations, even if influenced in recent times, by modernization, symbolize the dignity of a people who continue to make a significant contribution to culture.

PreviousUN Report: next 18 months crucial for achieving global goals
NextFour things you need to know about forests and health

Vocation story: the real sense of being a missionary