Oral Literature: The Spider and the Sky God’s Stories 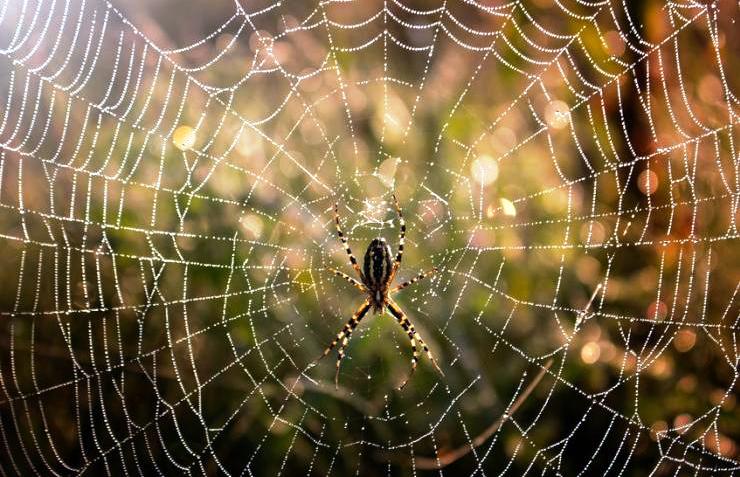 “What makes you think you will be able to buy my stories?” – said the Sky God – “Many wise men have tried to buy my stories.” “I know I shall be able to buy them,” said Spider.
The Sky God looked at Spider a long time. Then he said, “The stories can only be bought for Python, the Big Snake, and the Hornets who can sting you to death and Leopard who is very fierce and can kill you.”

Now Spider was very small but he and his wife were very smart. He went home to his wife and told her what the Sky God had said. They talked together for a long time. Then the wife said, “Cut a long branch from a tree and cut some vines that are like rope. The Water Spirit will tell you what to do with it.” Spider cut the branch and the vines. He went to the stream where Python, the Big Snake lived. He sat by the stream and started to sing. “It is as long as he is No, it is not as long as he is Yes, it is as long as he is.”

Spider laid the branch beside Python’s body. He quickly tied Python to the branch with the vines that were like ropes. Spider said, “I shall take you to the Chief of the Sky Gods.”
The Sky God looked at Python tied to the branch and he said, “Spider, you have brought Python. But there is still something that you must do. Bring me the Hornets.”

Spider went home to his wife and said, “The Chief of the Sky Gods looked at Python. Then he said, `Bring me the Hornets.’ I am afraid the Hornets may sting me to death.” “Spider – his Wife said -. Get a large gourd and fill it with water. The Spirit of the Water will tell you what to do.”
Spider found a big gourd and filled it with water. Then he put a big leaf on his head.

In the forest, the Hornets were flying in and out of their nest. Spider sprinkled half of the water over the Hornets. He poured the other half of the water over his head. Spider cried, “The rains are coming. The rains are coming, and I am all wet.”
“It is too early for the rains – cried the Hornets.” “But you are all wet and I am all wet,” cried Spider. “Come get into this big gourd so that the rains will not hurt you.”  “Thank you, thank you,” cried the Hornets as they flew into the big gourd. Spider closed the gourd with the big leaf that was on his head. Then he took the gourd full of Hornets to the Sky God. “You have brought me the Hornets who can sting you to death – said the Sky God -. There is still a thing to be done. Bring me Leopard. Then you can have my stories.”

Spider went home to his wife. He told her what the Sky God had said. “You must still get Leopard,” said his Wife. “Go and dig a pit.” “I understand,” said Spider.
He went off to the forest and found the path where the Leopard went down to the pond to get a drink. He dug a deep pit in the middle of the path. He put the brush on the top of the pit. That night Leopard fell into the pit when he went to get a drink.

Early the next morning Spider went to the pit and found Leopard. “I have told you many times not to get drunk” – said Spider – “You were drunk last night and you fell into the pit.”
“Dear Friend,” –  cried Leopard –  “Help me out of this pit.”

“No, No” – cried Leopard – “I would not kill you, Spider. Please help me out of this pit.”
Spider went and cut two small branches from a tree and put them at the top of the pit. “Leopard” – said Spider – “put one paw here and the other paw there.”

Leopard started to climb out of the pit. When his head came up to the top of the pit, Spider hit him so hard that his eyes closed, and Leopard fell back to the bottom of the pit. Then Spider got a ladder and climbed down to the bottom of the pit. He tied Leopard up so he could not move. As Leopard opened his eyes, Spider said: “Fool, now I shall take you to the Chief of the Sky Gods. You are the last thing that I have to bring to him. Now he will let me buy his stories.”

When the Sky God saw Leopard tied up, he called the other Sky Gods and said to them, “Many wise men have come to me wanting to buy my stories. But none of them but Spider could do the things I asked them to do. Spider has been able to buy the Sky God’s stories. Spider is little, but he is very smart. He has done the three things that I asked him to do. From now on no one will call them the Sky God’s Stories. They will be called Spider Stories.” And that is why in Africa there are so many Spider Stories.