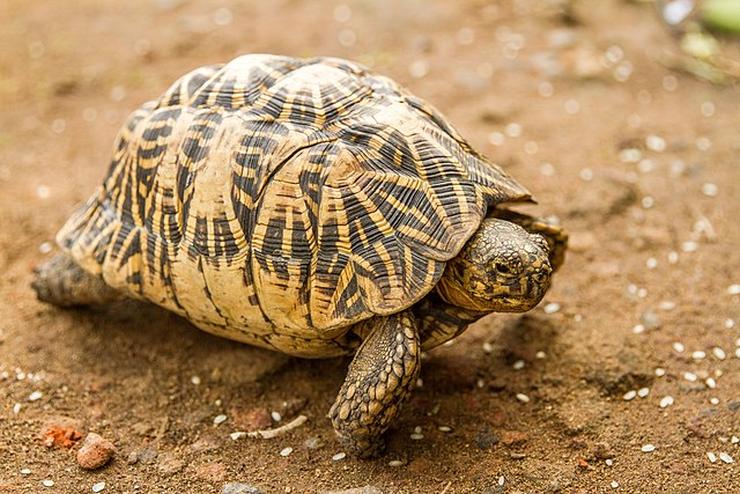 There was a famine in a certain town. Every creature in that town was hungry except a dog who knew of a tree in the nearby forest which supplied him with food. No one but the dog knew where he obtained his food.

Now there lived in the town a tortoise. He was so hungry he would watch the dog to see what he threw away and then he would eat the scraps. Finally, the tortoise spoke to the dog: “Neighbour dog, I can no longer endure my suffering of hunger. Tell me where you obtain your food.”

After the tortoise had begged the dog many times to tell them, the dog, at last, revealed his secret, on the strict promise that the tortoise would tell no one. The tortoise promised. The dog showed him the tree in the forest on which the food grew and allowed them to eat there.

But the tortoise abused his good fortune. He went to the tree when he knew the dog was not there. He ate until he could hardly move and when he did go away, he took with him an enormous basket filled with food.

One day when the dog went to the tree to have his breakfast, he noticed that a great portion of the food was gone. The dog hid and watched to see who might come. As he watched he saw the tortoise approach.

The tortoise was pushing his enormous basket. The dog waited until the tortoise began to pick the food from the tree. Then he jumped out at them, barking furiously. “Now I will kill you,” shouted the dog to the trembling tortoise.

The tortoise begged for mercy, then turned and ran until he found a swamp in which to hide. But the dog chased him and taking a big stick tried to catch the tortoise. Every time the tortoise was struck with the stick he sang in pretended joy and every time the dog missed him he cried as if in pain. Then a wise man came to watch the dog and explained the tortoise’s trick. The dog quickly managed to catch hold of the tortoise after that, dragged him out of the swamp and threw him so hard against the side of a very hard tree trunk that his shell was cracked and broken.

The dog left, thinking the tortoise would die. But tortoises are strong little creatures and the tortoise began to recover. A passing traveller knocked his foot against the tortoise thinking it was a stone. Always cunning, the tortoise cried out, “Look what you have done. You have broken my shell.”

The traveller produced his tools from the bag he was carrying. He put together the many pieces of broken tortoise-shell. Even today we can see that the shell of a tortoise is of many pieces which have been put together.