Bolivia – Under the spell of the rich mountain 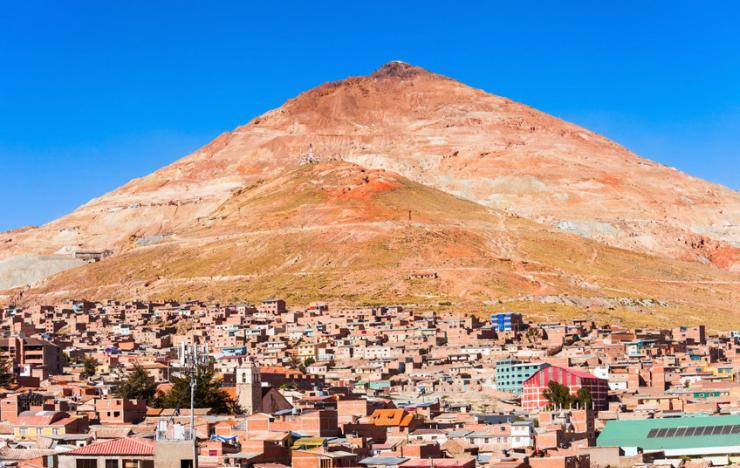 They toil in dark and poorly secured tunnels – always looking for the one good mine that will make everyone rich. But what the miners find in the silver mountain of Potosí in Bolivia is hardly enough to live on. A community of Catholic Sisters is helping the miners’ families in this particular moment of the pandemic.

When the first rays of the morning sun bathe Cerro Rico, the rich mountain of Potosí, in a pale light and the city is still damp and quiet, frozen in the icy morning stiffness, then Percy Fuertes stands up and calls on God. He does so every morning before he goes into the mine.

In Potosí everything has revolved around mining for 500 years. The shops sell dynamite sticks, hoses and compressors, and the most imposing building in town is the old mint from colonial times. Trucks and dirty country vehicles rattle through the narrow streets. There is permanent fine dust over the mining town. It penetrates every crack, settles on every piece of furniture, dusts the streets and finds its way into every lung, already struggling for oxygen at an altitude of 4,000 meters.

The mountain has spat out an endless stream of miners terminally ill with lung disease. Many, too, have swallowed its poison working in its deceptive, slippery tunnels or have been poisoned by ammonia or other gases. A supply of cheap ethyl alcohol, sold for the equivalent of one Euro for a quarter of a litre, has tempted thousands to fritter away their money and lives to the detriment of their families. The average life expectancy of a miner is 40 years.

Fuertes has already lived longer. He is 43 and still sinewy and strong enough for the backbreaking work in the mountains. “Every morning there is oatmeal with milk, it makes you strong and protects the lungs”, he says, a gold tooth flashing in his mouth as he smiles. But his humour is false. He hugs his wife Virginia Condori in silence.

The relentless mountain sun, the icy wind and the many worries have tanned the 47 year-old’s face dark and covered it with a small network of wrinkles. In a husky voice, she wishes her husband “Good luck!” – and does not know whether and in what condition he will return in the evening. Scratches and bruises are the order of the day.

Fuertes works in a team of four on behalf of the broker of a subcontractor disguised as a cooperative that has a concession for a tunnel at 4,300 meters above sea level on the flank of Cerro Rico. The extracted rock is then resold to one of the many smelting plants that are in turn owned by other companies. The ownership and employment relations in Bolivian mining are opaque.

Luz Rivera from the social pastoral work of the Catholic Church in Potosí speaks of “slave-like exploitation”. “There are no employment contracts, no social security, the men have to buy the equipment themselves, even organize the journey to and from the mine themselves. Wages are paid weekly, and if the foreman wants, he will arbitrarily deduct something or fire someone without notice”, she says.

Fuertes is a demolition expert. Deep in the tunnel, he uses a pneumatic hammer to drill the holes in which the dynamite sticks are inserted. The fuse, about one and a half meters long, gives him three to four minutes to move away from the blasting site. But running is impossible in the narrow tunnel, which is no more than 1.60 meters high. The ground between the tracks is muddy; the light from headlamps is reflected by thousands of dust particles. The pressure waves from the dull explosions almost burst the eardrums and make breathing even more difficult.

As soon as the dust settles, the men go back into the mine and load the wrought-iron tip-wagon with rock. A loaded truck weighs up to a ton, and can hardly be moved even by two men. Thick beads of sweat form on the foreheads of Fuertes’ two young partners as they push the truck into the daylight.

The group of four produces from eight to ten truckloads on a working day that ends between four and five in the afternoon. There is no break for a meal, just some chewed coca leaves in your cheek pouch to fight off hunger and fatigue. Each one of them takes home barely 250 Euro at the end of the month.

“I’ve told him many times to look for another job”, Virginia sighs as she hangs out her washing in her bleak courtyard. Two puppies scramble on the bare concrete floor and the blue paint is peeling off the walls. Fuertes has sometimes worked as a day labourer on the construction site. But he is a man of the dark. He has been working in the mine since he was 16, and toiling in the hot sunlight is not good for him. In the mine he earns twice as much as in the construction industry, but even that is not enough to support the family properly.

“I used to work for a mining company and even had social security”, he says proudly. But then came the economic crisis and now the Coronavirus.

Because of the pandemic, there was a strict quarantine in Bolivia for four months. Everything stopped moving in Cerro Rico. Fuertes was fired. His wife lost her job as a cleaner in a hostel due to a lack of guests. The family survived thanks only to emergency aid from the State and food donations from the church.

Sister Damiana Rodriguez knows the family well. The three daughters Almendra, 15, and the twins Catherine and Rocío, 8, go to the school of the Order of San Jose de Treveris, which is located in the middle of the mining district of San Pedro. It was founded 28 years ago to enable the miners’ daughters to graduate from high school and open up other life prospects. “Girls suffer particularly in the macho world of miners”, says Sr. Damiana. Women have only a subordinate place. They marry young, get pregnant quickly and suffer at the hands of drinking husbands who beat them. They become widows at an early age.

When many families at the Copacabana School became unemployed during the Coronavirus pandemic, the Sisters helped those in particular need with food parcels. A few brightly coloured bags full of rice, pasta, beans, cooking oil and soap are still piled up in a classroom. Virginia and Fuertes grow their own beans and potatoes on a small piece of land outside the city that his parents have given him.

“At least we didn’t starve to death – says Virginia -, but sometimes there was only one meal a day”. From what she had saved from her work at the hostel, she bought a cell phone so that her three daughters and 12-year-old Fabricio could at least take part in distance learning. “Sometimes the courses overlap, sometimes I don’t have the money to top up the data quota on my cell phone”, she says.

Fortunately, the little house in which they live with their in-laws is not far from the school where parents can pick up worksheets or books in person. “In March, the State shut down the school overnight and left us alone. We had to improvise distance learning”, says Sister Damiana, who teaches ethics and religion.

Sometimes she comes to school for meetings with the teaching staff or to hand out material to parents. The empty classrooms make her sad every time. “I miss the life, the laughter and the noise of the girls”, she sighs. The pandemic is a serious set-back for the education system in Bolivia. In primary school, only half of the children can take part in video classes, in the upper school it is just 30 per cent. According to the social worker Rivera’s estimates, child labour in Potosí has risen from 10,000 to 15,000 as a result of the pandemic. There are no official figures.

No glasses, no shoes

At home, the Fuertes family navigates the crisis. The children watch TV or play with the two puppies Poli and Canela. They used to hang out with friends a lot. Fabricio used to go to a football club and Almendra was active in the church youth group. The pandemic has kept all of that to a minimum.

The school books picked up by Fuentes at school are a welcome change. The fact that Sister Damiana came with them also encourages the twins to demonstrate the reading skills they acquired the previous year and painstakingly preserved during the pandemic. Catherine reads quite fluently but Rocío stops and starts. She doesn’t see well and actually needs glasses. But there is no money for that. Not even for real shoes. The twins grew out of the old ones during the pandemic, and slippers have to do for the time being, despite the cold.

Fuertes casts a glance out of the corner of his eye at his two girls. “Maybe we can still find the veta”, he mumbles, the rich vein that all miners dream of. “Then I would definitely quit and offer my family a better life”.

PreviousMexico: Tortillas – God’s food
NextBrazil – The Tree of the Land of the Free People