Reflection: The War with No End 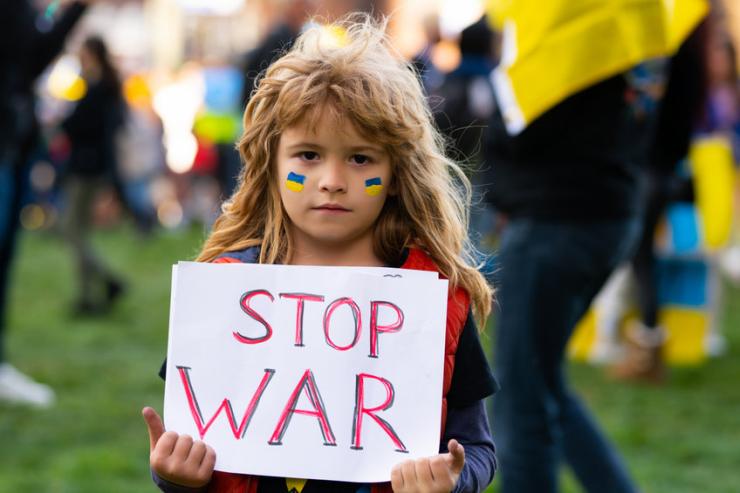 Pope Francis did. He walked into the Russian embassy in Rome to express what hundreds of millions of people around the world feel and believe that the invasion of Ukraine is immoral, evil, wrong and repugnant. A return to war in Europe is shocking and unbelievable for many. It will be a war without end as its effects will last for a generation.

So, it is evil, destructive and vicious and causes the horrifying reality of death and wounded and all who approve, support, enable and applaud such evil action may also be participating in immoral acts of violent crimes against humanity and being companions of evil. When we remain totally silent in the face of evil, wrong-doing and human rights violations, we can be part of the crime by our refusal to stand against it.

Who can approve war but only those who will benefit from it. The suppliers of weapons, ammunition and war material are the ones to gain. The instigator of the war, Vladimir Putin, president of Russia, hopes to gain prestige, power, praise and expand his control and take Ukraine back into his and Russia’s control and influence. That is how it is with Vladimir Putin who has tasted the bitter loss of national prestige when Russia collapsed in 1991 and the Soviet Union fell apart. Many countries once under its once powerful sway declared independence as did Ukraine. That was bitter medicine for the old Soviets and they are choking on it until now.

The driving force of Putin, now twenty years in power, is his desire to exert power, restore the twisted pride and image of a once mighty Soviet Union of which he was once a part of and before which the world once trembled but then no more. That is until he put his nuclear force on alert. He wants the world’s attention. He needs to be respected and feared. He hates the fact that so many former Soviet-controlled countries are now members of the EU and NATO and Russia is a second-rate power.

He wants to restore Russia as a leading great power and be respected. He wants his legacy in history to be that he brought Ukraine back into its fold and control with blood and lives and perhaps other nations too. The quick victory and capitulation of Ukraine has eluded him as the Ukrainian people and army have put up a great resistance and halted his advance. He will eventually overwhelm them as the Western powers cannot intervene lest they start a world war.  Ukraine is not a member of NATO and they will not start a war with Russia. The prospect of Ukraine joining the EU is what Putin fears. It will be lost to Russia forever so he wants to capture Ukraine before it does join NATO.

Putin resents the modernization of the Ukrainian economy and culture by being closer to the EU and the West. He may see it as a rebuke to him and a threat to the stability of the thread-bare economy of Russia and the relative poverty of the Russian people. They might want to oust him one day. They want higher standards of living and greater freedom and prosperity. Putin has stifled dissent and protest with cruelty and repression. That economic hardship is increasing with the sanctions being imposed. This war and invasion could backfire badly for him but his generals are not telling him the thousands of Russians killed and weapons destroyed.

The international sanctions suddenly cut off the Russian economy from the Swift system, a fast international payments system that speeds the financial transactions around the world, and it is damaging the Russian economy. The freezing of the financial accounts of Russia held in countries outside Russia is a disaster his nation is now cut off from the world, economically, trading, sports and culturally. Foreign investors are closing down and leaving.

The value of the Russian ruble has dropped like a stone against all major currencies. All this has to be a cause of concern. Putin has to be alarmed and worried. Besides, his oligarchs whom he enriched with billions and power to protect him and hide his personal wealth are losing their prestige, property and freedom to fly everywhere they want. Russian flights are barred everywhere. Their luxury, million-dollar yachts moored in Mediterranean ports may be targets for sabotage as one sailor tried to scuttle one recently. The ships will be held by sanctions in ports. The French government has held up one ship owned by a Russian oligarch. The oligarchs created Putin and they are now losing billions of dollars as their stocks and shares and companies are failing. They may want to have a new puppet.

Putin cannot accept or endure any criticism, challenge or opposition. He ordered his opponents poisoned and assassinated in Russia and outside it. He totally controls the media and dissent is not allowed. Thousands of Russians who protested the war are being arrested. Russia is a dictatorship and now Putin is the new Hitler as Time Magazine pictures him on its front cover. He and not the Russian people has released the dogs of war, but they are suffering as a direct consequence. He sees himself as a strong, historical heroic person, the strong leader image which Russia has always desired. Instead, in the eyes of the world, he will be seen as a warmonger and dictator not the one that won Ukraine from the West.

As the hundreds of thousands of Ukrainians flee the bombs as refugees, the Eastern countries of the EU have opened their borders and allowed them to enter freely without formal asylum applications. Compare this to the barbed wire fences and troops deployed to the same borders to stop Muslims and black refugees from entering. The dramatic change of immigration policy is, as one commentator said, “These refugees are white, Christian and like us, not Muslim or black, they are one of us.” Even in war, racial discrimination is a national virus and weakness.