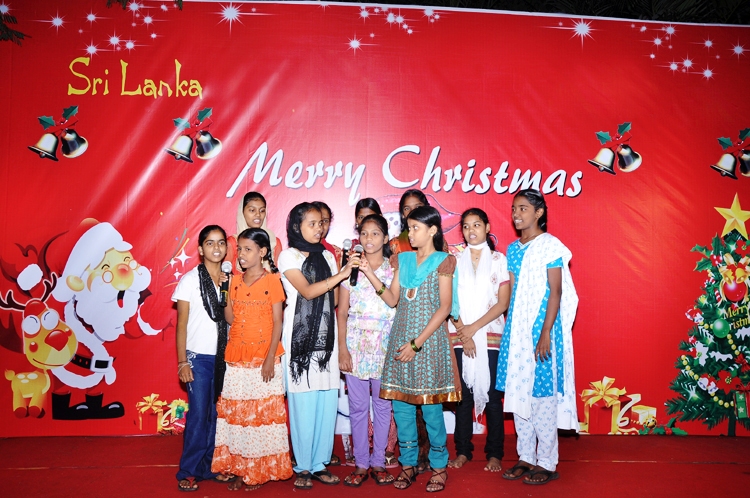 In Sri Lanka, December has always been a popular month – because it’s harvest time. After the first conversions to Catholicism in the 16th century, the month was renamed “Nattal rnase”, which literally means “Christmas month”. Today, celebrations remain a mixture of harvest festival and Christian traditions.

Sri Lanka today is a predominantly Sinhala-Buddhist state. But for centuries, the land of the Sinhalese attracted and brought together a varied mixture of Christians, Hindus, and Muslims – whose descendants today comprise over 30% of the country’s total population. The present generations represent a bold blend of the diversity and richness of these cultures, traditions, and religious beliefs.

A culture of rice and grain

Unlike Muslim traders and the communities of Tamil marine fishermen (who settled along the coastal belt), the native Sinhalese (whose language is Sinhala) have always attributed great importance to irrigation, rice farming, and community-based agriculture. For a very long time, Sri Lanka has been known as “the Granary of the East”. The twelve months of the year were named to reflect not merely the essence of a season’s charm, but also to identify each month as distinct from the others. December, for example, was named “Unduwap” in the Sinhala lunar calendar. Later on, with Christian conversions following the arrival of the Portuguese in Sri Lanka (1505), the twelfth month became popularly christened by the Sinhalese as “Nattal rnase,” meaning “the month of Christmas”.

“Nattal” in Sri Lanka ushers in the festive season, traditionally celebrated throughout the island. People very much look forward to this festival at the end of the year. Christians use the season to observe and spread the wonderful message of Christmas. They share it with their poorest neighbours, spreading the message of goodwill and peace among all. For children, it means the end of school, the completion of final exams, and the accompanying rewards for those who reached the next form. Myriads of young choristers or actors, trained by their teachers, prepare school concerts incorporating the significance of Christmas. And there is even greater excitement and enthusiasm among elderly churchgoers and youth groups at the village parish communities.

In the city, choral groups who belong to diverse creeds and denominations, and serve either the private or the public sector, for about a fortnight before Christmas Day begin to rehearse their international medley of popular Christmas carols. Theatrical pageants and choral concerts are held at college halls, auditoriums, or in open-air esplanades in church compounds. Streets and shops overflow with people buying beverages, cakes, clothing, gifts, shoes, electronic gadgets, and toys.

At country bazaars and village fairs, vendors from neighbouring districts hurriedly gather at makeshift stalls to sell a wide range of goods – especially farmer families who have just reaped and now want to sell their surplus stocks. Merchandise is opulently displayed to attract young village girls and children who come from the rural interior. Products on sale include colourful anklets, bangles, bracelets, brooches, clothing, fabrics, sarees, shawls, carpets, mats, and homemade delicacies such as marmalades, pickles, savouries, and sweetmeats, to household items of aluminium, pottery, furniture, and even delicately handcrafted jewellery with precious stones.

The festive cheer accompanying “Nattal” prevails until the New Year, permeating peace-loving people of all ages and classes with a sense of joy and goodwill. Even the mid-afternoon breeze, which is usually warm, at this time of the year becomes refreshing. Flowers of diverse hues, styles, and fragrances cover the surrounding alleys, boulevards, game parks, and treetops with grace as if to match the never-ending collections of manel, nelum and olu lying serenely upon ponds and lakes.

All of this enhances and enriches the natural beauty of the undulating tropical vegetation that extends from the coast to the hilly elevations planted with palm trees, rubber trees, and luscious tea plantations. The tea plantations, mainly located in the Central Province, made Ceylon Tea world-famous.

Out in the open expanse of rice paddy fields, male and female farmers chant verses to invoke the gods and praise nature’s rewards. Others, seated on mini stools in competitive teams of five or seven, join to play the popular game raban-pada (a traditional rendition of throbbing, rhythmic, prose, played together on a circular hollow drum). The stylistic and coordinated use of the players’ fingers and palms beating rhythmically together upon the hollow drum creates poetic prose.

PreviousChristmas in Mexico: A Multicolour Feast
NextThe Lesson and the Spirit of Christmas