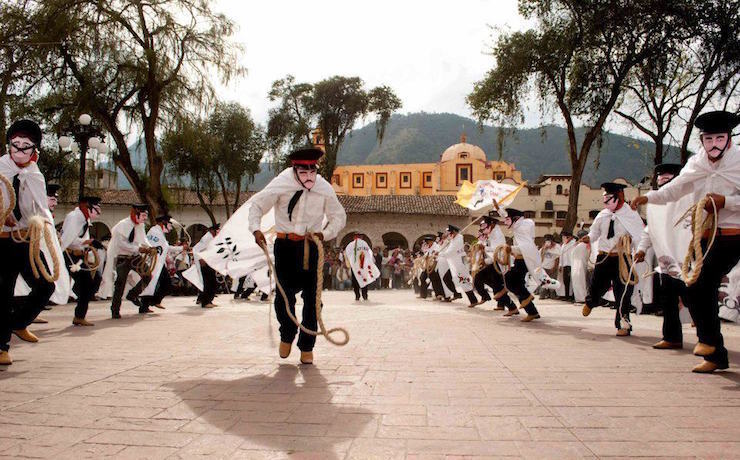 During the Carnival, a village in Mexico turns into an alternate reality – a magical world of masks and dancing.

The fog is the main character in Tetela de Ocampo, a village in the mountains of Puebla, East-Central Mexico. The streets, the bends in the roads, the landscape… all are made of fog. The inhabitants have become used to the ghosts and the nahuales, or “familiars”.

The people themselves are often beings who are both there and not there; figures that brush past each other but never see each other as they walk the streets; real but amorphous individuals. Every time the sun rises, the massive Mount Sotol is reborn, and the inhabitants celebrate that they can see each other.

The village of Tetela is a magical world. During the Carnival – the unreal world – all the differences and quarrels of the real world are resolved. The dance troupes, or cuadrillas, organised by the different neighbourhoods, begin rehearsing a month in advance. The members of each cuadrilla must forgive each other for anything that might need forgiving, if they are to dance in harmony.

During the time of the carnival every year, the villagers also liberate themselves by changing the way they use language: they say the opposite of what they mean. Men tell their wives: “Don’t serve me dinner. Get out of the house”. And the women correctly understand them to be saying, “Let’s eat together. I love you”. Parents order their children not to go to school, telling them: “I hope you fail.” And the children understand, “Go to school. Don’t stop studying.”

And so, left becomes right and right becomes left. Black is white and white is black. A boy professes his love for a girl by saying, “I have hated you for never”. She responds “I have never detested you”, and then they make plans for their divorce. Years become months, and months become days. Pesos are centavos. Milk is called beer, and bread is called meat.

The people’s skilful use of this “reverse language” is a kind of collective mask: by using language in this way, they can transform their lives even if they’re not wearing a physical mask. This tradition is a social game in which the meaning of words takes on a new suppleness and dimension. The rapidity, precision and naturalness with which the people of Tetela use this way of speaking is striking. The tradition may seem absurd to an outsider, but no one in the village thinks of it that way. People adopt this temporary change of language as part of their everyday life. They enjoy altering reality, even if in actual fact everything remains the same.

During this period, only the verses sung by the huehues, or elders, correspond to reality. The huehues wear dark pants and white shirts, with a sombrero or a military cap. They use simple masks made out of ayacahuite wood, carved to resemble the faces of French soldiers who were defeated in the nineteenth century. They also wear eye-catching capes, hand-embroidered with figures like peacocks and flamingos, accompanied by embroidered verses: “Hernán Cortes may have conquered the nation, but I will win its heart”. And so, between verses and snapping whips, the cuadrilla dance troupes wander the streets of different neighbourhoods, performing in exchange for food or liquor.

The fog, which masks everyone, descends early and hides the town. Mount Sotol disappears. The huehues take off their masks. No one can see them now, but they keep on dancing. All that is heard is their verses, and the violins accompanying them. Firecrackers as well as words escape from the dense fog, giving each neighbourhood a character, until the cuadrilla passes out of hearing range. The surefooted huehues walk through the foggy streets guided only by the labyrinth in their minds and the dexterity of their tongues, as real and as imaginary as they themselves are.

PreviousAnother Comboni Missionary Becomes a Bishop
NextPhilippines: Cardinal Tagle Calls for 10 Pesos a Day to Save 25,000 Children from Hunger