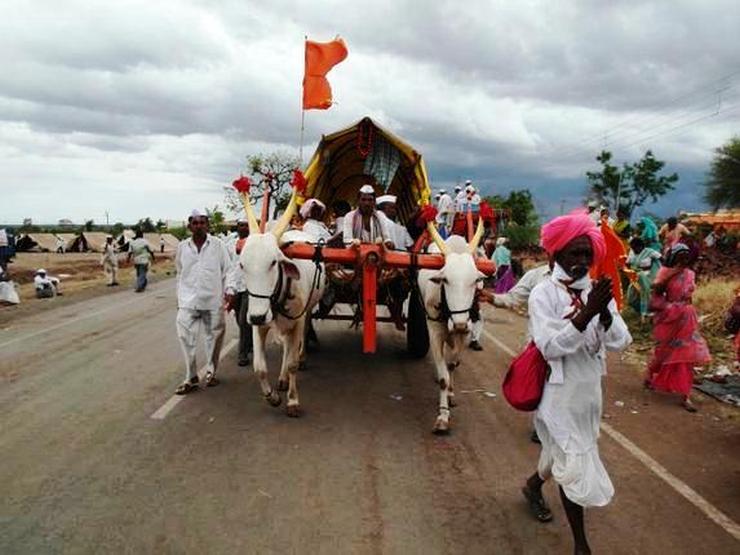 Singing praises and dancing, thousands of people have undertaken a pilgrimage to worship the Lord Vitthal, a Hindu God. A spiritual journey.

On the eleventh day of Aashaadh (in June/July), a multitude of devotees, having undertaken an arduous two-week journey on foot, descend on the temple town of Pandharpur in Maharashtra, in the western region of India. They have arrived for a glimpse of their Lord Vitthal, a manifestation of Vishnu, a Hindu god who is also worshipped in the states of Karnataka, Goa, Telangana, and Andhra Pradesh.

Those who undertake this centuries-old pilgrimage, known as wari, are known as warkaris. Singing praises and dancing to the rhythmic beat of cymbals and the mrudunga drum, the warkaris convene either in Dehu or Alandi, from where the procession, also known as palkhi, begins.

Sant Tukaram, a poet-saint, is said to have popularised the wari custom during the 1600s. He was a follower of Sant Dnyaneshwar, considered to be the spiritual guru of the warkaris, who at the age of 15 wrote a Marathi commentary on the Bhagavad Gita, thus making available the divine knowledge that previously only the Brahmin priests had been allowed to access. This, then, is the essence of wari: to break down norms surrounding caste and creed and open up worship to everyone.

The palkhi‘s timetable is well-defined and strictly followed. After worshipping the saint’s padukas (footwear) at dawn, the palkhi sets out at exactly six in the morning. A wind instrument known as a tutari is blown thrice to alert the warkaris. At the first signal, the warkaris get ready to leave; at the second, the dindis (groups of warkaris) take their positions in the queue for the palkhi procession; and at the third, the procession starts off. The dindis are given numbers according to their position ahead of, or behind, the palkhi. Each dindi is led by a flag-bearer carrying an orange-brown kav, or flag.

Cymbal players and the warkaris follow this flag-bearer in lines of four. The mrudunga and veena players are positioned in the middle and at the end of the dindi respectively. Then come the women warkaris, some carrying tulsi (basil) plants, and some carrying pitchers of drinking water on their heads. There are also a large number of warkaris not belonging to any dindi, who simply join the procession. These individuals are completely dependent on the residents of the villages for food and shelter along the way.

Each dindi has its own water tank and trucks to carry supplies. The management ensures that these tents are set up and meals prepared well before the dindis arrive. The dindis also decide the order in which the abhangas (devotional songs) are to be sung. Newly joined warkaris can be found reading the abhangas from books, even as they walk; and the days end with the singing of bhajans and abhangas. The warkaris are also treated to kirtans, discourses that combine narration and song – refreshing the mind after a long day’s walk.

After 18 to 21 days, the pilgrimage finally reaches the temple town of Pandharpur, where the warkaris take a holy bath in the river Chandrabhaga. Some fortunate ones get to worship the Lord Vitthal, while others just get a darshan (glimpse) of the temple spire – completing everyone’s spiritual and physical journey.

PreviousThe Catholic Church in Mauritania
NextBenin: The Gelede Masks, A Treasure of Tradition