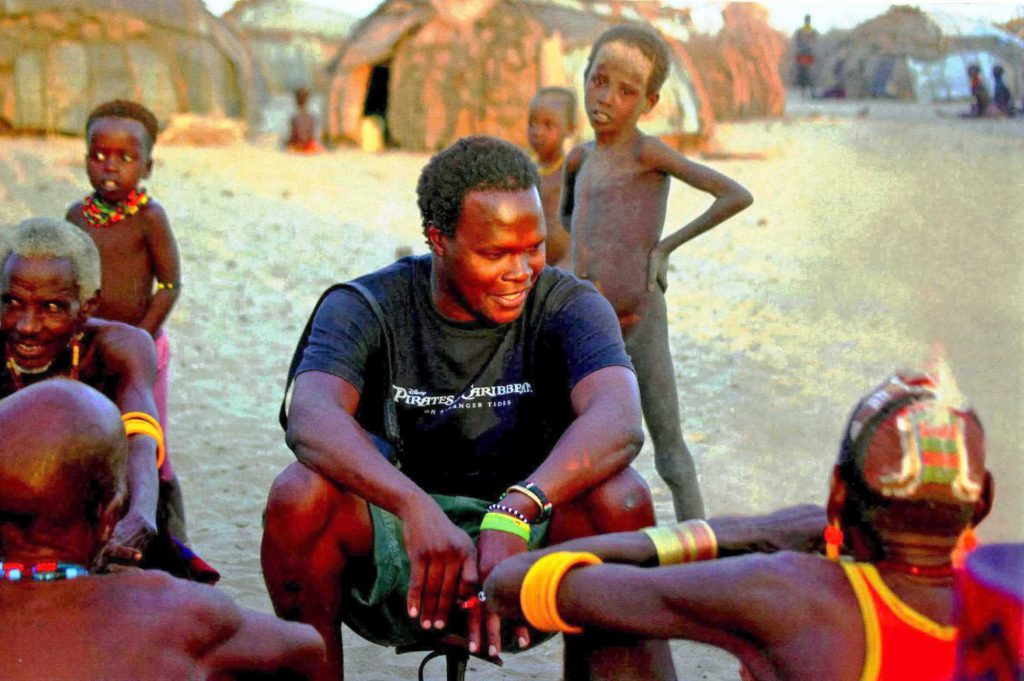 The Dassanech, are one of the oldest tribes in Africa, they live in three different east-African countries: Ethiopia, Sudan and Kenya. The Dassanech have been in conflict with the nomadic Turkana for generations. The tensions originates from disagreements about pasture, cattle and water. A missionary in the area is trying to mediate peace between the two groups, but the Ethiopian government has announced construction of a dam which could make the situation worse.

Niakidor, daughter of the Dassanech chief, is happy now: she feels at home among the friends in Father Steven Ochieng’s mission. At the beginning it was not easy for her to accept the new situation. She arrived at the mission almost without clothes, wearing just bracelets and a necklace. She was very shy and often kept herself aside from the other children who played happily together. She missed her family and her village. She felt like a stranger among the Turkana children, whose language she did not even understand. Then, one day, a Turkana girl gave her a T-shirt. It was the first step in building mutual trust, a sort of miracle, since the two ethnic groups have been fighting for generations. Cattle are often the cause of disputes.

Father Steven came to the region so Dassanech children could meet with their Turkana peers in an effort to reconcile the two tribes. There are 44 children in his missionary school in the village of Todonyang. Three of them are Dassanech. The children pray every evening “Lord, protect those who are worse off than us and help us to become an instrument of peace”.

Niakidor’s parents wanted to give her a chance to study. So, when Father Steven arrived at Sies for peace talks with the Dassanech, the chief of the tribe and his wife Choro gave him the custody of their child. The priest took her to his mission, ‘Mary, Queen of Peace’, beyond the border, in Todonyang, on the west shore of Lake Turkana. “Many people thought I was crazy”, said the missionary. “Living here is dangerous, but the Kenyan authorities approve the presence of the Church on the border with Ethiopia. They hope missionaries can help reconcile nomadic tribes”. Two Ethiopian MPs have recently come to meet Father Steven. They hope the priests will contribute to peaceful relationships among the neighbouring groups.

Father Steven lives in the Luo community, the third largest community in Kenya who reside in the western part of the country around Lake Victoria. The missionary is as a result very familiar with this land and its inhabitants and therefore, the ideal person to mediate and try to put an end to bloody fights among neighbours. “Turkana and Dassanech children share the same classes, we want them to learn to live together peacefully”, the missionary explains, “Children learn more easily how to live together in harmony, adults are more difficult to persuade”.

The Dassanech, a community of about 30,000 live concentrated in the Lower Omo River Valley. They no longer fight with spears and javelins, now they have smuggled Kalashnikovs from Somalia. Police on the border are powerless to stop weapon trafficking. Agents in charge of stopping the smuggling are frequently attacked. “The Dassanech are not supposed to graze their cattle on pasture in the lands beyond the border anymore”, says Father Steven. “However, they do not seem to accept the new rules – historically they were able to graze their cattle without paying attention to the borders of the state and as a result are accustomed to this way of life”.

Father Steven is, currently, the only one who is allowed to cross the border between Kenya and Ethiopia without a passport. When he crosses the border to reach the Dassanech’s territories, the police recognize him and say ‘hello’. “On my way back”, says the missionary, “I always stop to talk a little while with them and invite them to attend the mass at our mission. They are happy about our presence here”. The conflict between the two groups has resulted in hundreds of deaths. In addition there are many others who have died as a consequence of drought. But Father Steven does not give up easily. He buries the dead of both sides and takes care of the injured people in the mission hospital. “I have the chance to have a talk with both groups. They trust me and I consider it a privilege, but still challenges are tough”, he says. “I need more nurses, teachers and collaborators. But, where can I find people willing to live in a region where temperatures exceed 40 degrees?”.

Tensions between the two communities have been mounting, partly due to the ambitious Ethiopian Government project: the construction of two dams on the Omo river. About 200 kilometers north of Lake Turkana, the giant wall overtopping the Gilgel Gibbe III dam looks like a constant threat to the nomads. The Ethiopian Government wants to improve electricity production to meet the domestic needs and sell the excess power abroad. Environmentalists however warn of potential ecological disasters. The Omo river is in fact the largest tributary of Lake Turkana, and the water level in the basin decreases considerably during the dry season. Father Steven is particularly concerned for the nomads. “We stand in solidarity with those who are forced to leave their pastures”, he says, “we are in a difficult situation ourselves. Our presence here hampers the multinational corporations’ interests”.

PreviousPhilippines. Fighting together
NextMalawi: Gule Wamkulu – Dance of the Spirits