Nicaragua: The Art of Pneumatic Tyres 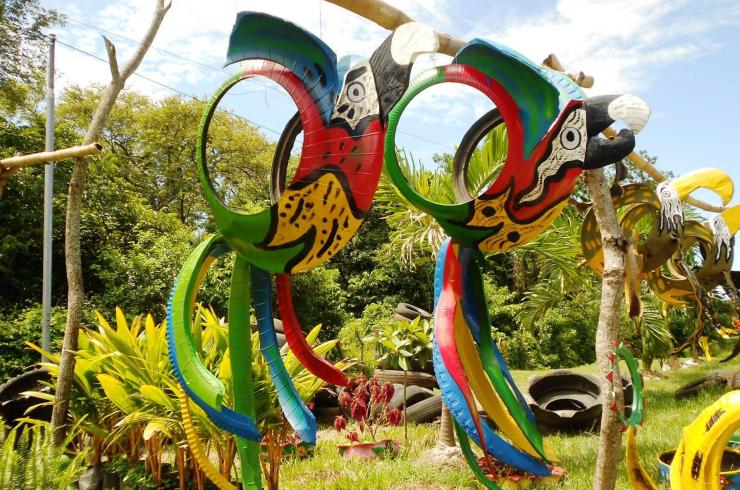 His hands run fast over the grooves of a scrap tyre. He uses a heated knife to cut the rubber to be modelled. The motif is not a designed pattern, but it is inspired by shapes and colours drawn from his imagination. Slowly images, the faces of animals and geometric motifs, take shape.

Francisco Josué Moreno is 19 years old. He carries on working, without even lifting his head up to see who has arrived. He is concentrated on a tyre. He wants to give it a shape — imbue it with meaning. Outside, one can hear the din of trucks and cars running fast along the road that connects Managua to Masaya.

As he sees us looking, Francisco shows us his work. “It’s the art of making beautiful things out of scraps,” he says, smiling. Bird-shaped vase holders, chairs, stools, flower vases — all made out of scrap tyres.

“It’s been less than a year since I started,” he says. “I had just finished attending a technical school where I learned to draw and model. I had no idea what I wanted to do. I like plants and gardens, so I started to work in a garden centre. My biggest wish had always been to do something creative and original.”

“One day I went to visit my aunt in Granada. Her house is close to a landfill. While I was there I noticed many people hanging around piles of waste. The smell was unbearable. The large amount of stuff struck me. All of a sudden I started to picture a vase out of a broken bottle, some geometric figures out of metals, some decorations obtained from cans. But what caught my attention the most was an old tyre. It was as if it was calling me. I got closer and touched it; the rubber had got rather soft because it was hot. I was able to make the most weird shapes by pressing the rubber. My hand got black. I had already started to walk back home; when I turned to watch that old tyre once again, I felt as if it wanted to send me a message”.

When Francisco came back home, he told his aunt about the idea he got after he had seen all those scraps at the landfill. His aunt encouraged him to realise his project, and offered that he could stay at her house. She also put some space in the house at Francisco’s disposal, to store the stuff he collected at the landfill.

“That’s how I started,” Francisco says. “I collected old tyres and tried to reshape them. I made elegant and beautiful (in my opinion, of course!) figures out of the rubber.” Then Francisco tried to sell his handicrafts at one of the most famous artisan markets in Nicaragua, the Masaya Market. Masaya is not only a popular artisan centre but also a breeding ground for creative people. Francisco immediately realised that his original and innovative handicrafts were appreciated. He was soon able to sell his first works: some bird-shaped vase holders.

He finally decided to open his own shop with annexed workshop along the road. Many drivers stop by Francisco’s shop to have a look at his original works.

“The funny thing is that I do not need to buy tyres. People give them to me for free. One day a truck driver from Honduras stopped by and told me he intended to give me some old pneumatic tyres, because he thought it was important to recycle them. He also said that, after so many kilometres, old tyres deserve the right to rest in a garden and look beautiful, colourful, and elegant.”

Francisco, in his own way, is an environmentalist. “I recycle to protect the environment. I recycle tyres, but not only those. There are plenty of things in the landfill, which is my main source of inspiration”, he says.

Francisco’s creativity has no limits. “I did it all by myself without any support from the government or corporations. I am convinced that if one has creativity, imagination, and a sense of beauty, one can give meaning to one’s life and get out of poverty”. Francisco is still a very young man, and mentioning his friends, he says, “Many of them join gangs and take drugs. I am not interested in these sort of things. I want to continue to live and grow up and develop my art. I do not demand much. I just want to become a more skilled ‘pneumatic tyre artist.'”

PreviousMining in Colombia: A Social Disaster
NextTaneka, Benin: Walking Together for the Future