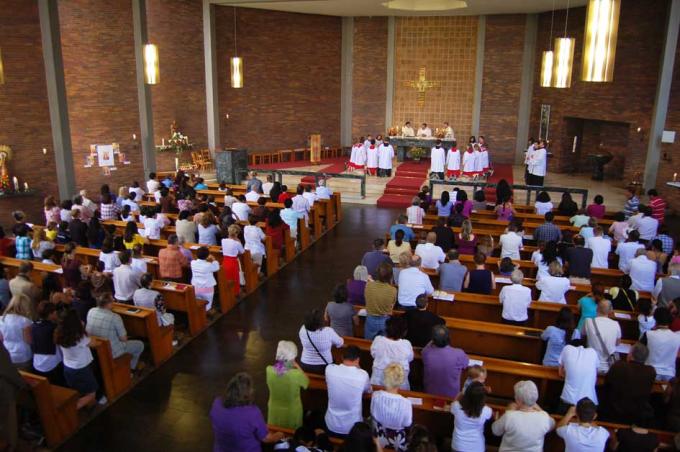 Political and economic inequality, narco-trafficking and violence: the Church tackles some of these challenges facing the Dominican Republic by organising people using a Pastoral Plan. Father Lorenzo Vargas, the Archdiocese of Santo Domingo’s Vicar general, talks about the pastoral work of the Church.

Visitors to the country will see big avenues, high buildings, beautiful houses. The city of Santo Domingo looks like a western metropolis. But data shows that the distribution of wealth is unequal, and that 40 percent of the population live on the edge of poverty. The country’s great economic inequalities also represent political and cultural disparities, which seriously affect people’s lives. The high cost of living and unemployment are among the negative consequences of this situation.

Dominicans are merry and responsive people, with a great love for freedom, as their history shows. Children and teenagers make up the majority of the population, so there is a real interest in education as young people wish to improve themselves. Tourism has become the main source of income for the country, which relies heavily on its several natural resources.

Family values are extremely important among the Dominicans: being close with one’s family is a characteristic element of Dominican society. This also explains why the money sent to families by those who emigrated abroad represents the country’s second-biggest income source. Much like other countries in Latin America, the Dominican Republic is affected by the scourge of drug trafficking. At first, the country was only used as a transit area for drugs coming in from other Latin-American countries, where drug cultivation and manufacture are a big business. But gradually, the drug business has become a serious internal problem which has affected Dominican society. The proliferation of micro drug-trafficking has generated violence, delinquency, and insecurity among the people, who are often frightened of walking in the street.

Studies carried out by the Church into the failure to address these challenges of Dominican society have identified three social causes: disorganisation, lack of connection, and lack of definition. The disorganised urban transportation system is one example of this. Laws are in place and police exist to enforce them, but in reality, everything is done ‘the Dominican way’ – in a way that hampers the development of the country. Clientelism and corruption are two factors that additionally contribute to social and economic inequality.

The Church is seeking solutions by carrying out a National Pastoral Plan, which involves the country’s 11 dioceses. The long-term project is aimed at improving organisation and developing connections and communication within the Church itself, in order to help the Dominican people work together to better face shared problems.

The Church wants to be a missionary and evangelising Church, as well as a guide and support mechanism for people who have to face challenges in their everyday life.

The Church also collaborates with social movements to promote and demand improvements in the country, for example allocating 4 percent of the national budget to the education sector. Recently the Church and some environmental movements have worked together to protect Loma Miranda, a nature reserve, from exploitation by a mining company. The archdiocese of Santo Domingo led the movement of opposition to the project and eventually achieved the goal of stopping it.

The Church contributes to community organisation by training small ecclesial communities, thereby creating spaces for Christian initiation, which imply a commitment to real life. All these initiatives give us hope for the future of the country, through the establishment of a network of popular participation and solidarity that will help to solve the problems that affect the majority of the population.