Egypt: The Hidden Charm of Graves 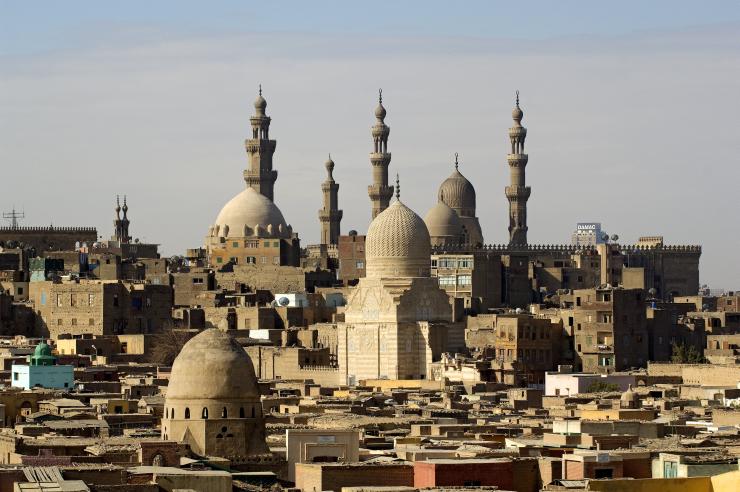 The City of the Dead, known also simply as Al-Qarafa (The Cemetery), is what the inhabitants of Cairo call this extreme place on the border between the countryside and the city, between the living and the dead. It is the largest cemetery in Egypt and home to hundreds of thousands of ‘souls in the flesh’.

The Islamic cemetery in Cairo, constructed after the Muslim conquest of Egypt in 642 AD, is the oldest in the country and is still in use today. Since the middle of the last century, an increasing number of people have settled there. Due to the difficulty of finding affordable housing and the relentless growth of the urban population, the capital city now has more than nine million inhabitants. People have built houses and set up offices for small-scale economic activity in this place.

The cemetery, which stretches across more than ten kilometres on the eastern outskirts of Cairo — at the foot of the Moqattam hills, behind the eight-lane urban highway of the Egyptian metropolis — is commonly called the City of the Dead. Tourists often find themselves very close to this place without being aware of it; the City of the Dead is right next to the Al-Azhar Mosque and Khanal-Khalili bazaar, two popular destinations for tourist groups.

Sometimes, some intrepid tourists leave the souvenir stalls to look around the cemetery. It is home to some of Cairo’s most beautiful mausoleums and places of worship, commissioned by the Sultans and Emirs who ruled the city centuries ago — such as the Mosque of Sultan Qaitbey, dating from 1474, which is considered one of the most outstanding examples of Islamic architecture in Cairo.

The hidden charm of this place lies in the life pulsing among the graves. The vast necropolis is inhabited by many of the city’s poor and homeless people, who find a makeshift shelter in the funerary constructions.

Ali, a carpenter, says: “We have lived here for twenty years now. Earlier we lived in the centre of Cairo, but the house rent was too expensive and the traffic was unbearable. Children grow up well and safe here”. He is the father of four children, who were all born in this place. Many of those who inhabit the City of the Dead share Ali’s opinion.

In the past century, because of Egypt’s housing crisis — a lack of satisfactory and affordable housing for a rapidly growing population, and the failure of social housing policy — many poor Egyptians have made tomb rooms, and some small buildings originally built to host pilgrims and security guards, their permanent homes. According to some academics, however, this is not a new phenomenon: the graves of the cemetery were already being used as shelters as long ago as the 14th century.

Traditional funerary constructions included some small buildings, which were used as shelters by distant relatives when they came to visit their dead for several days. Even the humblest graves were designed with a room where pilgrims could spend the night. Those, however, were just temporary shelters; used for the sole purpose of hosting visitors who were there to honour the dead. Today, the cemetery is permanently inhabited. Some people live in their family graves, near the remains of their ancestors; others have illegally occupied abandoned graves or have managed to secure graves which do not seem to belong to anybody, through special procedures handled by the local undertakers.

The Egyptian authorities prefer not to interfere with the management of the cemetery. They just provide the population of Al-Qarafa with basic services such as water, electricity, schools and sewers. There is even a small police station and a post office in the necropolis. The inhabitants of the City of the Dead are estimated to number between half a million and a million; the data varies. The population living among the graves and the inexorable process of urbanisation has altered the features of this place. An occasional visitor would not realise that he is in a cemetery: alongside the graves, one can see craft stores and stalls, just like in any other working-class district in Cairo.

Inside the cemetery, one can see the lines that women use to hang clothes up to dry, dangling from the walls of the mausoleums. Battered cars, motorbikes, and carts pulled by donkeys circulate in the sandy streets around the graves. Children play among the tombs, almost unaware of those who rest there. The cemetery lost its aura of sanctity a long time ago. One can smell the aroma of spices used to season lamb and couscous coming from ovens. Despite all this, one can still feel the religious sense of peace there.

“We cannot complain, our neighbours are all very quiet,” Ali jokes.

Between Thursday afternoons and Friday evenings, many people arrive at the City of the Dead. During this time of the week, the spirits of the dead come back to visit the world of the living, according to the local tradition. Whole families go to the cemetery to honour the dead, and then eat their packed lunches and hold merry gatherings among the tombs.

PreviousA Comboni Missionary is the new Bishop of Tarma, Peru
NextThe Maasai in Tanzania: “They are asleep”