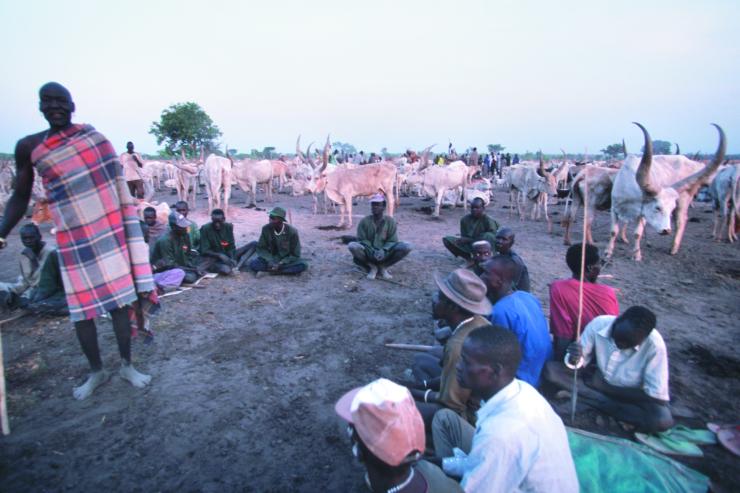 The Dinka people are the largest ethnic group in South Sudan. They live mostly in the Bahr el Ghazal region of the Nile basin, Jonglei and parts of southern Kordufan and Upper Nile regions. They are mainly agri-pastoral people. The conflict-reconciliation resolution is an important event in Dinka society.

The first one is called Tir which means blood feud, an unparalleled violence between two groups or clans with revenge which has been ongoing for decades. Once a conflict has erupted, mediators will try to stop the fight. Usually, they are elders who will be respected and obeyed. Procedures towards peace making will not start immediately, as time will be given for the wounds of those affected to heal. The purpose of this is double-sided; on one side, it provides time for people to cool down, and on the other side, it is to estimate the extent of the injuries, in order to fix the fine. If the person is dead and therefore the cost of the conflict is considerable, both groups will avoid any type of relationship until a cleansing ceremony is performed. The elders will take the initiative towards a sound resolution of the conflict. They will consult among themselves and send a messenger to the opposite group to ask for reconciliation. When there is a positive response, the two sides will come together to negotiate peace. The need for reconciliation also arises from a spiritual perspective. Conflict is not the normal state of life, but peace and harmony.

The second cycle is luk. The word ‘luk’ has two meanings: as a verb it means to persuade; as a noun it means ‘court’ or ‘trial’. The court is chaired by a chief or judge, beny luk, who is supposed to emphasise persuasion rather than coercion.

The third one is Apuk. It is the payment of a fine in form of cattle to the relatives of the victim, as compensation for their loss. The main reason of ‘Apuk’ is to make people happy, as far as possible. It also has an important role within the spiritual world, to appease God’s anger for the shedding of blood and thus, avoid punishment. When a final settlement is agreed upon in cases of murder, a ceremony of reconciliation (acuil) follows and the case is then fully resolved and harmony restored.

Finally, this fourth cycle is called ‘Acuil‘. An important characteristic of the Acuil is the sacrifice of a white bull. Water is also an important element as symbol of purification. Each group will come along with two bulls, Mabor (white) and Malual (red) symbolising peace and blood and the elders summon the communities to not fight again. Then, both groups make a firm resolution to abide by the peace-agreement. The four bulls are slaughtered from head to tail and split equally. These eight pieces of meat are exchanged between the two groups in dispute. The meat of the red bull is roasted and eaten when the ceremony is taking place, while the meat of the white bull is taken back to the community, symbolising that peace goes home. “The people are put together as a bull is put together”, said a Dinka chief.

Reconciliation rituals are not just friendly pacts to make peace. Instead, they are truly transformative events. What is recreated in the ritual affects the whole cosmos: the living, the living dead, the not-yet born, the ancestors, nature and the spiritual world. Rituals become operative only to those who share a common world view. In other words, an outsider will probably not understand nor be influenced by the ritual because their perception of the experienced reality differs. Dinka rituals are performances – they connect the physical with the spiritual world and canalise strong human feelings of anger and fear. Dinka reconciliation is first and foremost a community event, as conflict is also understood as a communal affair.

The positive moral element is the fact that the Dinka feels responsible for what a member of the family does. When the reconciliation becomes a community event there is time for introspection. The social dimension of reconciliation is also seen in the effort towards the re-insertion of the offender.

In Dinka society the search for truth is not absolute, but is the service of harmony. Therefore, it is acceptable to distort the truth for the sake of harmony.

It seems that the Dinka have a different concept of guilt, which is spiritual and thus somehow irrelevant. Guilt can be a very healthy feeling when it encourages the person to seek conversion through reconciliation. The acknowledgement of sinfulness is an opportunity to accept others’ sinfulness. It is surprising that through the different rituals of reconciliation, we may note that the idea of forgiveness is not apparent.

Forgiveness has a personal dimension that is not always catered for during the reconciliation. Forgiveness is not something one can acquire through the payment of compensation, it goes far beyond that. In clear contrast with forgiveness, is revenge. For the Dinka revenge is not just an event, but an institution sanctioned by deep cultural traditions. Revenge is often wanted by the spirit of the deceased. It is a command that can hardly be silenced under the fear of punishment or curse.