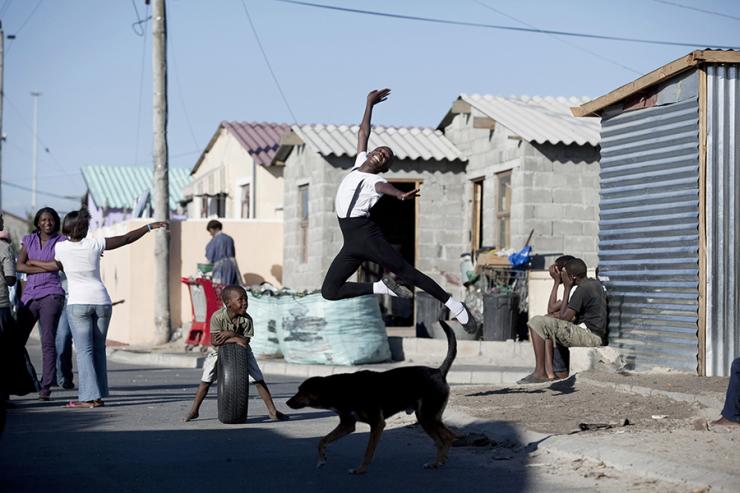 From the dusty streets of the townships to dance theatres. The dream of many girls and boys.

It is Saturday and the sun is setting on the shacks of Khayelitsha, a suburb on the outskirts of Cape Town. Sikhumbuzo Haleni is exhausted; he has just got off the bus and is walking home, his legs feeling heavy. The journey is an hour there and another hour back to attend the ballet classes at the Cape Town City Ballet. Sikhumbuzo Haleni comes from a poor family and lives with his mother and his two younger  sisters. Only 15, he dreams of becoming a professional dancer, performing in the big theatres of South Africa and the rest of the world. This is why every day he trains under his sisters’ fascinated gaze.

There are many boys and girls in South Africa who, like Sikhumbuzo, dream of a ‘future on tiptoes’. Former ballet dancer Philip Boyd, 60, who was a principal dancer with the now Cape Town City Ballet, realised how important the discipline of dance could be in the lives of the young people living in the townships of Khayelitsha, Gugulethu and Langa. Therefore, in 1991 he established the Ballet for All, a non-profit organisation that gets children from previously underprivileged backgrounds involved in dancing. The name changed to ‘Dance for All’ (DFA) after the organisation started incorporating other disciplines of dance such as African, jazz, contemporary dance and hip hop.

Today, DFA trains more than 400 children and young adults in its five ballrooms scattered throughout the several townships around Cape Town. “Many of these kids are orphans” says Philip Boyd, “some others’ parents are in prison or are unemployed, most of them come from underprivileged communities. Forty percent of the inhabitants of townships are unemployed, and the children live among insecurity, alcoholism, drugs, violence and crime. Our aim is not to make them become famous but to help them bring order into their lives through the discipline of dance, enabling them to bring out the best in themselves and achieve goals they never thought they would achieve”.

Over the past 15 years, Philip Boyd, through DFA, has saved hundreds of young people from gangs by taking them off the streets. “Our dance schools go beyond the teaching of dance.”, continues Boyd, “We focus on the teaching of life, on the meaning of living together. South Africa experienced so much pain during Apartheid, so we teach our young pupils to build our country up.”

Lwando, 16 years old, started to attend the dance school four years ago. He says: “At first it was not easy. My friends laughed at me and said that dance is just for girls. My family, as well, could not see the point in undertaking this discipline. They said it would have been better to do something more proper for a man. But I did not let anybody influence my decision, and since I discovered the joy of movement, my life has changed”. Rose Mary is only 8 years old and attends the DFA ballet classes along with her older sister Amandla. She is really willing to learn to dance. She promised her mother, who died of AIDs a few months ago, that she would dance for her.

Penelope Thloloe was the first black student at South Africa’s National Arts School of Johannesburg. Today, she is one of ten professional dancers of the Ballet Theatre African Dance Academy. She travels around the world and performs on the most prestigious of stages, but anytime she returns to South Africa, she always goes back to visit the places where she grew up. In her spare time she teaches dance to kids in Alexandra, Johannesburg’s historic black township. “What I mainly teach is being deeply committed to what you are doing. Sacrifice, in fact, is the basis of any personal success.”

Her colleague Kitty Phetla, dancer and teacher at the Johannesburg Ballet, gives free lessons to young students of Soweto. “The first thing I teach my young pupils is believing in themselves and overcoming their fears. Everyone can leave behind the difficult reality of where they were born”, she says at the end of a performance at the Shalomanne Primary School. Many students, encouraged by the examples of Penelope and Kitty, begin to attend dance classes in schools such as the Dance Factory, which for fifteen years has been a point of reference for the young people growing up in the suburbs of Johannesburg. The  most talented of them will then perform at the South African Mzansi Ballet Academy, the most prestigious dance academy in the country. Those who pass the auditions will have a future in the industry, but only one out of a thousand succeeds. “It is worth trying” – says Dada Masilo, a dancer and choreographer who grew up in the shacks of Soweto and performs in the theatres of London, New York and Moscow. “It is not the most important thing however. What really matters is rising on your toes and trying your best to take flight…”.