Charles de Foucauld: The Spirit of the Desert 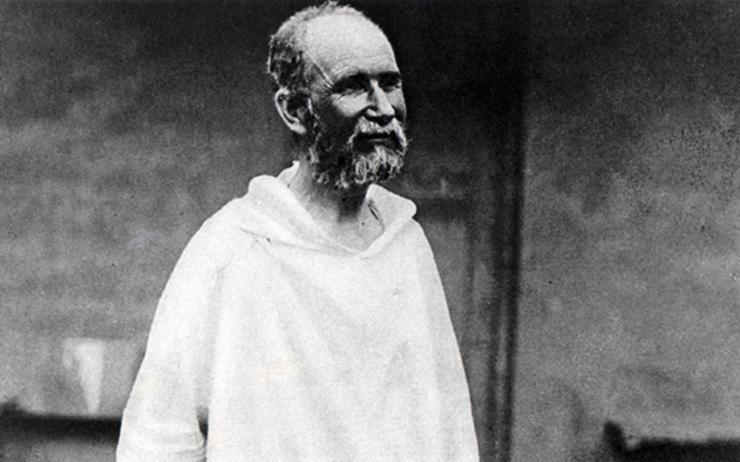 This year, the church commemorates the centenary of the death of Charles de Foucauld. His life and his message of brotherhood and friendship among the Tuareg, is a legacy for our times.

On the evening of the 1st December 1916, Brother Charles was taken hostage by a group of rebels who were active the area in the Hoggar (Central Sahara) oasis of Tamanrasset.  In a moment of panic, one of the rebels shot him at point blank range. Brother Charles died on the spot. Two weeks after his death, Moussa Ag Amastane, the Tuareg chief who had become Brother Charles’ friend, wrote to his sister: ‘Charles the Marabout has not died only for you. He has also died for us all. May God grant him mercy, and may we all be together with him in Paradise’.

Charles de Foucauld was born on the 15th September 1858 in Strasbourg in the province of Alsace, on the border between France and Germany. The Foucauld family, rich and aristocratic, had a long-standing military tradition. By six years old, he had lost Mother and Father. During his difficult adolescent years, he lost his faith. He was made an army officer at 22 years of age and was sent to serve in Algeria. He was thrilled by the discovery of new horizons. Three years later he left the army and undertook a risky exploration of Morocco. Several times during his expedition he was offered protection and hospitality by highly religious Muslims. These were to become his friends. Having returned to France, he was deeply touched by the respectful and warm welcome which was extended to him by his family, especially his cousin, Marie de Bondy. This is where his search for meaning began. Providence led him to meet Abbe Huvelin, a priest who would prove to be both a father and a friend to him.

In October 1886, at 28 years of age, he underwent his conversion. In this way, he discovered in God a gentle father who was infinitely close and had never ceased to wait for his child. His existence was entirely transformed and he spent the rest of his life searching for how he could respond to God’s boundless love. A pilgrimage to the Holy Land revealed to him the person of Jesus of Nazareth, Son of God, who shared our humanity and chose to lead the obscure existence of a village carpenter for 30 years. He perceived in this poverty and humility, a calling which was addressed to him. He wrote: ‘I greatly long to finally lead that kind of life which I caught a glimpse of while walking the streets of Nazareth.. streets which had earlier been trod by the feet of Our Lord, himself a poor carpenter, who lived in obscurity and abjection’.

Life In The Monastery

Charles had found his direction, but the journey would be long and difficult. He spent his first 7 years as a Trappist monk and then a further 4 years as a hermit in Nazareth, where he lived beside a Poor Clare monastery. These years were marked by both prayer and silence.

Day and night he spent long hours in adoration before the Blessed Sacrament. He also spent long hours meditating the Gospel, saturating himself with Jesus’ words and deeds, so that they might change his heart. It was like the steady drop of water which ends up hollowing out even the hardest rock.

He left Nazareth for good in August 1900, and spent several months in the Abbey of Notre Dame des Neiges (Our Lady of the Snows), in order to prepare himself for the priesthood. Ordained on the 9th June 1901 by the Bishop of Viviers, he set off for Algeria a few months later and settled down in an oasis of the Sahara desert called Beni Abbes, near the Moroccan border. This time he didn’t build a hermitage, but a fraternity, and after three years of being in Beni Abbes, Brother Charles heard about the Tuaregs. They were a poor group of people, who lived in a place that was so remote that it was difficult to reach them. In 1904, some friends, who were officers, offered him an opportunity to travel with them in order to meet them and so once again, he took to the road. He spent more than three months trekking through the desert in order to arrive at the Hoggar mountains where little nomadic groups of Tuaregs roamed.

Right from the very beginning he felt an inner urge to make his home among them. But these tribes were deeply wary of their French occupants and it would be a year before their leader, Moussa Ag Amastane, gave permission for Brother Charles to settle down in Tamanrasset. Alone and defenceless, he trusted their offer of hospitality and within a few days built himself a rough little earthen house which he made his dwelling. He immediately began a passionate study of their language and showed a keen interest in their culture. He transcribed hundreds of poems which were sung around the evening campfire. Having been transmitted from generation to generation, these poems were in a certain sense the instrument that best expressed the soul of the Tuareg tribes. Brother Charles carried in his heart an immense desire to speak to them of Jesus and the Gospel, but he quickly became aware of the fact that the time was not yet ripe for that. And so it was simply by means of the patient labour of friendship that he undertook, to tell them about who his God was.

In 1909 he wrote, ‘I want to be so good that people will say, ‘If this is what the servant is like, what must the master be? To say, a house that was to be open to all those who came, regardless of their nationality, race or religion.‘ He wrote: ‘I want all the people here, be they Christian, Muslim, Jewish or whatever religion, to see me as their brother, a universal brother. They have started calling my house the ‘fraternity’ and that gives me pleasure’.

The First World War broke out in 1914 and violence spread as far as even the remote solitude of the Hoggar. There was a widespread rebellion on the part of many tribes against the French occupation and insecurity grew. Brother Charles was aware of being in an increasingly dangerous environment. He was offered shelter in a French military post but refused. He couldn’t bring himself to abandon those who had extended their hospitality to him for over ten years. Friendship and mutual trust had taken root over the years and he felt bound to the Tuareg people by a deep human solidarity. Ever since being captivated by Jesus of Nazareth, he had sought to follow in his footsteps, living in imitation of him. He deeply wanted to become like him in his passion and death, in order to give proof of the greatest love.

One night in December 1916, he was assassinated. He knew the risk, but he decided to remain to the end amongst his friends.

Though he had a desire to have followers, Brother Charles did not start a congregation. However, his death did influence many people around the world. Brother Rene Vollaume, the founder of the Little Brothers in 1933 and Sister Magdalene, the founder of the Little Sisters of Jesus in 1939 in Algeria, followed in the footsteps of Charles de Foucauld. Many spiritual families also developed, inspired by the spirituality of Brother Charles de Foucauld.

PreviousGuatemala: Quetzal, ‘God of the Air’
NextIndia: The Healing Path Of Yoga