Comboni Missionaries: “Africa is our home” 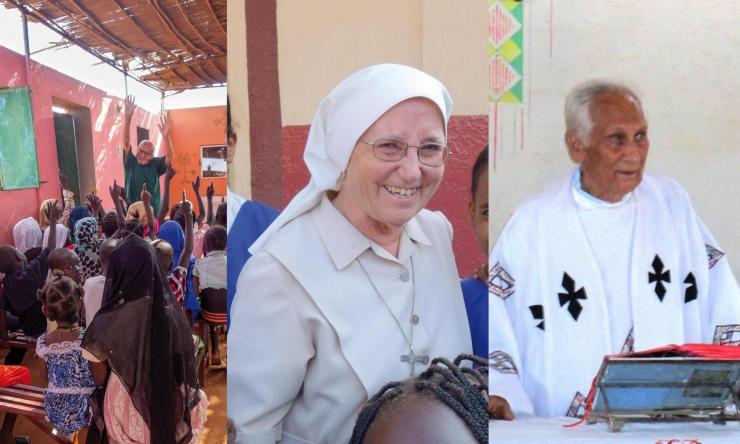 A total of one hundred and thirty years those three Comboni missionaries spent in Africa. Three devoted people of great faith and love for the people. Their motto was: ‘This is our home and here we will remain as long as there is life in our bodies.’

Comboni Father David Ferraboschi is originally from Italy but has spent some 50 years in Sudan as a missionary. Only forced exile lasting for four years could separate him from Sudan. “When I first arrived in Sudan, there were about sixty of us Comboni missionaries in the country but today we are less than twenty. The mission continues, nonetheless.”

At the age of 79, Father David is still “on the front line” working in the parish of Masalma, in Omdurman. Founded in 1889, it is the oldest current community of Comboni Missionaries in Sudan. However, Father David’s first mission was among the Nuba, in El Obeid and Kaduqli – North Kordofan and South Kordofan, respectively.

“There I learned to love this quiet, simple, life-loving and extremely welcoming people. In Masalma, most of the Christians are Nuba who came to escape from the endless conflict that their region suffers. I love this parish. This is where the Comboni Missionaries Sr. Teresa Grigolini and Fr. Josef Ohrwalder, along with other missionaries, were forced to remain as prisoners during the Islamic rebellion at the end of the 19th century. They had a kind of secret chapel where they prayed unknown to anyone, taking a great risk. That is why we wanted to open the parish.”

In 1990, Fr. David’s visa was not renewed since the Khartoum government wanted to reduce the Catholic presence in the country. Fr. David left for Egypt with the hope of soon returning to Sudan. But as the permission did not arrive, he returned to Italy to study at the Pontifical Institute for Arab and Islamic Studies. It was a time to improve his knowledge of Arabic and to study in depth the Qur’an and the Muslim religion. He was only able to return in 1994. He was in Nyala (Darfur) for five years, and again in El Obeid, with the Nuba, for another eight years, before ending up, in 2005, in the parish of Masalma.

His face lights up when he talks about his life there. “I am having a beautiful missionary life. I see that faith in Jesus helps many people to move forward, it stimulates them to overcome the differences between the communities because they feel they are members of a larger group”. He talks to people and never seems to be in a hurry. “Once you get into people’s reality and free yourself from prejudices, everything is easier. It cost me a lot. At first, I was a victim of that desire for people to do what we do and the way we do it. And it is not like that. They have their way of seeing things, their vision, and it is undoubtedly they who are the protagonists and must manage the mission.”

Last March, Sister Conchita Lopez, a Comboni Sister, received from the Spanish Government, through its Ministry of Foreign Affairs, the cross of the Royal Order of Isabel la Católica for her commitment on behalf of poor people around the world.

Sr. Conchita Lopez was born in Toledo, (Spain) 75 years ago. Sudan is also her mission land, which she only left to care for her elderly mother for a few years. She felt a very strong missionary call at the age of 12 and it followed her faithfully despite stiff opposition from her family. “I had to flee from home to start my formation with the Comboni Missionaries and only little by little, and after much suffering, my family ended up accepting my vocation, and was even happy about it.”

“I arrived in Sudan on December 3, 1975. The first years were lived in Omdurman and Atbara, studying Arabic and assimilating the cultural values of the country. Later, the roads of the mission would take me to present-day southern Sudan. I spent six years in Juba and then a long period in Malaka and it was always the same: war, war and more war. The bombs were falling everywhere, but at the same time God’s grace was so strong that it renewed us and gave us strength to continue with the people.”

Sr. Conchita continues: “At that time, all humanitarian organizations had left and people looked at us and asked us: `Are you going too?’ I do not know where we got the strength to say: No, the good shepherd does not abandon his sheep so we will stay”. The superiors in Rome asked the sisters to leave the mission, and the United States embassy offered them a flight to leave Malaka, but they did not leave. “We chose ourselves. We did not pray about it and the superior said: ‘You see what they tell us from Rome’, and there was a silence. Suddenly a sister said: ‘I’m staying’; then another: ‘I want to stay as well,’ and so the six of us stayed there. We felt that it was not the time to abandon those people who needed us and we really created a wonderful fraternity with the people. It was a joy for them to see us there and with their enormous faith they encouraged us: ‘Don’t worry sister, God is with us’. We came to evangelize and we were evangelized.”

In 1996, Conchita returned to Spain to care for her mother. She returned to Sudan in 2004, where she spent four years in Khartoum until, in 2008, she was assigned to her current community in El Obeid. “I have always lived the mission with the joy of being among the poorest. I have been accompanying two communities in Rahad and Umruwaba, near El Obeid, for 12 years with people living in tremendous misery. Most of them are Nubas, but there are also other small groups from different communities. I go there and visit families, including the Muslim ones. I talk with some of them and try to help others in whatever way I can. I try to make sure the children go to school and receive an education. That is my mission.”

Sr. Conchita remembers the names of various people she has encountered. One of them is Riad, whom she baptized as he was in danger of death. He died a few hours later. “It was something very emotional. There were all those people praying on their knees next to Riad, in a small and very poor house, where they had only one dirty old mattress but a lot of faith.”

Father Alfredo Neres is Portuguese. He has spent more than 34 years in the Democratic Republic of Congo. “As soon as I arrived in the Congo, I took on the task of assisting the villages on the savannah where the most abandoned people live.  A whole year may go by without people being able to go to confession or assist at Mass. In all these years, I have always wanted to experience the joy of going to meet and visit our Christians in the savannah. I remember going to visit a chapel in Ango mission, 198 km from the centre, often pushing my loaded bicycle up the hills. My visits to those villages created a new atmosphere. I would proclaim the Word of God, hear confessions, celebrate Mass and spend days with the people. Sometimes I would stay in the forest for three weeks before returning to the parish tired and in need of a wash but with overflowing joy”, Father Alfredo recounts.

The missionary continues: “In my missionary work, I have always emphasised the work of evangelisation. The second strong point is the Eucharist, helping people to live deeply the Eucharist in their towns and villages. In third place, I consider the Sacrament of Reconciliation as fundamental as it shows the love of God through forgiveness and closeness.”

Father Alfredo recalls: “At first, there were not many priests in our dioceses in the Congo and the work involved especially the preparation of catechumens for baptism. Many baptisms and confirmations were administered to lead people to Christian maturity. When I was an episcopal vicar in Bondo, the Bishop charged me with erecting three new parishes in the diocese, each a long way from the other (Monga, Ango and Dakwa). I stayed for two months in each parish to ensure the conditions for their establishment.”

An event he experienced changed his life. “In December 1981, my priestly, religious and missionary life was turned upside down. While I was in Rome doing a course, I took part in a meeting of Charismatic renewal. During the prayer for the outpouring of the Spirit, I received a gift from the Holy Spirit, the gift of healing people’s diseases and liberating them.”

The missionary continues with his memories of his missionary life. “The most impressive memories concern the seven years (from 1996 to 2003) of war he spent at Ango and Bondo. When the soldiers of Mobutu, on the one hand, and those of Bemba and Kabila senior, on the other, clashed, the rifle shots and rockets struck the village and our houses. The soldiers ransacked the houses and the church. They even thought we kept money hidden in the tabernacle. To avoid something worse, I left the tabernacle open and empty. I took the Blessed Sacrament to my room where I had set up a well-cared-for altar. One night, from 18:00 to 5:00, the battle raged with thousands of shots being fired and the forest set alight. The volleys of fire from the tanks passed above the house and exploded somewhere else.”

“All night long I lay on the floor gazing at the Blessed Sacrament. I kept very quiet, of course, and told Our Lord that it would be nice for us both to be buried together and go to heaven together. His presence would have ensured my admittance. In those moments, I experienced the presence of Christ very strongly. At other times, when we took refuge in the forest, I would take the Blessed Sacrament in my satchel and it was always a source of immense joy for me. His presence among us gave us surprising strength and courage.”

Father Alfredo concludes: “As I look back over my 34 years of missionary life in this land, I feel overcome by joy for the life I have lived. In moments of trials and sorrows, they give me peace and joy in my heart. I have been called to pass on, to give, to share and bring this joy to life in the people Our Lord allows me to meet”.

When David, Conchita and Alfredo were asked if they plan to ever leave Sudan and DR Congo, they respond in a similar way: “This is my home. I will stay as long as I can”.