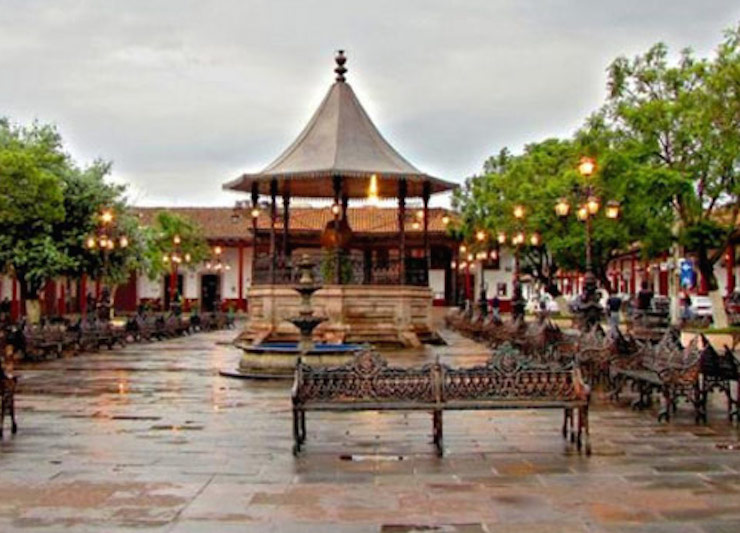 Santa Clara del Cobre, a picturesque pre-Hispanic town better known nationwide as the Copper Capital is located 17 kilometres from Patzcuaro in Mexico’s state of Michoacán. We visit the place.

Its original inhabitants, the Purepechas, were one of the pre-Columbian peoples who best worked with metals, particularly in copper, gold and silversmithing. They knew how to make alloys and it is even said that they had a form of money made of small copper disks.

The Purepechas made utilitarian copper objects like farming tools, pots and needles, among others. But they also made beautiful, purely decorative hammered objects. That innate human need to surround ourselves with beauty and art led them to preserve their artistic traditions when the Spaniards arrived, despite the fact that most of the copper taken from the mines was requisitioned by viceroyal officials. Today, that art is the main attraction of a town that preserves all the colour and ambience of its past.

Visiting Santa Clara is like traveling far back in time. Innumerable family workshops keep the craft tradition alive as well as the values that identify its inhabitants as a community The oldest and most experienced artisans teach and guide their younger family members; boys and male adults are apprentices. The respect and admiration for the master craftsman make it possible to preserve the wisdom of centuries that most people of today have not managed to value fully.

Santa Clara used to be an area rich in copper mines, but today, the raw materials for crafts are copper waste products still worked at forges with hand bellows, a fascinating spectacle to watch. The master craftsmen know exactly how much copper each piece requires.

In any workshop we visit, we see a shed-type structure that allows for the free flow of air, a circular, sunken hearth where a bed of ash is surrounded by stones or paranguas to hold the metal and, atop that, burning coal or pine. The fire is fed through clay tubes that pump air from the two-handed bellows. Once the copper has melted, the fire is removed and below are flat, thick rounds of copper, called tejos, that are then cut in pieces.

The most impressive part of the process is when the copper is extended and shaped, since this is done collectively: what most surprises the observer is the synchronization of the blows to the tejos. A journeyman holds the red hot tejo with a pair of tongs over the anvil; the master craftsman begins hitting it and five or more journeymen successively hit the same spot, following the master’s lead, since he is the one who knows how and where the metal should be beaten depending on the piece to be made.

Once the tejo has been extended, it has to be deepened rounded, using a tool called a candonga until it is the desired height. Then comes the individual work by each artisan to shape and polish his piece, using special hammers; and last, he decorates the piece, chiselling or engraving it or decorating it with graffito or relief work. The artisans make all their own tools.

Each piece is an exhibit in itself that demonstrates timeless dexterity and creativity. A single piece can take between 15 and 20 days to finish and is worth infinitely more than its sale price.

Santa Clara has not lost that distinctive character that attracts visitors. The kiosk in the main plaza is covered with sheets of copper. In addition to its two baroque churches, the town has two buildings in the plateresque style, both with impressive doors surrounded by round arches and pilasters.

On the main street, you can go to the Copper Museum, still, a living part of the town kept up by the inhabitants, that shows the evolution of copper art. Past and present come together in the objects displayed here amidst hues of red, among them items —the pride of their creators— that have won prizes at different state contests.

Every year, The Feria Nacional y Concurso del Cobre Martillado (National Festival and Competition of Hammered Copper) takes place in late August and/or early September, around the feast day of the town’s patron saint, Saint Clare (Santa Clara). This is one of the events that has earned the state of Michoacán its reputation as a fine crafts producer. The contest is the perfect opportunity to see the new contemporary and classical designs in copper smithing.

PreviousOral literature: Peace among the animals
NextSouth Sudan: Being part of a universal Church