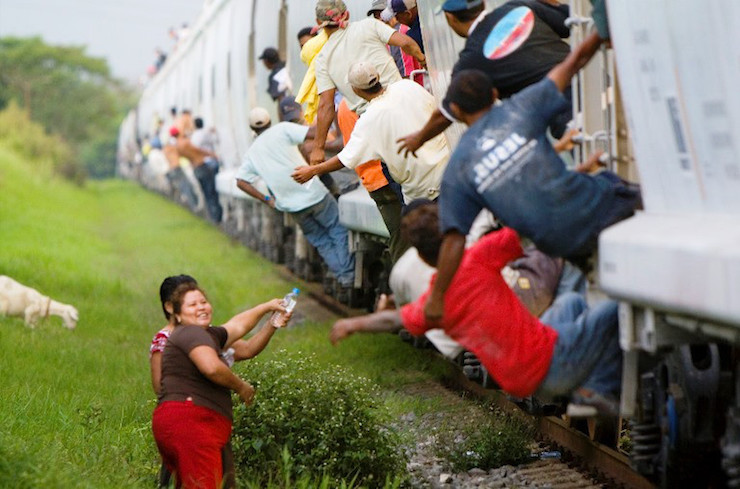 “Las Patronas”, a group of women who provide food and assistance to migrants crossing the centre of Veracruz in Eastern Mexico, will this month receive the Medal of Merit of the Universidad Veracruzana (UV). This will mark the central event of the International Fair of the University Book 2016, which will take place from April 22 – May 1.

Their lives are full of simple gestures to help immigrants every day. They expect nothing in return. They are the living conscience of a dramatic situation: that of the many Central Americans without documents, who travel every day on a train called “The Beast” or “The Train of Death” to achieve a dream that only a few will see come true.

They are known as “Las Patronas”, referring to the name of their town, La Patrona, in the state of Veracruz in Mexico. They are a group of women who for the past twenty years have been tossing bags of food and bottles of water to the immigrants on “The Beast” – when the train has to slow down and then stop at the town of La Patrona for a few hours.

Norma Romero, the co-ordinator of this women’s movement, explains how it all began. “One day I went with my sisters Rosa and Bernarda to buy bread and milk for breakfast. We were walking near the track where the train slows down. We saw a lot of young people looking at us. We thought they must be Mexicans in search of adventure. Most probably, we thought, they were not paying their fare. Then we began to hear people shouting: ‘We are hungry!’ We thought they were joking. Another carriage came along and some other youngsters began to shout: ‘We are hungry. Give us some bread and water’. Without stopping to think, my sister Rosa threw them the bag with the bread in it. Another carriage passed by with more young people in it, and she threw them the bag with the milk. We looked at one another, not knowing what to say. In silence we went home. Our mother asked us what we did with the bread and milk and we explained what happened. She said nothing except that she pitied those young people. As we spoke, we recalled the cries of those young people and my sister Bernarda said she thought they were not Mexicans but came from other countries.” The next day, the three sisters again went to the place where the train slowed down. They had biscuits and water. They put them in small plastic bags and threw them to the young people.

At home that evening, they started talking about what happened. Their father Crisoforo listened to them, and he too agreed they should do something. In those days bread, beans, and eggs were cheap. Eight tacos in each plastic bag. The next day they went back to the spot and threw the bags into the train. That day they threw thirty bags.

Helping undocumented immigrants is an offence and may lead to arrest and an appearance in court.

Rosa, another member of “Las Patronas”, recounts: “We knew that, but it didn’t matter to us. What concerned us most was helping those youngsters. To make them feel there was someone ready to help them on their way”. Soon, other families joined the three girls. They formed small groups. They managed to toss six or seven hundred bags a day. On Christmas Eve they provided more than a thousand. After a while, seeing all this movement, many people of the place began to place obstacles in the way of those women. Under pressure, some husbands forbade their wives to join the group. Only a few remained, but they were determined to continue.

As time passed, the group of women did not confine themselves to giving just food and drink, but began to help passengers who needed medical care. Norma says: “One day, when the train had stopped for a few minutes at La Patrona station, a young man ran towards us and told us his fiancé was unwell. We followed him, and there in the carriage was a girl covered with a blanket and shivering. I didn’t know what to do. I told the young man to wait there for me. I ran home and took my husband’s car. I was very much afraid the police might catch me and I would end up in jail. But I prayed, saying that if the Lord had placed me in this situation, He ought to help me. So I overcame my fears and drove to the train.”

“We took the girl and brought her in the car to the city hospital, where they immediately refused to help her; we then went to a private clinic but there, too, when they knew she had no documents, they refused to help her; we went to a doctor but he also refused to help, saying he did not want any trouble. Finally, I decided to bring her home; and with the help of a friendly nurse, we succeeded in helping her. Maria Isabel was from Guatemala and 19 years old. Slowly, she improved; and a week later, together with her fiancé, she again boarded the train heading for the United States.”

Every year, almost half a million Central Americans pass through Mexico on their way to the United States. It is a journey of more than 1,800 miles. More often than not, they have no documents with them – for fear of being deported if they are caught. Their greatest fear is to end up in the hands of criminal gangs seeking a ransom. Many are killed and thrown into common graves scattered along the journey.

According to the Mexican Commission for Human Rights, more than 21,000 migrants were kidnapped in 2013 alone. “One day,” Norma remembers, “Doña Fatima, from El Salvador, came to us. In her hand, she had a photo of a young lad of about fifteen. She asked me if I had seen him. She had not heard from her son Miguel for more than a year. I have heard the same story many times. There are so many young men who disappear!”

After a new law, “A Plan for the Southern Frontier”, was passed last year, it is now forbidden to travel by train. “But we will continue to help. The migrants are looking for other ways to reach the border with the United States. Our city of La Patrona is an important transit point on the northern journey. The immigrants know that they will find someone here willing to help them.” Today, the women run a small hospitality centre.

Last year, they marked twenty years of activism. Norma said: “People often ask me why I do it. I am a catechist in the parish. I have always asked God to help me to be involved with others. I wanted to do more than catechism. And so, without looking for it, all it took was to toss a bag with a little bread to a hungry person to begin this work of mine – and ours – on behalf of needy people. In the past twenty years, we have gone through difficult situations! But I always trusted in God, who always tells me: ‘Keep up the good work!’”.

PreviousNepal: “Tashi Delek!” – I hope you are well!
NextEquatorial Guinea: The Village Clown