Pope Francis to Teens: “Love is the Christian identity card” 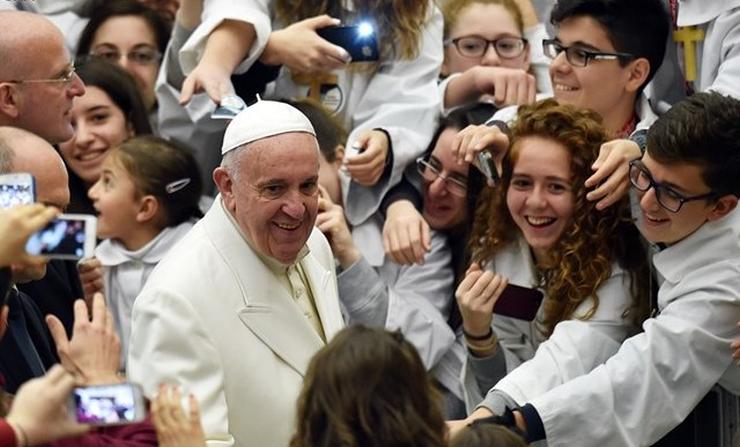 At the heart of Pope Francis’ message during the Jubilee Mass for Teens, celebrated on Sunday 24th April, was quite simply one word: love.

The Pope told the thousands of 13-16 year-olds gathered in St Peter’s Square that “love is the Christian’s identity card, the only valid ‘document’ identifying us as Christians. If this card expires and is not constantly renewed, we stop being witnesses of the Master”.

He asked the teenagers gathered, “Do you want to experience the love of Jesus? Let us learn from him, for his words are a school of life, a school where we learn to love”.

The Holy Father noted, however, that although love is beautiful and it is the path to happiness, it is not necessarily an easy path. It is demanding and it requires effort.

The Lord, Pope Francis stressed, is generous: “He offers us his faithful friendship, which he will never take back. Even if you disappoint him and walk away from him, Jesus continues to want the best for you and to remain close to you; he believes in you even more than you believe in yourself.” This is very important, the Pope continued, because “the biggest threat to growing up well comes from thinking that no one cares about us, from feeling that we are all alone”.

During his homily, the Pope also warned the teens present to be on their guard against what he called “an instinctive desire to ‘have to have’ what we find pleasing”, adding, “our consumerist culture reinforces this tendency”.

“Don’t be content with mediocrity, with ‘simply going with the flow’, with being comfortable and laid back,” the Holy Father said. He also told the teenagers to be sceptical about “people who want to make you believe that you are only important if you act tough like the heroes in films or if you wear the latest fashions.” Your happiness, the Pope continued, has no price. “It cannot be bought: it is not an app that you can download on your phones – nor will the latest update bring you freedom and grandeur in love”.

Pope Francis invited those present in St Peter’s Square to be courageous and firm in their decisions, reasoning that it is only by doing this that they will realise their greatest dreams. He added: “if a person of your age can’t dream, they are already in retirement; this serves nothing”.

Love does not happen because we talk about it, the Pope emphasised – “but when we live it”. He also said: “In the art of climbing, the important thing is not to remain on the ground when you fall”.

The Holy Father concluded his homily by saying to the teenagers: “you will do amazing things if you prepare well, starting now, by living your youth and all its gifts to the fullest and without fear of hard work. Be like sporting champions, who attain high goals by quiet daily effort and practice”.

PreviousThe Pope in the Caucasus Region: Messenger of Dialogue and Peace
NextAsia: The Triple Dialogue of the Missionary Church