The Street Children of New Delhi, India: In Search of their Future 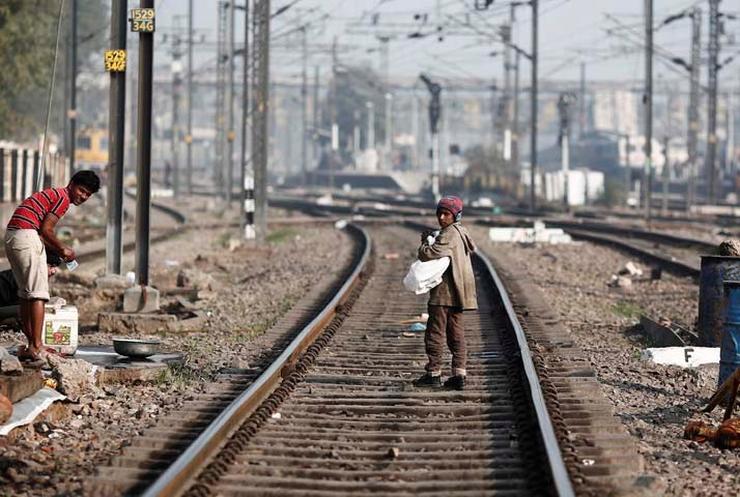 The train station is their small city; the street is their home; friends are their family. These are the stories of the street children of New Delhi.

Tajdar is 12 years old, and he cannot even remember when he started to live on the street. He arrived in New Delhi with his cousin Dakshi, who is a little older than him. We meet Tajdar at the central station, in the old town. “The station is a good place to stay”, he tells us, while we walk between the tracks. “We have more chances to get something to eat here, where there are many people coming and going every day.” Then he looks at a train which is leaving the station slowly, and adds: “Sometimes, when I play, I pretend to be a station master. I dream of travelling in the future”.

There are many other boys and girls who, like Tajdar, live in the train station area. “The railway station is like a small town for these children,” says Fahad Bhatia, a teacher who works for a children’s education NGO. “There are fans, a parking lot, drinking water, bathrooms, and even food, which can be found at any time and is not expensive. The boys offer to carry the passengers’ luggage to get a tip. Some kids come from far away; when they arrive, they first try to get in touch with their relatives; if they cannot find them, they come back here and start to live in the station area.”

Some incredible stories can unfold at train stations. Yadan tells us: “I was five years old when my parents and I went on a religious pilgrimage. All of a sudden I got lost; I could not see my parents anywhere. I began to scream and cry; people were pushing me. I found myself alone. Maaran then took me by the hand and led me to the capital. I have lived here for seven years now. I still hope to see my mother and my father’s face among the crowd sooner or later, but a long time has passed …”

Another boy, Gadin, is looking at us with curiosity. We ask him for his age, but he tells us that he knows neither his age nor how long he has been living on the street.

There is no clear data about the number of street children in New Delhi. Some NGOs estimate that they number about 51,000. According to the police, a child goes missing every eight minutes in India. The police believe that disappearances are linked to human trafficking. 45 percent of missing children vanish, with no trace left behind – slaves of traffickers.

As we emerge from the crowded station, we can see many young boys around. They are talking with Fari, who has been working for an NGO for several years. “Kids who run away from home are often victims of domestic violence. The street, therefore, becomes their home and friends their new family; and they feel protected”, he explains.

About 23 percent of street children are rag pickers. They sift through garbage in order to collect recyclable material to re-sell for a few rupees per kilo. You can see them carrying their heavy load in a large bag over their shoulder. Another 15 percent are hawkers, and as many live on begging.

It is difficult to see girls on the streets. They are doomed to be exploited on the sex market. About 55 percent of missing persons are girls who are forced into prostitution.

Drug use is another serious problem. Kaamil says: “When I was a street child I was able to get myself alcohol and marijuana. My friends and I also sniffed glue; it made us feel like adults”. Fari confirms: “Drug dependence keeps these young people chained to the street – sometimes with the complicity of some protectors who use them as slaves for their business”.

Balaknama, or ‘Children’s Voice’, is a publication backed by the Indian non-profit organisation Chetna, which was first published in September 2014. This newspaper is completely run and written by children living in New Delhi’s slums, who were able to get out of the tunnel of drugs and abandonment. Indian readers have access to a remarkable newspaper for the price of just 1 rupee (1 pence), with stories and pictures written and taken entirely by former street children. The NGO Chetna helps to cover the cost of Balaknama, and the child reporters get paid. The pages of this quarterly publication contain articles related to topics like exploitation of minors, carelessness, attacks and psychological intimidation by police officers, and forced marriages – a range of serious subjects that highlight the problems faced by Indian street children. With a readership in the tens of thousands, the newspaper is being hailed as one of the most impressive of its kind in the world. A piece of hope for these children who are trying to create a new future … far away from the streets.