Brazil: The Gospel of Mercy Behind Bars 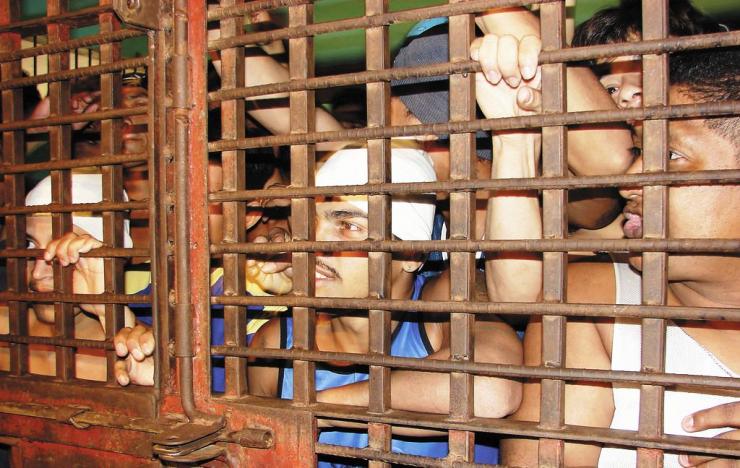 Having been a Comboni Missionary for more than thirty years, Father Saverio Paolillo defends the human rights of young people imprisoned in Brazil’s youth prison.

Taking advantage of a pause in the incessant autumn rains, I made my usual visit to the Educational Centre for Youth in João Pessoa, the capital of the State of Paraíba in north-east Brazil. The site is meant to be a rehabilitation centre for minors convicted of crimes, but its structure is often compared to underground medieval prisons. Built in the seventies, the centre has capacity for a maximum of 70 youths, but it usually houses around 160 on average. The youths are locked in cells with no ventilation, very little light, and soundproof walls. The ceiling is full of cracks. The mattresses are piled up in the courtyard to dry in the sun. There is rubbish everywhere, and a strong smell of sewage. At cleaning time, some wash the floors while others clean the sheets spread out on the ground. They have to be quick, as water is available only three times a day for fifteen minutes. In that time, they have to shower, clean the toilets, and do their washing. They should really be at school, but the teachers are on strike, having had their pay withheld for three months.

I stop outside every cell, as I have been doing for thirty years. They all have a story to tell, especially when they find someone willing to listen to them with respect. I reach inside the bars and shake hands with them all. I call them by name, greet them, and listen to them attentively. They are fed with being locked in cells measuring just a few square metres all day, with nothing else to do. They tell me they go out into the courtyard three times a week for half an hour. They all complain about the food. Some speak of the recent visitors they’ve had, while others lament that their families live too far away to visit or have no money for the fare. They ask me questions. They want to know about their court cases. They report the attacks on them by the warders. I take note of everything they say. I take some photographs of the place, in particular of the bruises which they allege have been caused by the wardens. Some ask for help but I cannot provide everything. Often, I have to shrug my shoulders to show there is nothing I can do. I take from my satchel the dozens of reports I have already sent to the judge for minors reporting the situation, but I have to admit the results are poor. They ask me to pray with me. I read a passage from the Gospel and speak of the love of God for each one of us, and some add their own reflections. At the end, they all pray for their families and friends and, most of all, for a second chance. They all dream of getting out of that hell as soon as possible.

I come in at 10am and leave at 4pm. I get in my car. It will take me at least two days to digest all I have heard and seen. My heart is torn by so many different feelings. The strongest is anger. I cannot be indifferent faced with all that is happening to the youth of Brazil. Throughout the country there are 23,000 youths, between 12 and 18 years old, locked up in prisons for minors which, with a few rare exceptions, amount to social coffins in which all human dignity is buried.

These boys, in spite of everything, are ‘lucky’, as they are still alive. In 2015, more than 30,000 young people aged between 15 and 29 years of age were killed. Of these, almost 4,000 were boys aged 16 or 17. Almost all the youths who were killed were poor, black, and living in areas around cities that have been abandoned by state institutions and governed by the drug trade.

What is happening is nothing less than the extermination of Brazil’s youth. We must stop this bloodshed. Let us play our part by carrying out projects aimed at vulnerable minors, in conformity with the doctrine of the integral protection, defence, and promotion of human rights; motivation for leadership; and the practice of citizenship. Once I reach home, I put my notes in order, insert the photos, and prepare the latest report to present to the authorities. During the coming days I will be on my pilgrimage to various offices, seeking legal help to investigate the violation of the human rights of these youths. I make their cry heard in society so that they may receive the help they need to change their lives.

There are many who criticise me, accusing me of defending bandits. I often receive death threats but I am used to that by now. In Brazil, laws are being prepared to criminalise human rights defenders, sponsored mostly by the media. I have never approved of the crimes committed by the youths. It causes me pain to see them involved in crime, especially when, by their violent acts, they offend the dignity of other people. But I refuse to accept this. The word “lost” is not in my vocabulary. I believe in humans and in their ability to change. Change is possible, especially when there are people ready to lend a hand. A person cannot be defined merely by what they do. Each human being is worth much more than the crimes they may have committed. Each person has an intrinsic dignity, which is always waiting for the chance to emerge. I am certain that the most effective way to defeat violence is to guarantee fundamental human rights for all, especially the right to live together in a family, surrounded by a deep experience of love.

The youths I have seen in the prisons and those I meet in the shanty town where I have chosen to live have never had anyone to take care of them. Left to fend for themselves within days of being born, deprived of their rights almost all of the time, they do not know what it means to be loved, acknowledged, or respected. Some of them do not consider themselves worthy of being loved. Our missionary work in the prisons for minors must break this cycle of abandonment, indifference and marginalisation by means of a presence that allows the merciful love of God to shine through. In our pastoral work, acts speak louder than words. One of the things that surprise the youths is the way we look at them. Used as they are to being looked upon with contempt, they see in our gaze a look of love capable of going beyond appearances to the intrinsic worth of each individual. We never ask about the crimes they committed. They have already been asked those questions when they were interrogated by the police. We are not interested in the past. What matters to us is that it is possible to build something new starting here and now. To set in motion this process of building up their lives again, it is essential for them to meet people who will take care of them with a love that fosters autonomy, freedom and responsibility.